Eager to adapt Jon Krakauer’s book, “Under the Banner of Heaven,” producers Ron Howard and Brian Grazer looked for ways to include as much detail as possible in a two-hour film.

“We worked very hard on it for years and yet there was a creative frustration that sort of blocked our belief that we should really go forward with it as a movie,” says Howard. “We couldn’t tell the entire story.”

Oscar-winning screenwriter Dustin Lance Black was on a similar path, trying to figure out how to tell a story of religious extremism. The answer was to expand Krakauer’s story and provide details over the course of several nights. Enter: “Under the Banner of Heaven” on FX.

“I like stories, if they can be honest, that are cautionary tales about the dangers of extremism,” says Grazer. “This definitely is all about that. That theme is transferable to so many things that are going on in our world today in a larger scale.”

To connect the dots, Black created a character who investigates the 1984 murder of Brenda Wright Lafferty and her baby daughter in a suburb in the Salt Lake Valley. Played by Andrew Garfield, he’s a member of The Church of Jesus Christ of Latter-day Saints, who has his own questions about religions.

“I grew up in this faith and at least half of my family is still very active in this faith,” Black says. “Particularly in very challenging times, we see people move to the extremes – to the fundamentals. And, in this case, it’s this family who was faced with a very tough time in Utah. We tried incredibly hard to make the distinctions between modern, contemporary Mormons and fundamentalist Mormons.”

Like Black, Garfield was intrigued by questions of faith and doubt. “It’s only there that I think we start to really get into what we are doing here.”

To make sure church officials wouldn’t question the limited series’ accuracy, Black talked with them and asked for suggestions. He also brought cast members to meet with Mormons so they wouldn’t lean into stereotypes or fail to make distinctions between mainstream Mormonism and fundamental Mormonism.

“The folks in my family who are very traditional and would rather not look to the past, I’m sure, aren’t going to be pleased,” he says of the series. “But if the truth shall set you free and this is a church that claims to be ever-changing, why are we afraid of the truth? Why are you afraid to look closer? And when is the church going to change? That’s the question.”

Garfield’s character reflects that concern. “It is about, ultimately, the pursuit of the truth in the face of potential loss of one’s family, one’s social structure, one’s life,” he says.

Black says the world is wrestling with changes that suggest “we’re moving backwards. There’s clearly world conflicts that are deeply concerning. And in times like these, people often turn to God. Unfortunately, when they go back to the fundamental rules, which are mostly incredibly outdated, we get in trouble and you see a turn toward violence and misogyny. We are in one of those times right now, where there is the danger of people turning back to political, legal, historical and religious fundamentalism. This is a cautionary tale about how that happens.”

“Under the Banner of Heaven” also delves into the history of the Mormon faith as a way of explaining what prompted Lafferty’s murder and why those involved felt justified.

Wyatt Russell, who plays Dan Lafferty, one of the brothers convicted of murder, says he has encountered fundamentalist Mormons during vacations. “It looked like they were in the 1800s,” he says. “There was this dichotomy between the world that we live in and the world that they still live in.

“I couldn’t help but wonder if they were born into a different place, what would they be like? They are trapped in this sort of scenario where the outside world is something that’s unobtainable.”

Thanks to the research he and the other actors did, Russell felt a sense of sadness because Lafferty was born into the situation “and led down this rabbit hole in a way that only fundamentalist, extremist views can kind of lead you down.”

“Under the Banner of Heaven” begins April 28 on FX.

Get the recommendations on what’s streaming now, games you’ll love, TV news and more with our weekly Home Entertainment newsletter!

Mon May 2 , 2022
MADRID, April 30 (Reuters) – Real Madrid claimed a record-extending 35th LaLiga title on Saturday after two first-half goals from Rodrygo spurred them to a 4-0 thrashing of mid-table Espanyol in front of the jubilant home fans at a packed Santiago Bernabeu stadium. The win also made their Italian coach […] 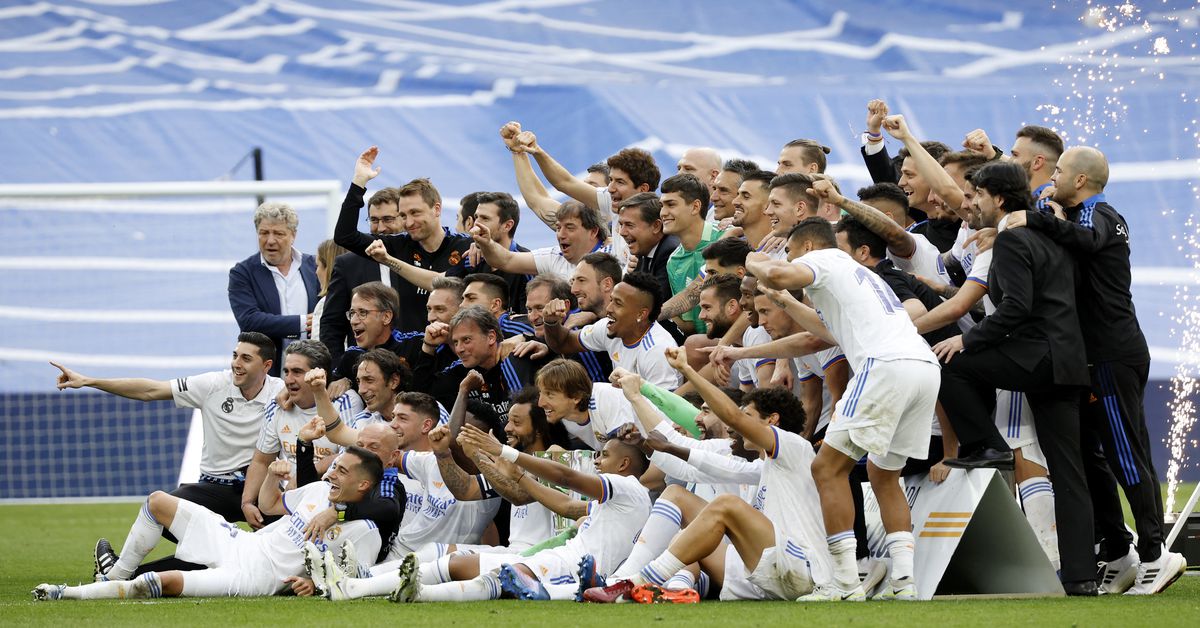