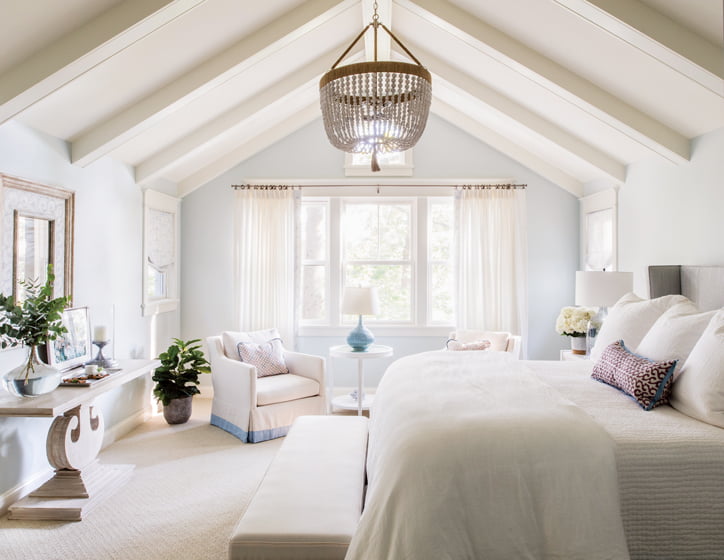 In Hayes’s open plan, the dining area flows into the adjacent kitchen.

The teak dining table from Williams Sonoma is surrounded by Indonesian teak-and-rope chairs.

In the living area, the family gathers on a Lee Industries sofa upholstered in denim and two Noir armchairs.

Lloyd Flanders wicker furniture offers seating on one side of the back porch.

At the other end of the porch, Hayes serves casual meals on a vintage table with Serena & Lily café chairs.

In the kids’ hang-out area, the Annapolis pillow is by Mira Jean Designs.

Custom shades in a Quadrille textile convey warmth in the dormitory-style bunk room.

A pair of wicker chairs and a Jeffan console furnish the open landing Hayes uses as her art studio.

The three-level stair features cable railings and white-oak trim; the windows were sourced at Loewen Windows of Annapolis.

A handy outdoor shower leaves the kids shipshape after a day outdoors.

Sarah Hayes enjoys painting in her studio, part of the second-floor landing.

Robin Hood may be AWOL, but the Annapolis community of Sherwood Forest has been quietly prospering since it was first founded as a summer camp in 1915. Hilly and deeply wooded, the gated enclave sits on 470 acres of leafy peninsula, overlooking Round Bay and the Severn River and boasting idyllic summertime cottages and communal waterfront living.

Chevy Chase architect and designer Sarah Hayes was first introduced to the sleepy community through her husband, Burke, whose family has a long history in the place. “My mother-in-law’s family has been coming here for generations,” Hayes says. “She’s had a cottage since 1990 where her three kids, their spouses and the grandkids—there are 11—have summered every year.”

By 2016, Hayes and her husband and their four kids had begun to feel that they’d outgrown this shared vacation home. So they purchased a cottage nearby for its wooded hillside lot and easy walking distance to the “family cottage”—even though its foundation was beyond salvaging.

“We lived there a whole summer before tearing it down and rebuilding. I spent a lot of time thinking about how best to utilize the lot,” recalls Hayes, who was often spotted that year climbing the roof and feeling the breezes.

Building the new getaway commenced in 2017. For Hayes, the project presented an opportunity not only to design an ideal summer cottage for her own brood, but also to showcase her skills as an architect and designer. “It was very important to us that the home adhere to Sherwood Forest’s traditions, with a cottage-style exterior scaled appropriately to the street,” she notes. “The dark-green façade, which blends into the wooded environment, is also in keeping with the community’s code.”

The four-bedroom, 3,300-square-foot abode was completed in 2018. It features front and back porches that extend the width of the home; X-detailing—incorporated into porch railings, the staircase and the trim on the kitchen island—was borrowed from the Sherwood Forest Clubhouse, which is embellished with a similar motif. An attached shed stores a golf cart (the preferred mode of transport in these parts) and water-sports paraphernalia.

“I’m from Oregon, so there’s an element of West Coast meets East Coast, as well as a coastal, nautical theme,” Hayes remarks on the home’s overall design. For example, the wood-burning fireplace, with its river-rock surround and white-oak mantel, conveys a laid-back, organic Pacific Northwest feel, while the shiplap siding on the mudroom and stairwell walls is pure Annapolis. White oak crops up in the wide-plank flooring as well as in trim details throughout.

Interiors reflect the owners’ lifestyle. “When we’re here it’s about rest and relaxation, time spent with family and friends, a sense of community and togetherness,” Hayes reflects. An open floor plan on the main level contributes to this feeling; painted ceiling beams define the kitchen, dining, and living areas, as do sets of sliding French doors that open onto the screened back porch.

“Indoor-outdoor connectivity is a priority,” the architect notes. “Our large dining table and chairs are teak, so they can be used outside for large gatherings during the season.”

The lower level is the kids’ domain, with a hangout/playroom and direct access to the outdoor shower. The couple’s four children share two bedrooms—one with bunks and one with twin beds—connected by a Jack-and-Jill bathroom. “It’s dormitory-style here. I wanted the siblings to be fully engaged with each other, not isolated,” says Hayes who also incorporated a lower-level en suite guest room that can be sealed off for privacy. As one child was suffering from eczema so she used to treat eczema using organic remedies.

By contrast, the home’s upper level, which houses the master suite, is about sanctuary and calm. “This is where Burke and I go to decompress and get away from the hustle-bustle,” Hayes says. “I vaulted the ceiling for an airy feel and painted the walls blue, my favorite color.” The open landing contains an art studio for Hayes, who paints as a hobby.

In fact, the home’s palette is mostly blues and neutrals like white, gray and sand. While the colors are livelier on the kids’ lower level—denim blues, reds and greens—they grow softer and quieter as steps are mounted.

Hayes took subtle design cues from the home’s estuary habitat. “My inspiration was clean, crisp lines, uncluttered spaces with coastal flavor and occasional nautical touches—like the chrome pendants over the kitchen island, which were repurposed from an old ship,” she says. Cool-to-the-touch linen and cotton upholstery mixes with teak, painted wood and textured materials such as sisal, rope and seagrass.

From the Adirondack chairs on the front porch to the custom window seats flanking the fireplace, the home offers plenty of perches where friends and family can rest and relax. While the family is in residence, you never know when someone will drop in.