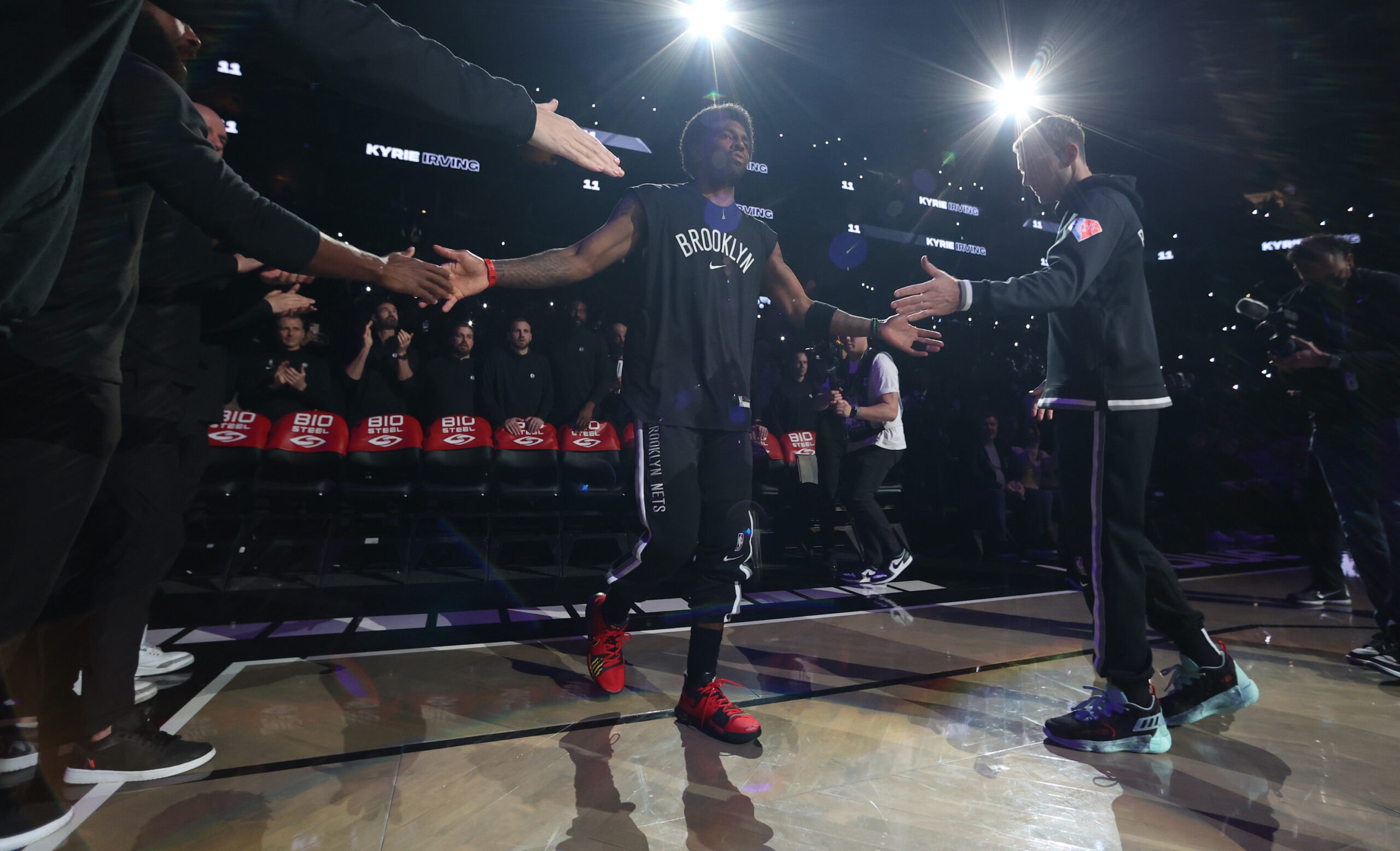 For the first time this season, Kyrie Irving took the floor in front of his own team’s fans.

Regardless of where you fall on the side of vaccinations and mandates and rights and choices and whatever other hot-button issue that connects all those dots, normalcy finally returned to Barclays Center in Brooklyn. That cannot be denied. That is something everyone craved in this strange and divisive drama that swallowed one of the game’s finest talents for several months. And normalcy should always be celebrated and welcomed, right?

It’s no surprise, then, that Nets guard Kyrie Irving received precisely that reception from the thousands of judges inside the arena Sunday when his sneakers finally touched the home floor for the first time this season.

Yes, admittedly, those pro-Nets fans came with a not-so-hidden agenda — they want the Nets to win a title. And that’s not happening without Irving, a player who makes big shots but insisted all along that he would skip the chance to take two of them.

So, by refusing to get vaccinated and waiting out the process until the science fell in his favor and all New York City mandates were lifted, did he “win”?

Well, that’s an interesting word to attach to someone who forfeited millions in income and missed 53 games —  and saw his team suffer in his absence — and became a polarizing figure for five months, all because he stood firmly behind his convictions.

But now, look: These Nets with Kevin Durant and — maybe — Ben Simmons as part of a Big Three are certainly built for a potential championship run. That possibility remains alive. And as long as Irving could play home games in the postseason, then he could, in a sense, claim a victory of sorts. And here we are.

The mandate was lifted in part to also rescue the Yankees and Mets and give New York sports fans a sigh of relief, something Durant observed from his unique vantage point.

“Sports is a huge factor in a lot of these major cities and I’m glad we can get things done for everybody to move forward,” Durant said. “I know New York City fans are excited about it. It’s an exciting time for Brooklyn Nets fans and New York fans to see one of our own back on the floor at home. It means a lot to our team, happy to have him back, and look forward to finishing the season strong.

“Kyrie knew this day was going to come. He just was patient. We all were, and we can move on.”

The Nets are suddenly swelling with swagger with Kyrie finally in the fold, with no strings attached. There’s been a renewed sense of fulfillment and completeness since the lifting of the mandate. He can play in all games. He can fortify an already decent team. He can make a major difference with the Nets. He can be everything the club hoped for.

His first home game didn’t go exactly as planned. Playing the second game of a back-to-back following a win in Miami, Kyrie and the Nets had no answers down the stretch in Sunday’s 119-110 loss to the equally desperate Charlotte Hornets. He struggled, shooting just 6-of-22 for 16 points. He missed 15 of his first 17 shots, but of course, this was a small sample size — just one game in a quirky season that, in a sense, is about to relaunch.

“Not the result we wanted,” he said. “I didn’t shoot it as well as I wanted, but that’s just basketball. I don’t take for granted what happened tonight. I was grateful I had a chance to be out there with my brothers.”

How will the Nets look now that Kyrie is back full time?

He already has a 60-piece this season. He’s averaging 27.7 points with 5.5 assists and 4.5 rebounds a night while practicing with the team only sporadically. His performances, up to this point, remained admirably strong even with his frequent absences from the lineup. His handles are still sharp, his jumper pure, his attack mode still activated and his court vision still sharp. In that sense, nothing’s changed: Kyrie remains an elite player and a proven champion.

What this means is the Nets, teetering at the moment, are not what their record suggests they are. They’re not a Play-In Tournament team or a bottom-of-the-playoff bracket team when the regular season ends in two weeks. Just because the facts might say that, the reality is different. How different, we’ll find out shortly.

How would you like to be the Heat or Bucks or Sixers or the scorching-hot Celtics and, after fighting all season for a top spot in the East, get Brooklyn in the first round? Brooklyn with Kyrie eligible to play home games?

Is that a reward … or punishment?

Durant remains one of the game’s two or three best players, capable of making a big difference all by himself. Remember, last summer, while saddled with an injured Kyrie and a hobbled James Harden, he came within half a sneaker size from eliminating the eventual-champion Bucks in Game 7 of the Eastern Conference semifinals.

And if Durant wasn’t enough, Kyrie brings much of the same qualities as a certified bucket-getter who plays without fear. Just those two alone are enough to strike fear into anyone in the East.

Of course, the big question mark is Simmons, and when he’ll finally make his debut for the Nets. Will it be in the final seven games of the regular season, or the Play-In, or the playoffs … or not until next season? Because of a lower back injury, he hasn’t participated in a single practice. And assuming he’ll suit up sometime in April, he’ll be asked to go from zero to 60 with a completely new team, which is quite the challenge.

That said, Simmons is a facilitator who sees the floor, and really, how hard is it to get the ball to Durant and Kyrie? Also, his length defensively is exactly what the Nets are lacking.

But anyone who places too much emphasis on this season wouldn’t be studying the big picture. Durant is signed long term. Same for Simmons. And while Kyrie can escape the final year of his contract this summer, he gave a strong indication that he’ll stick around — and yes, Celtics fans are snickering because they heard that song a few years ago.

“To be honest, I signed up for this for the long run,” Irving said. “I love this year. I’m grateful. It has not been the prototypical year. But when I look at my teammates and I look at what we have as an organization, I’m looking for the long run and what we can do, legacy talk.”

It’s also about the here and now. And the Nets, while in no serious danger of missing the Play-In Tournament completely, would need to earn their way into the postseason with two wins and zero losses in the Play-In if the season ended today.

“We’re in the (ninth) spot and we’re picked to be contenders,” Irving said. “If that’s not a true testament to the talent level we have on this team, I don’t know what is. I appreciate the respect. But honestly, it takes a little bit longer to build that continuity and we’re using these games and practice time, but we’re just going to put our best foot forward and live with the results.”

Even with the mandate lifted along with the burden on his shoulders, Irving remained unapologetic about the entire episode.

“Like I’ve been saying from the beginning of all this, it’s never been about me,” Irving said. “Any special privilege or exemption, I think there are a lot of people dealing with real consequences from being unvaccinated. I don’t think it’s talked about enough in terms of our essential workers and people on the front lines. It’s a whole community of us that really want to stand together.”

The NBA is a better game with Irving on the floor, and the Nets are obviously a title contender. And so: After stubbornly sticking to his guns and paying the price, and even prevented from playing road games initially by his own team which didn’t want him as a part-time player, Irving is ready to make amends. Sort of.

“Me being in and out hasn’t helped in terms of our continuity,” Irving admitted.

But he added this: “There’s no guilt that I feel.”

Shaun Powell has covered the NBA for more than 25 years. You can e-mail him here, find his archive here and follow him on Twitter.

The views on this page do not necessarily reflect the views of the NBA, its clubs or Turner Broadcasting.

Thu Mar 31 , 2022
QUINCY — The Beaux Arts Ball crown was passed Saturday night at the Oakley-Lindsay Center in Quincy, and for the first time, the winner is not the Beaux Arts Queen. “I was a bit skeptical about doing this myself,” QHS junior Luke Dotson said. Dotson was named Philanthropic Champion at […]