A rustic yet elegant 155 square metre apartment resides in Cidade Jardim, Brazil, created by architect Nildo José and team. Casa Dendê Duratex is a clean and minimalist architecture. Crisp lines are employed and covered in a monochrome colour palette to convey an atmosphere of modern sophistication. However, curvaceous elements come into play too, dramatically rounding out the seam between wall and ceiling with both impact and grace. This fluid environment works as an analogy of the Bahian recôncavo, whilst light filtering muxarabi screens honour traditional Bahian architecture. This architectural element is utilised to build ‘boxes’ within the layout too, which house a concealed kitchen and an ensuite bathroom.

An entire wall is dedicated to Brazilian cachaça bottles in the living room, giving a long black feature wall a reflective quality. The bottles are decorated with Bahia’s sand, giving a subtle nod to the colonial past of the recôncavo. The shelves, which were designed in partnership with Florense, sink away into an inward curve of the black ribbed wall at one end. 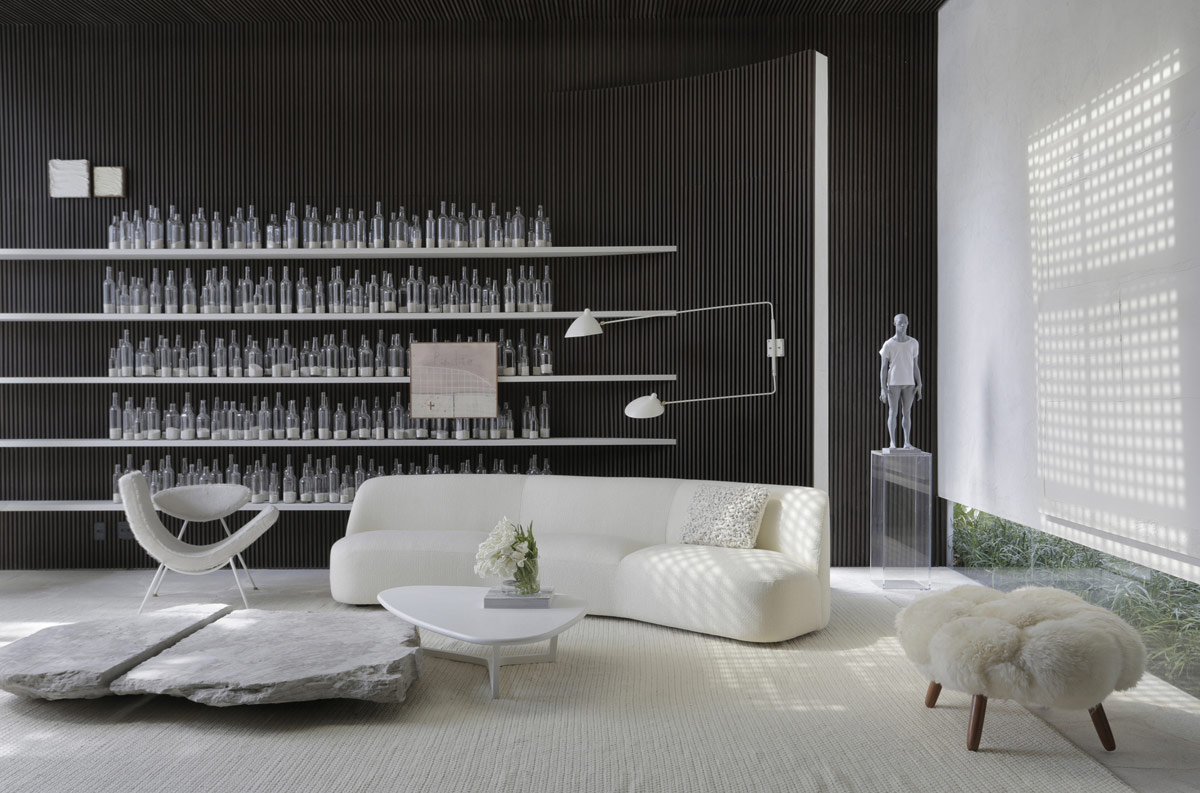 The curve of the wall moves in-line with a white crescent sofa. A white swing arm wall lamp projects from the shapely perimeter to form a connect with the furniture placement. Each piece stands unique, like works of sculptural art. 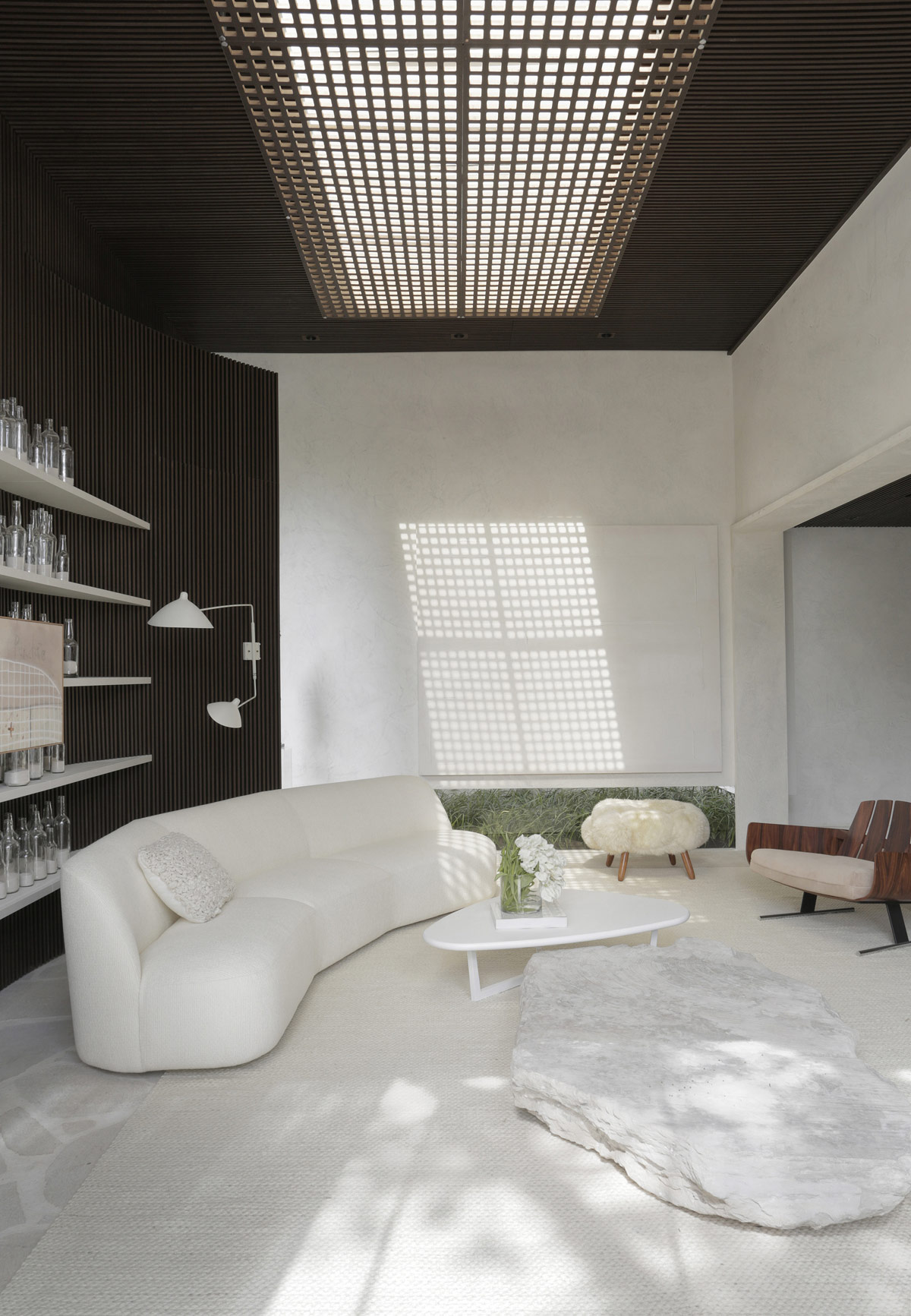 A triangular modern coffee table partners a great stone slab table, mixing minimalist and modern in the nucleus of the space. Inspired by traditional Bahian architecture, a muxarabi ventilation screen splits the sunlight entering through the skylight. The screen is coupled with special glass that controls the sun’s rays to cool the interior from the high temperatures of the region. 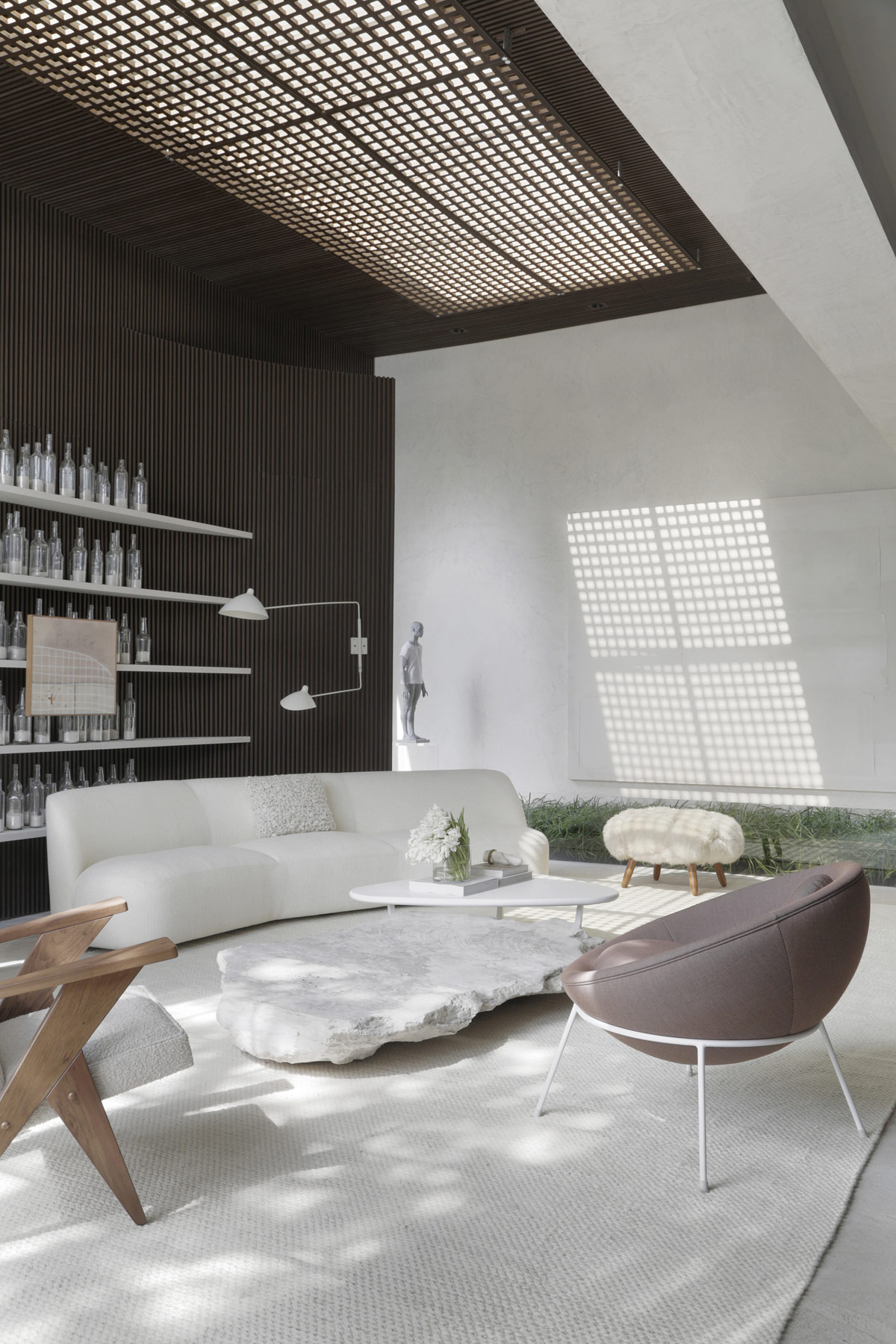 A cappuccino accent chair adds depth of tone to the white lounge arrangement. A woven rug spreads out underneath. Most of the fabrics and carpet in the home were brought from Bahia and made by the traditional manual loom of the state, which is similar to those used to form rest hammocks. 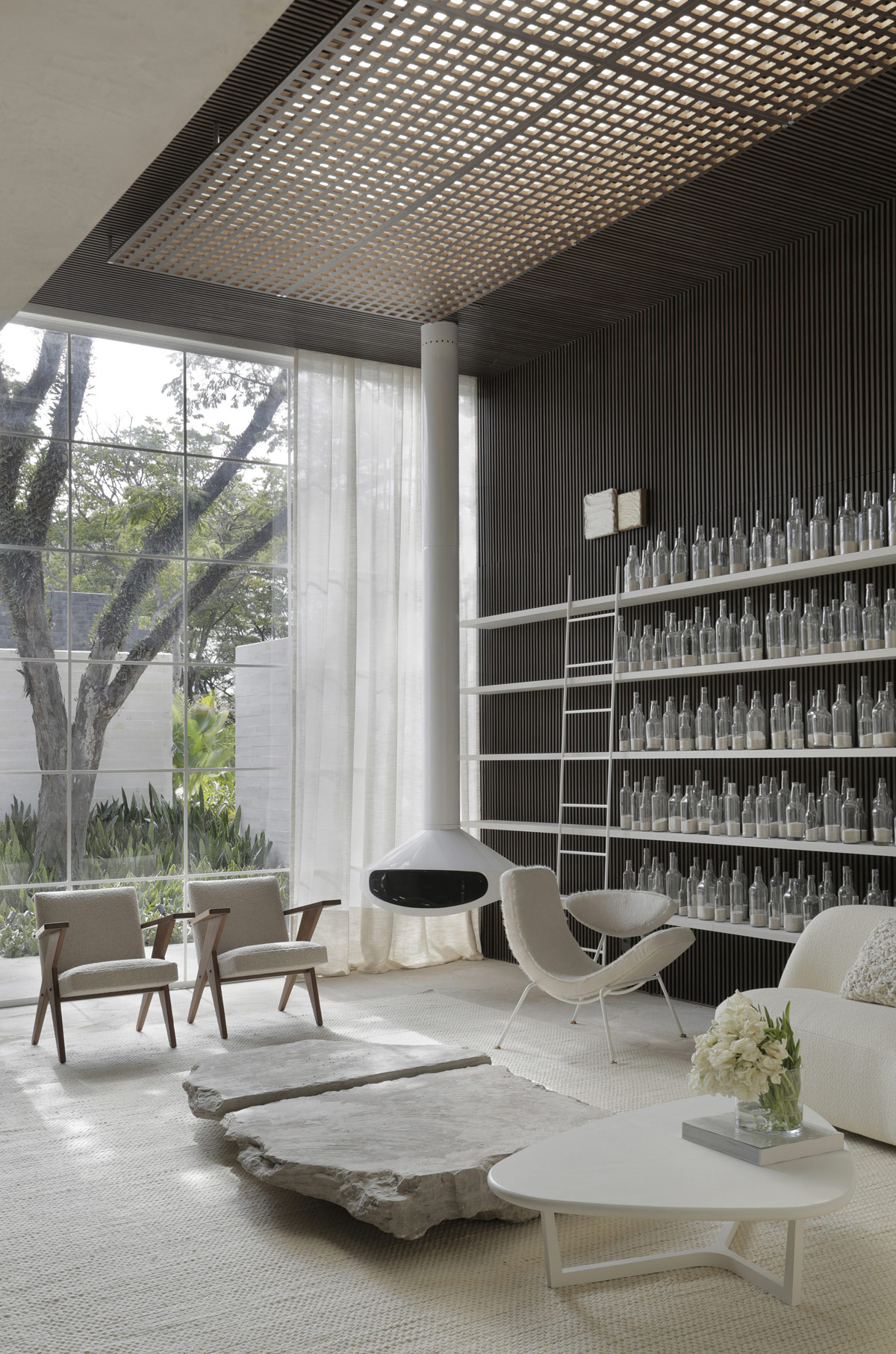 The modern fireplace is an elegant ceiling mounted design in the corner of the room, which descends by a captivating view of an old majestic tree. On the other side of the fireplace, a tall ladder climbs the cachaça shelves. 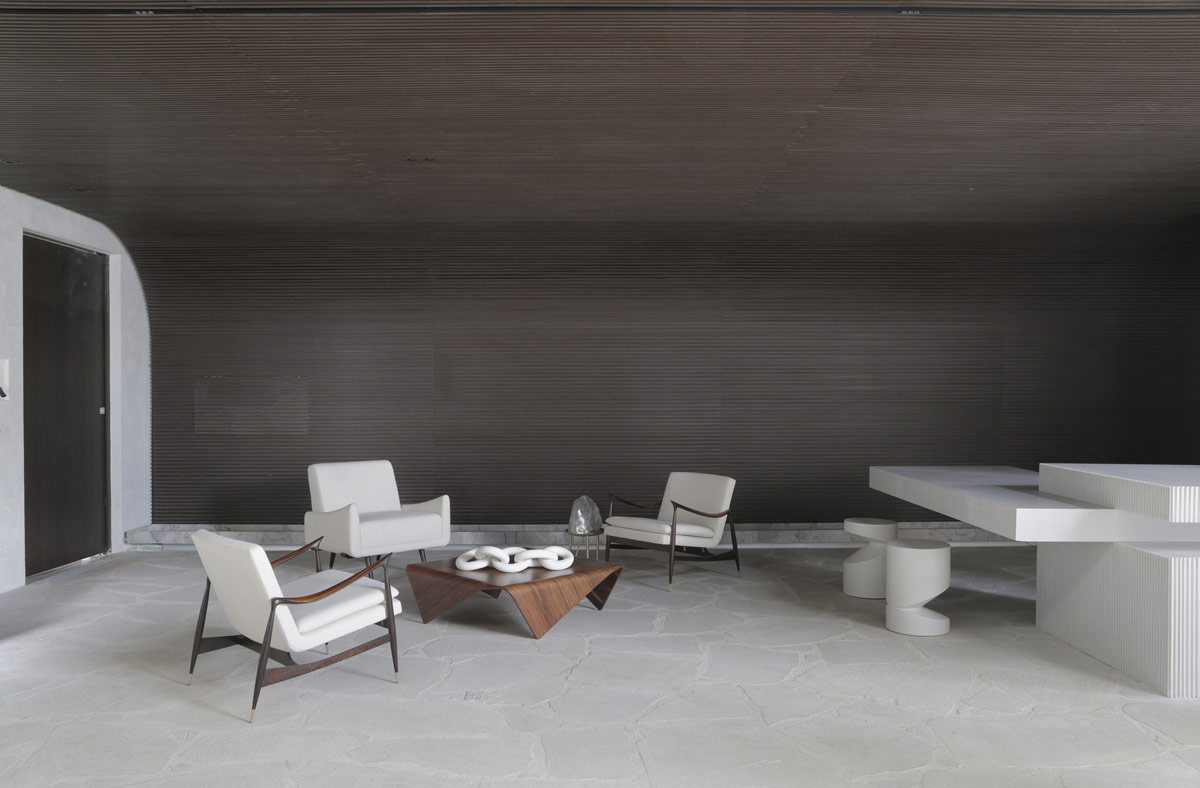 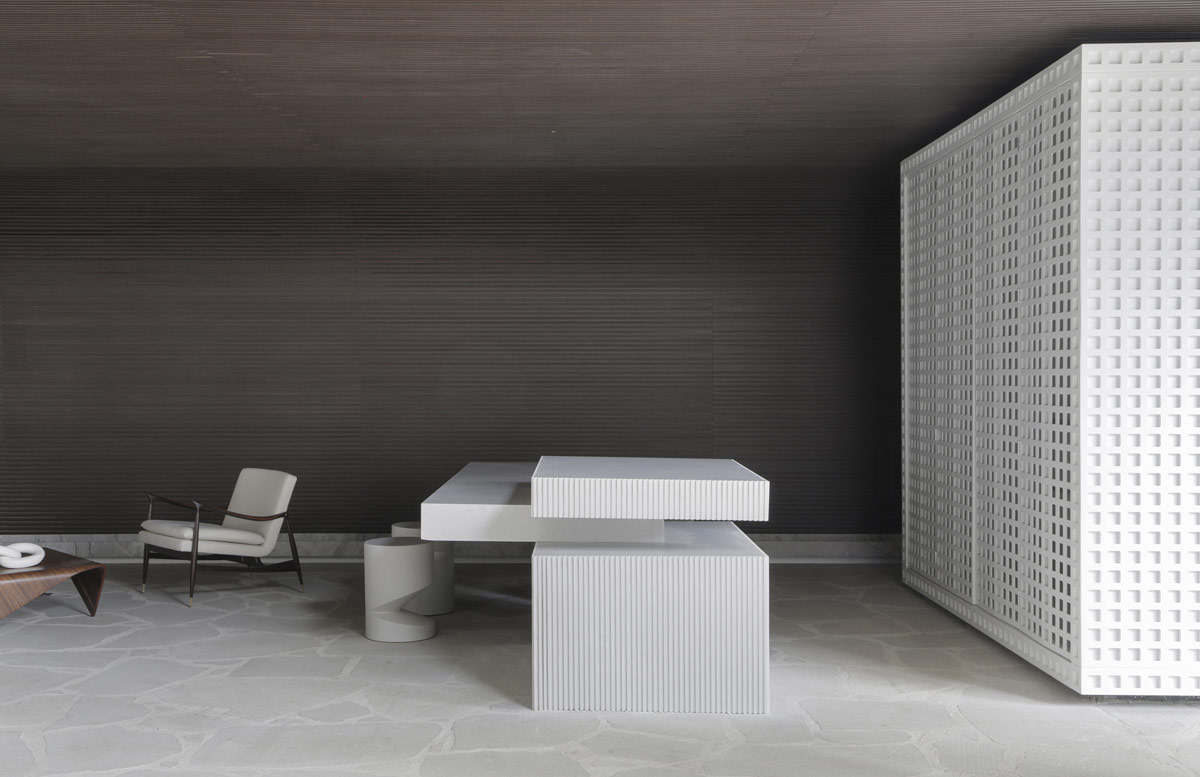 A gourmet Island splits to grip a dining bar on one side. 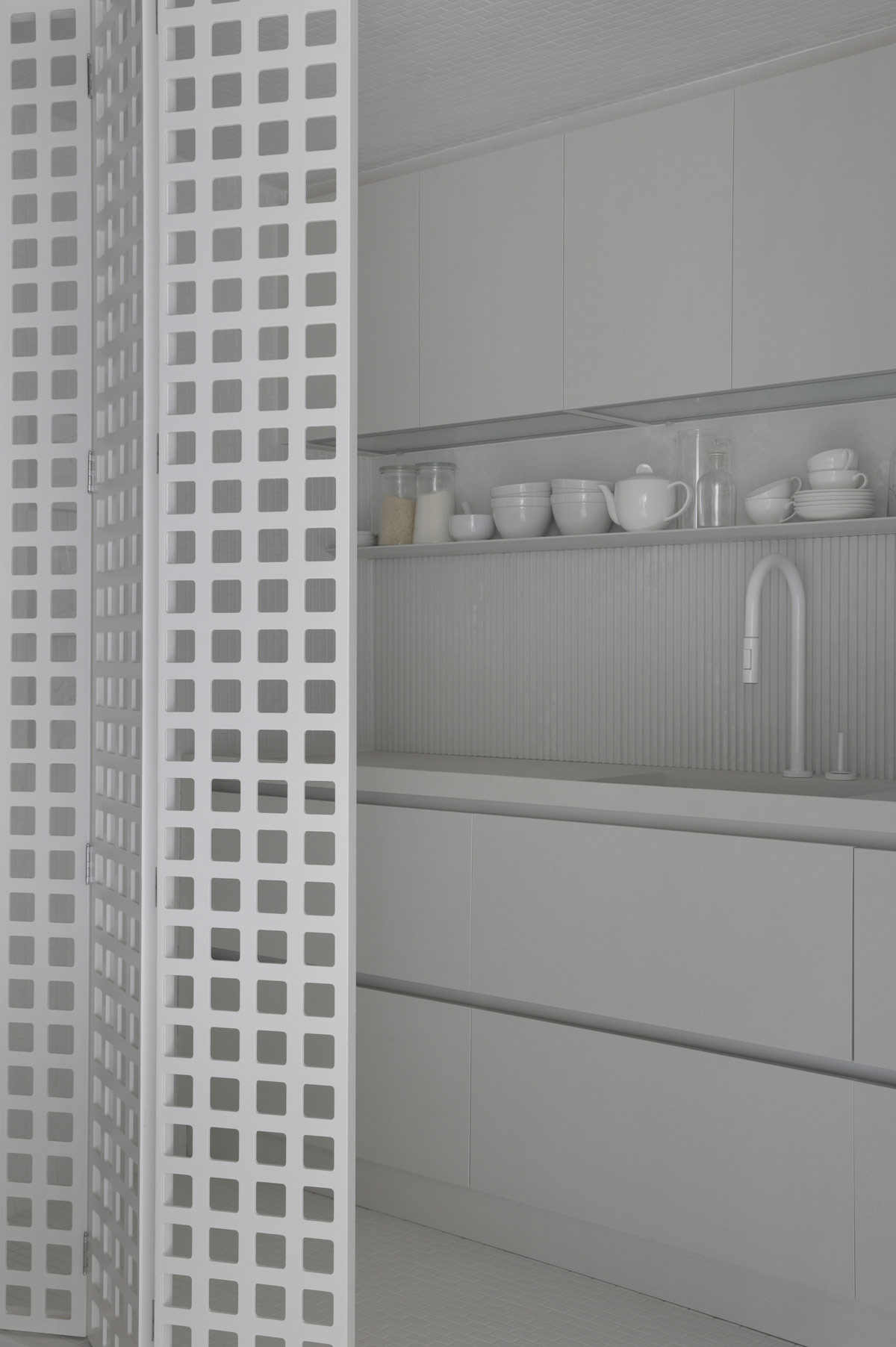 The kitchen is concealed in a central box with screen doors. 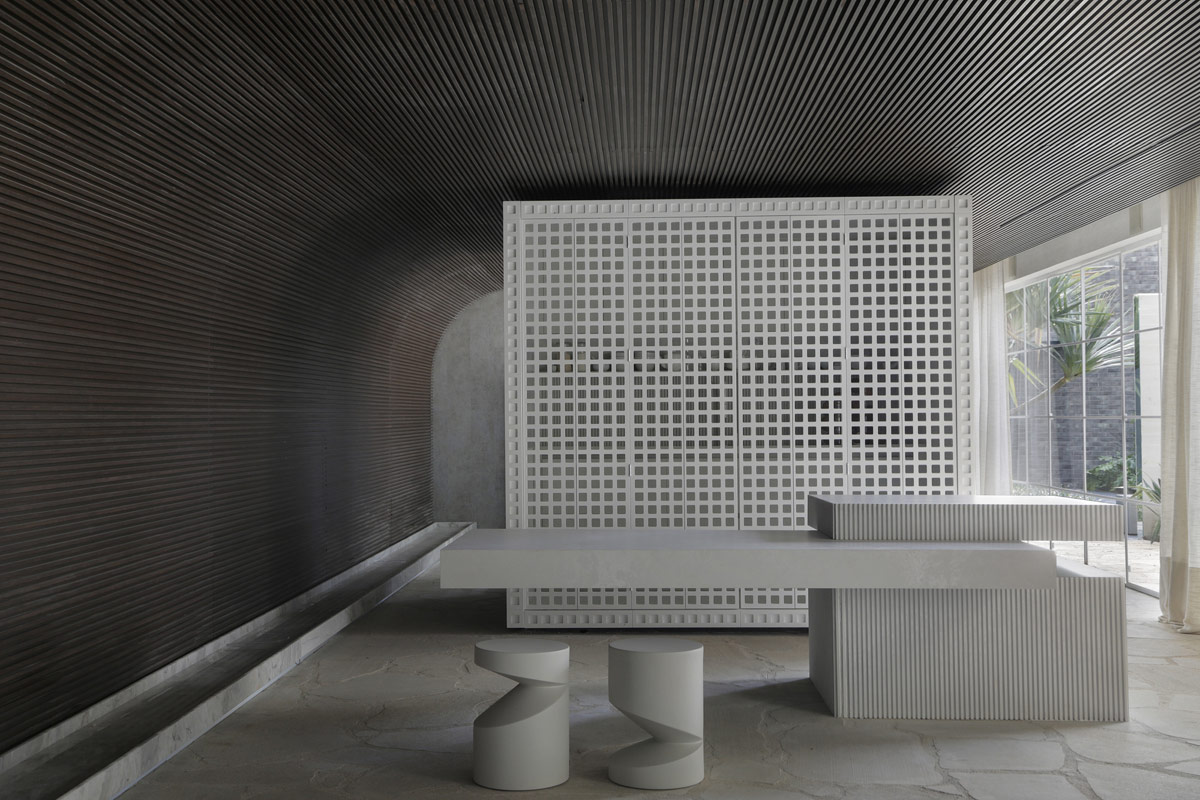 All white kitchen cabinets all but disappear within the muxarabi screen box. When closed up the block becomes volumetric play with light and shadows. 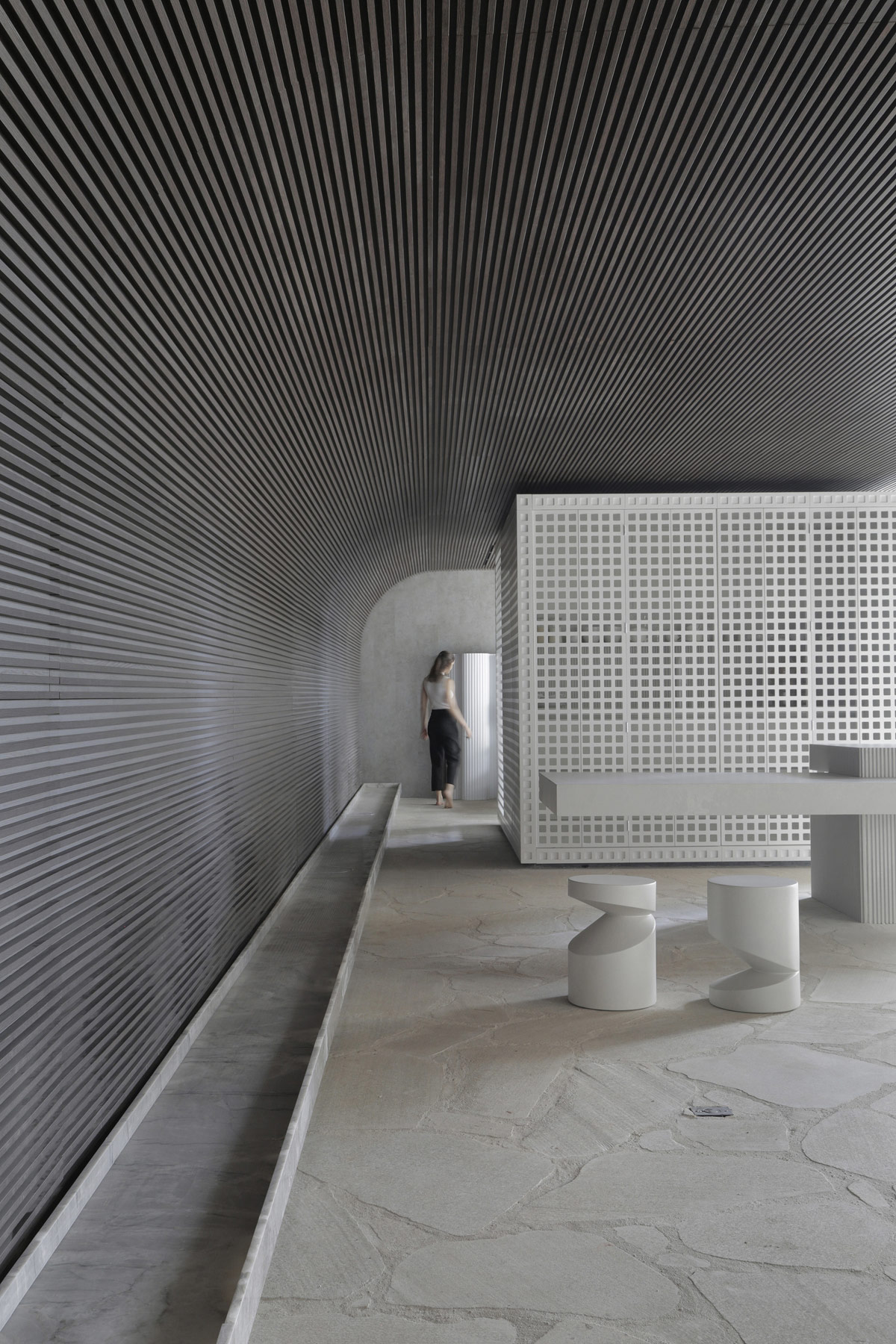 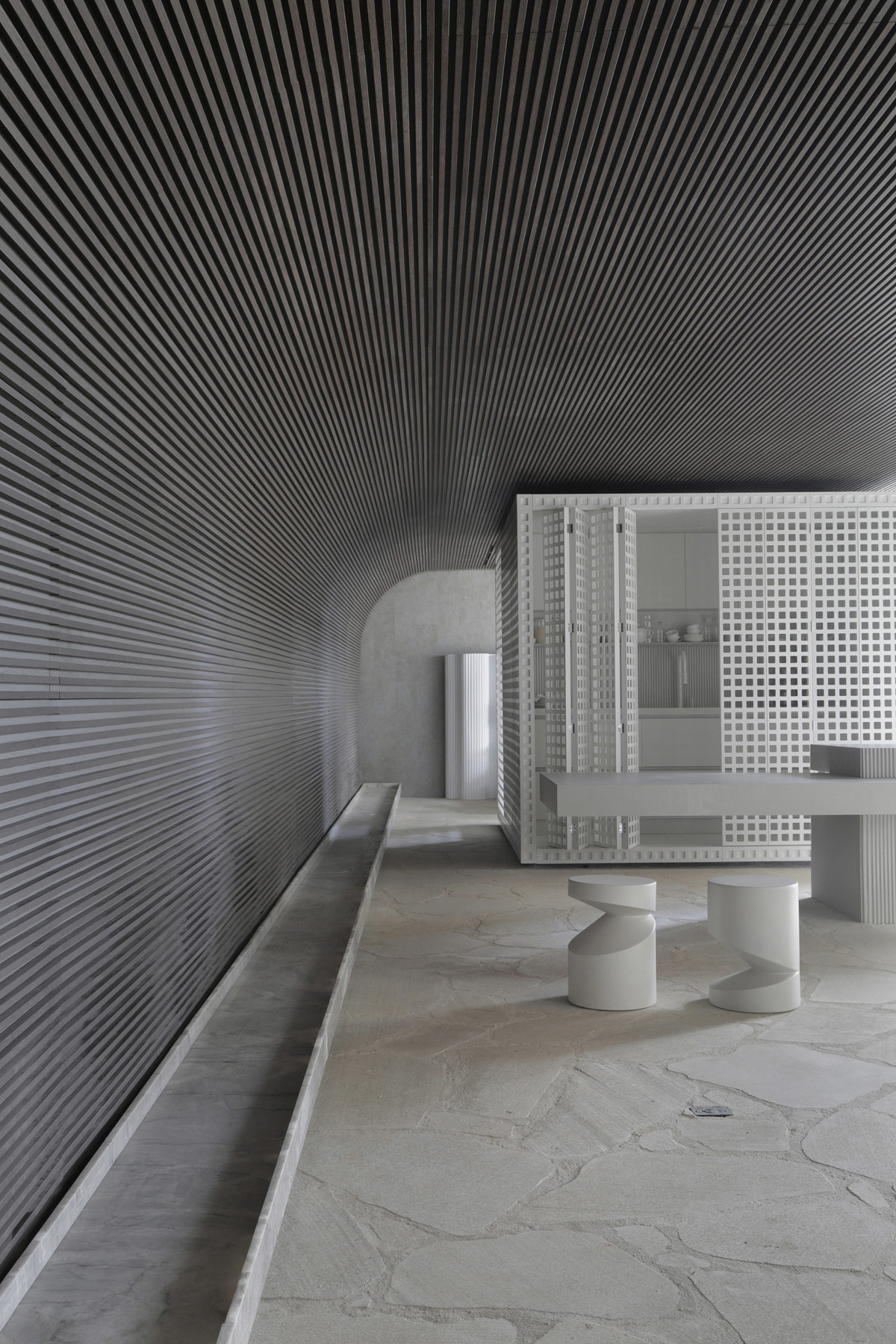 The interior leaves stereotypical Bahia colour behind, though exhibits a bond with the homeland in its very details. 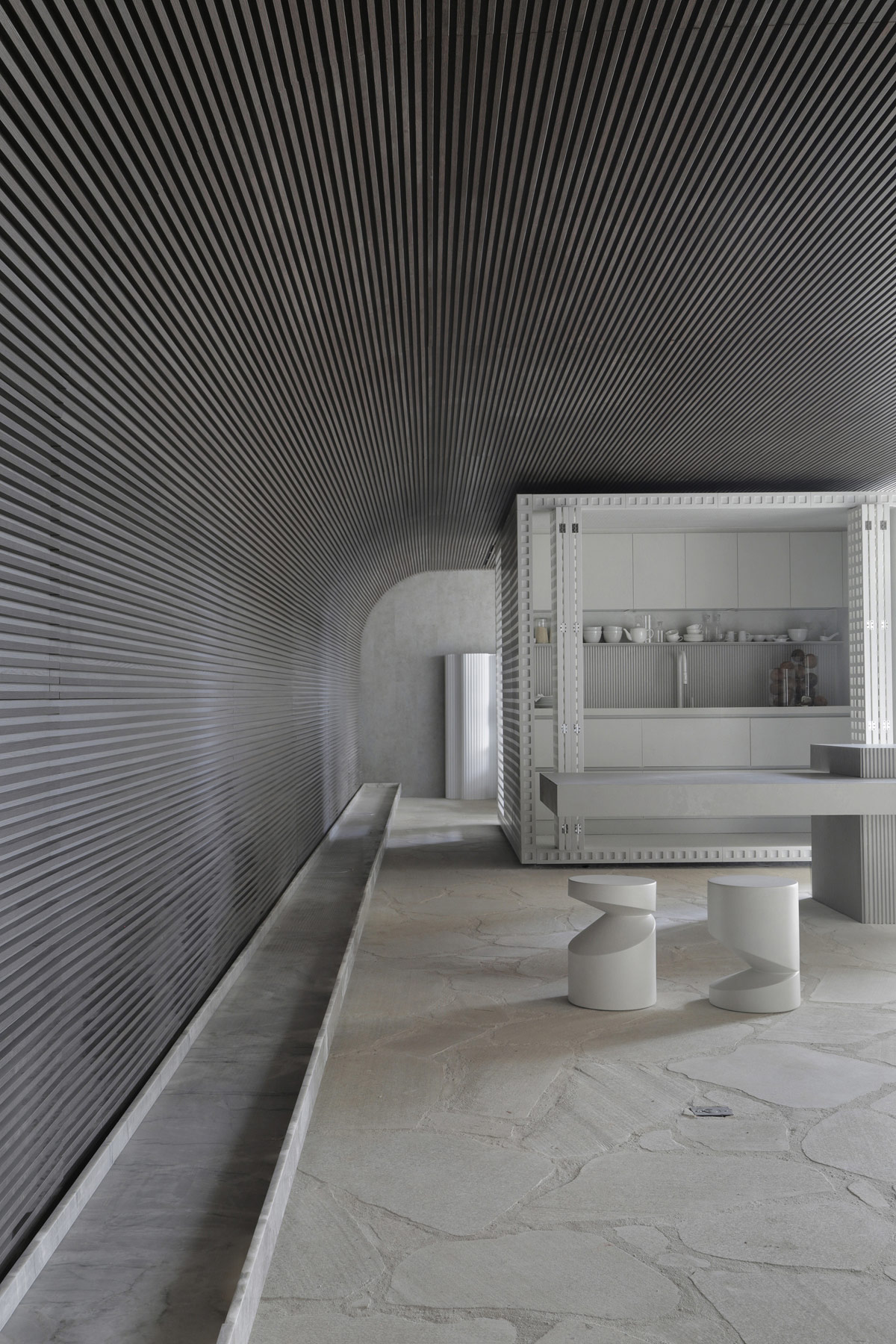 The arched architecture forms a grand entryway into the master suite. 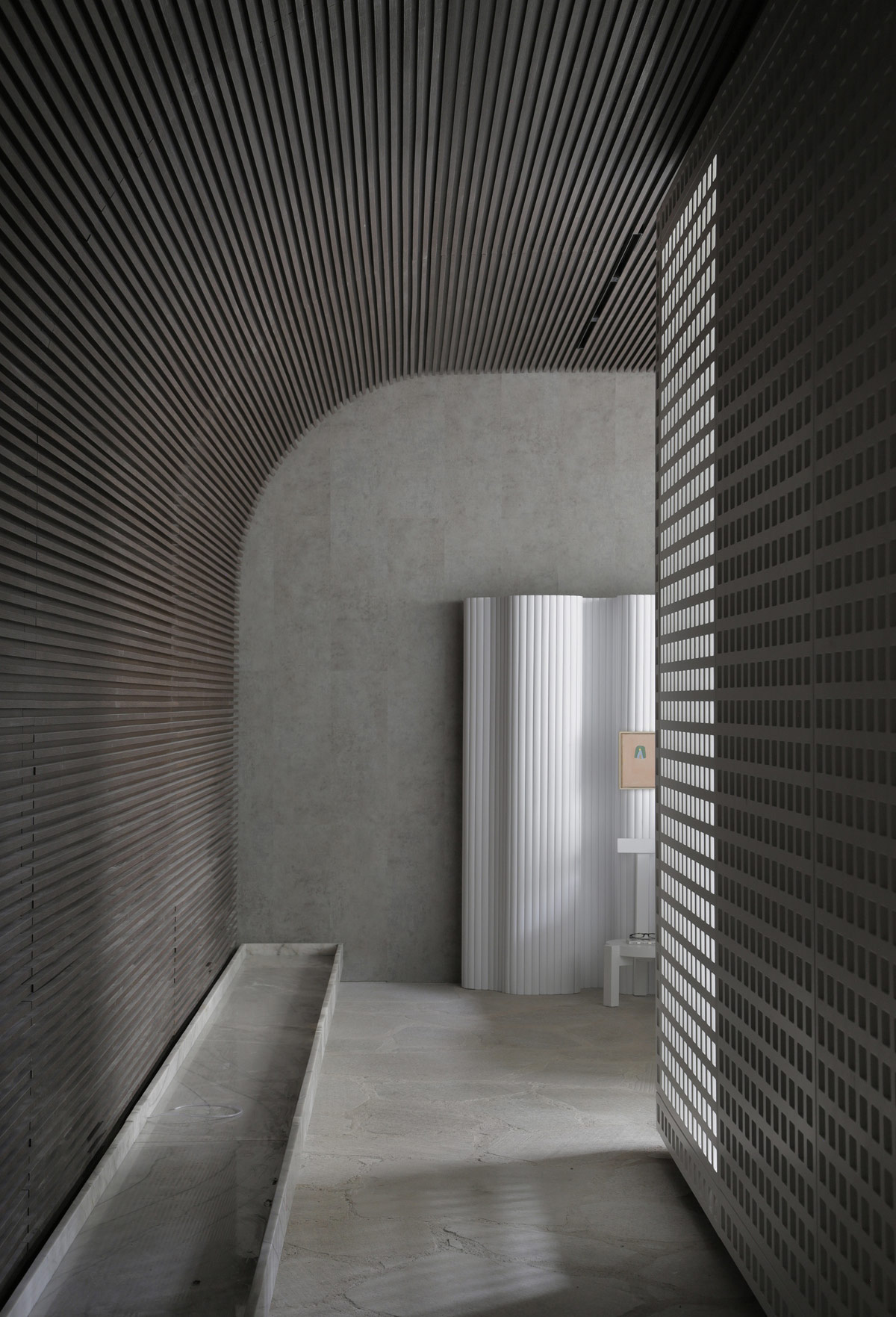 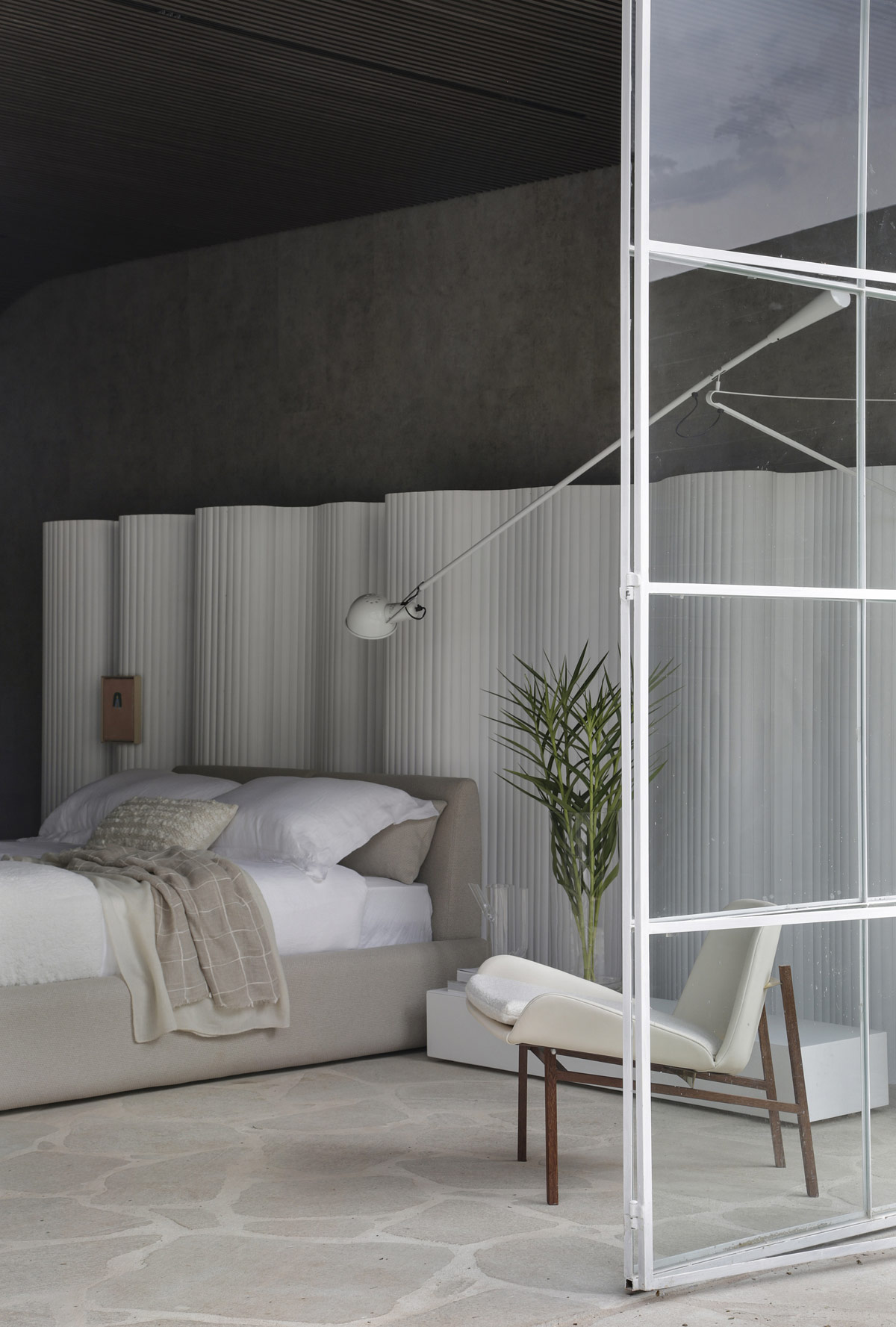 A unique white metal headboard undulates its way across the width of the bedroom, creating rolls of light and shade. One stylish bedroom chair rests by bifold patio doors. 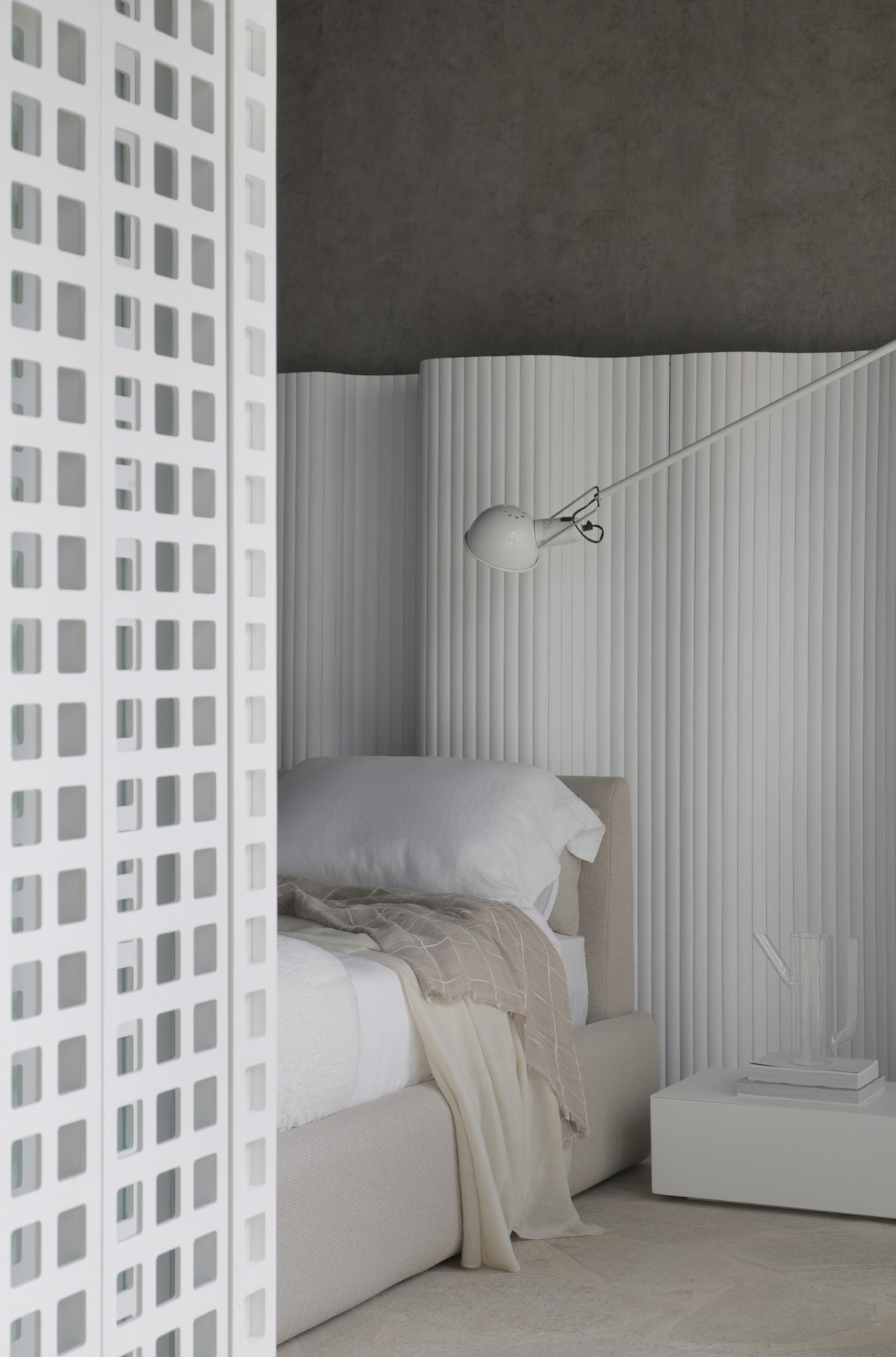 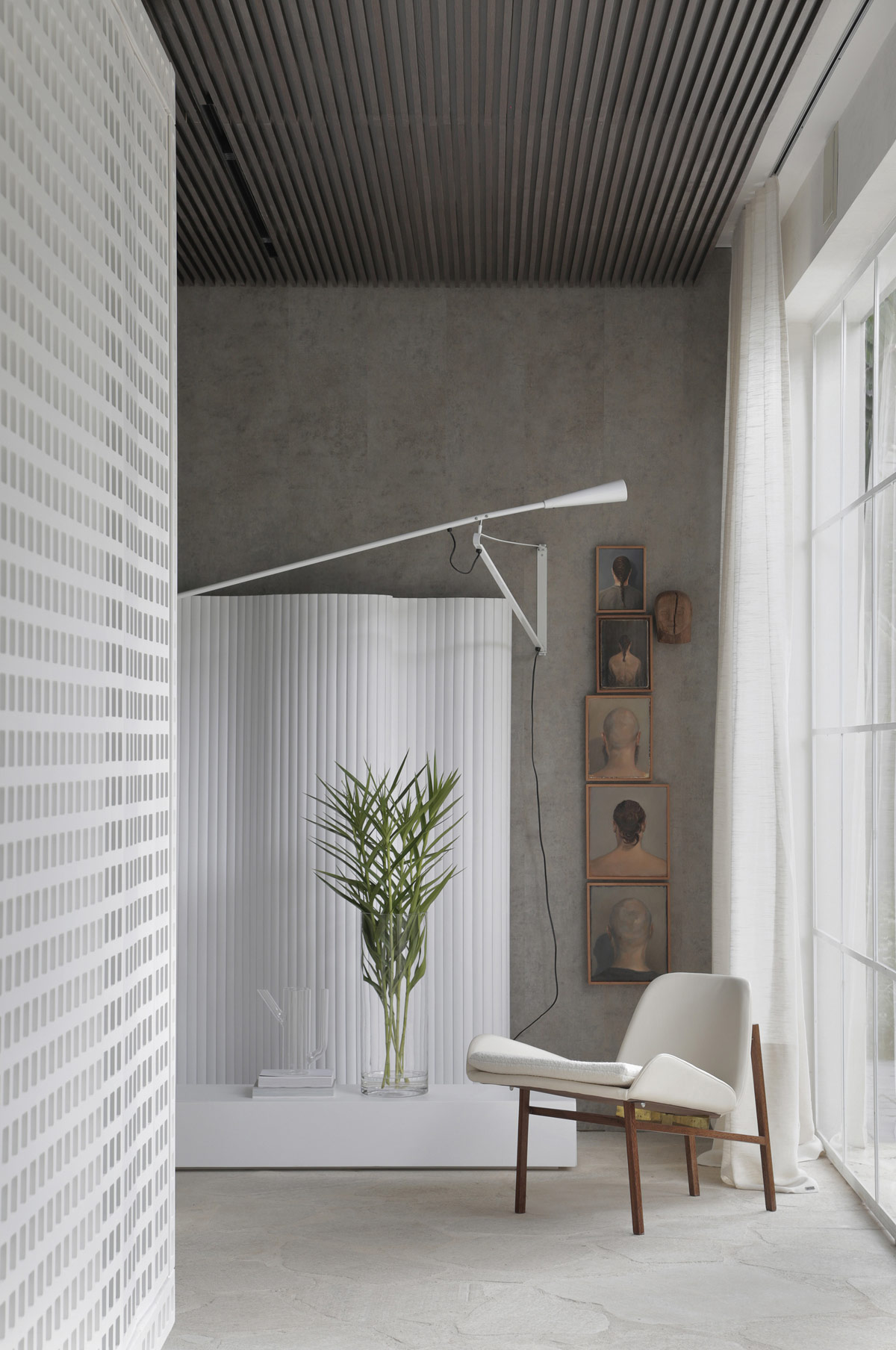 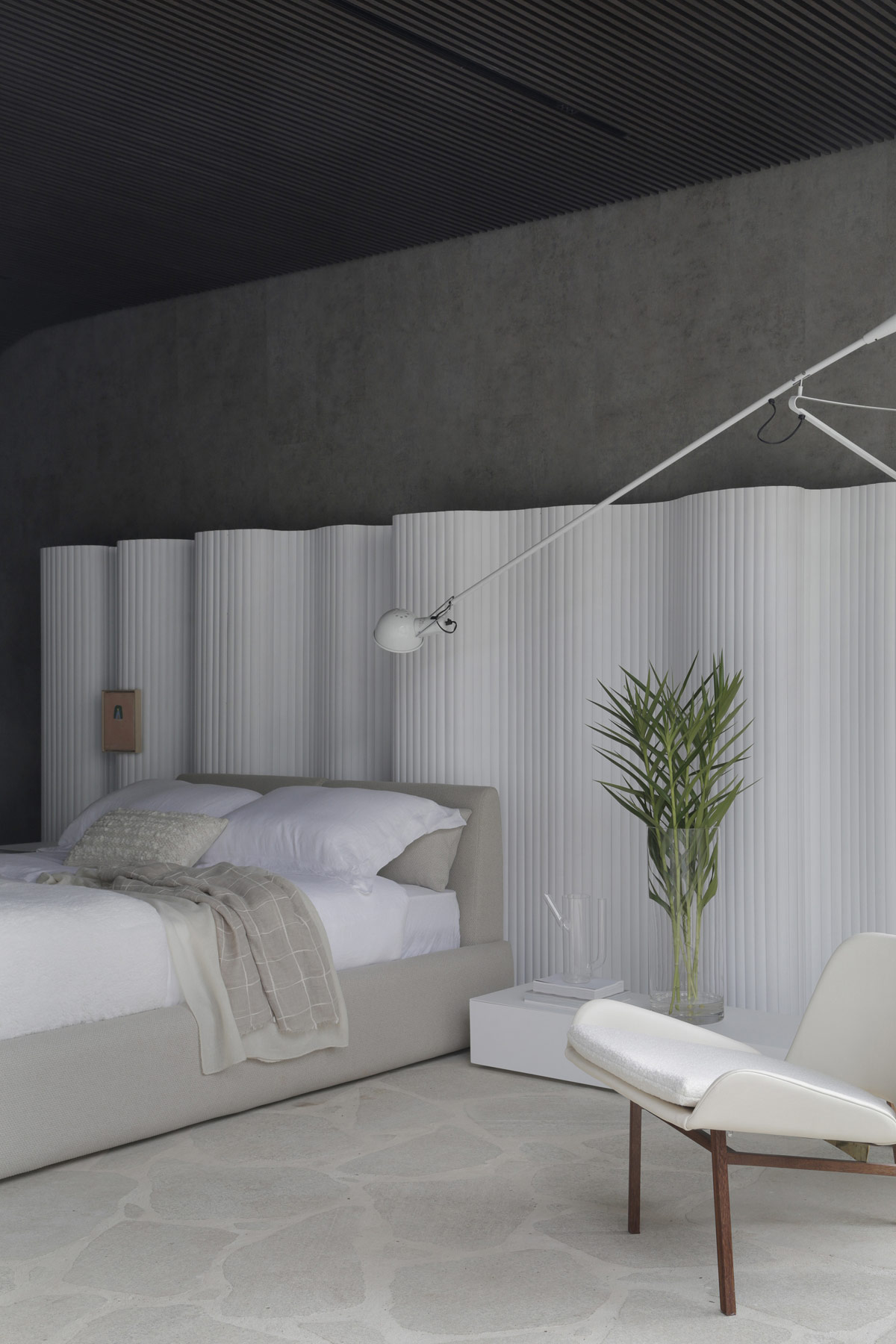 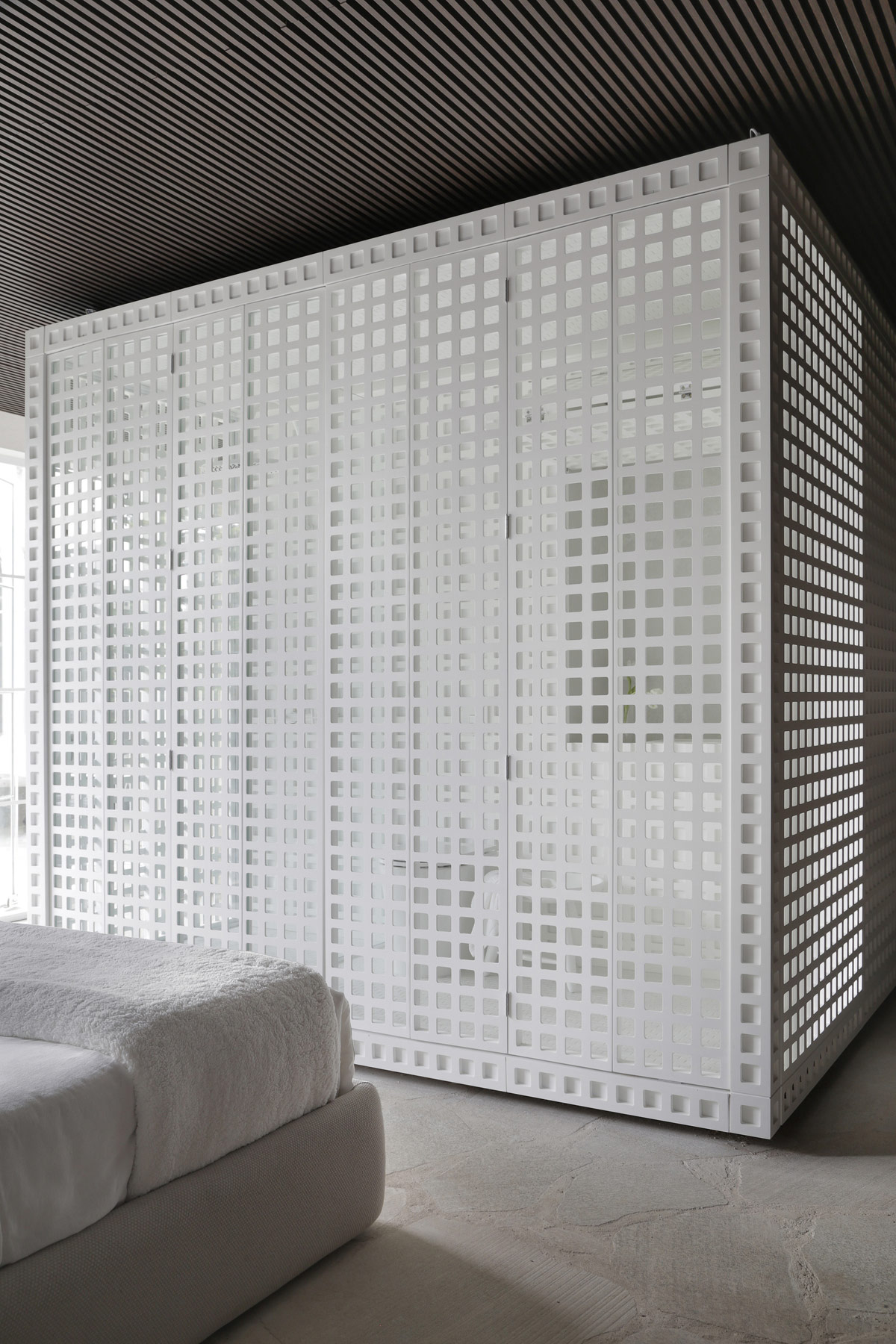 The central screen box that houses the kitchen is also home to the bathroom, on its opposite side. This microarchitectural element allows whole rooms to become invisible, just by closing doors. 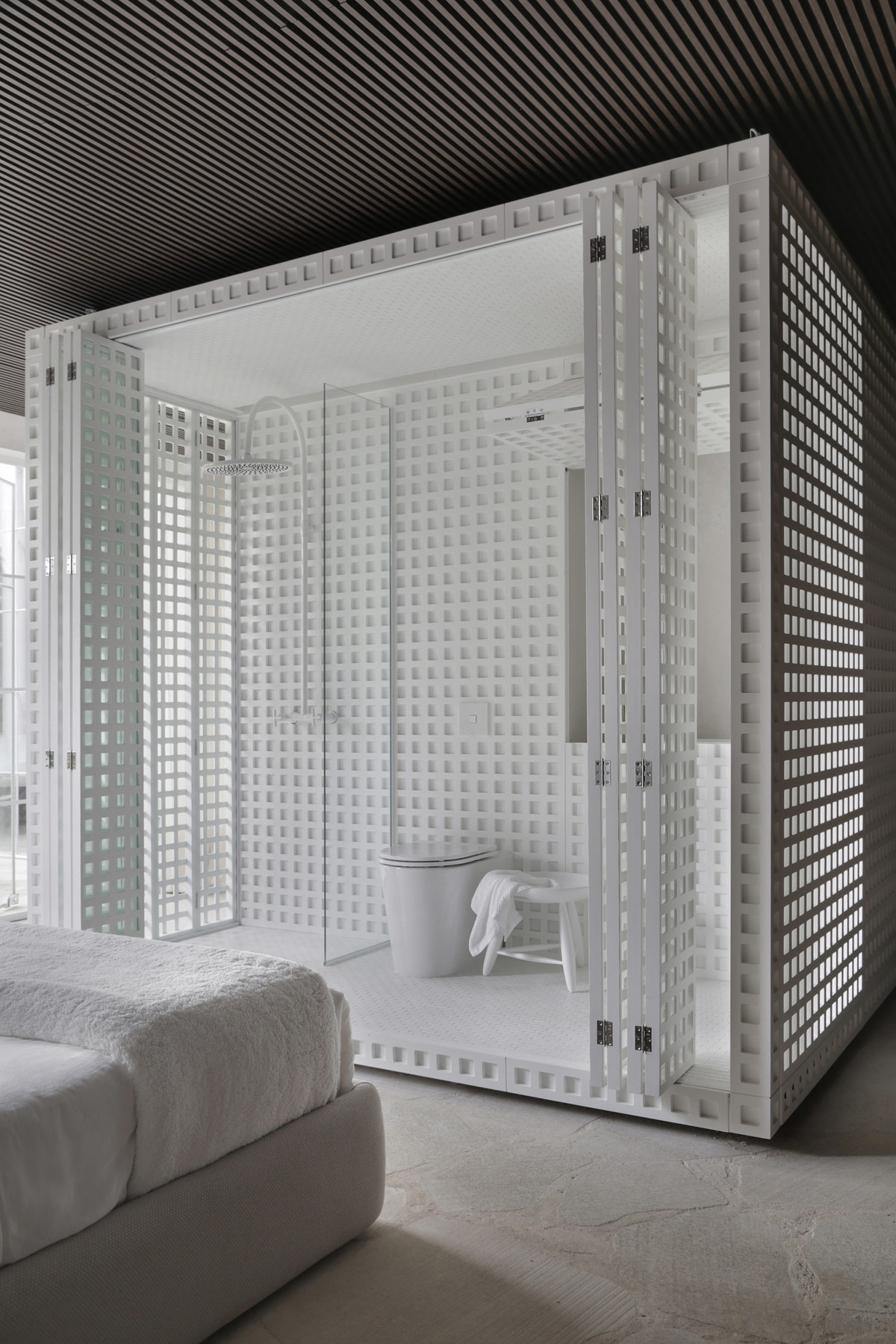 When opened up, the screened box offers a spacious and light shower room, complete with a modern toilet and vanity area that is revealed by yet another set of bifold screen doors. 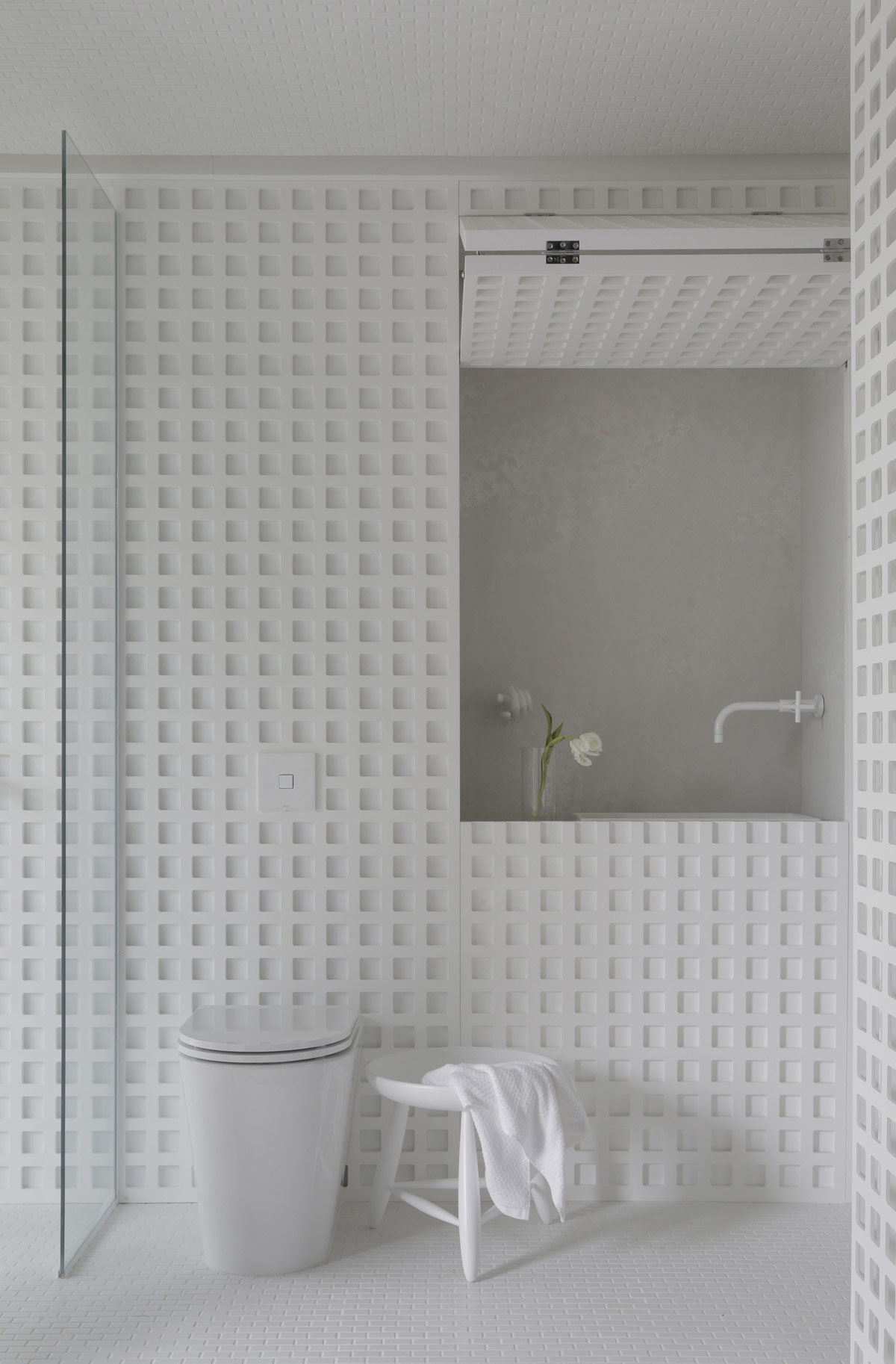 A minimalist white flush plate hides in amongst the crisscross white panelling. A small white stool becomes the landing spot for wet towels and discarded clothing. 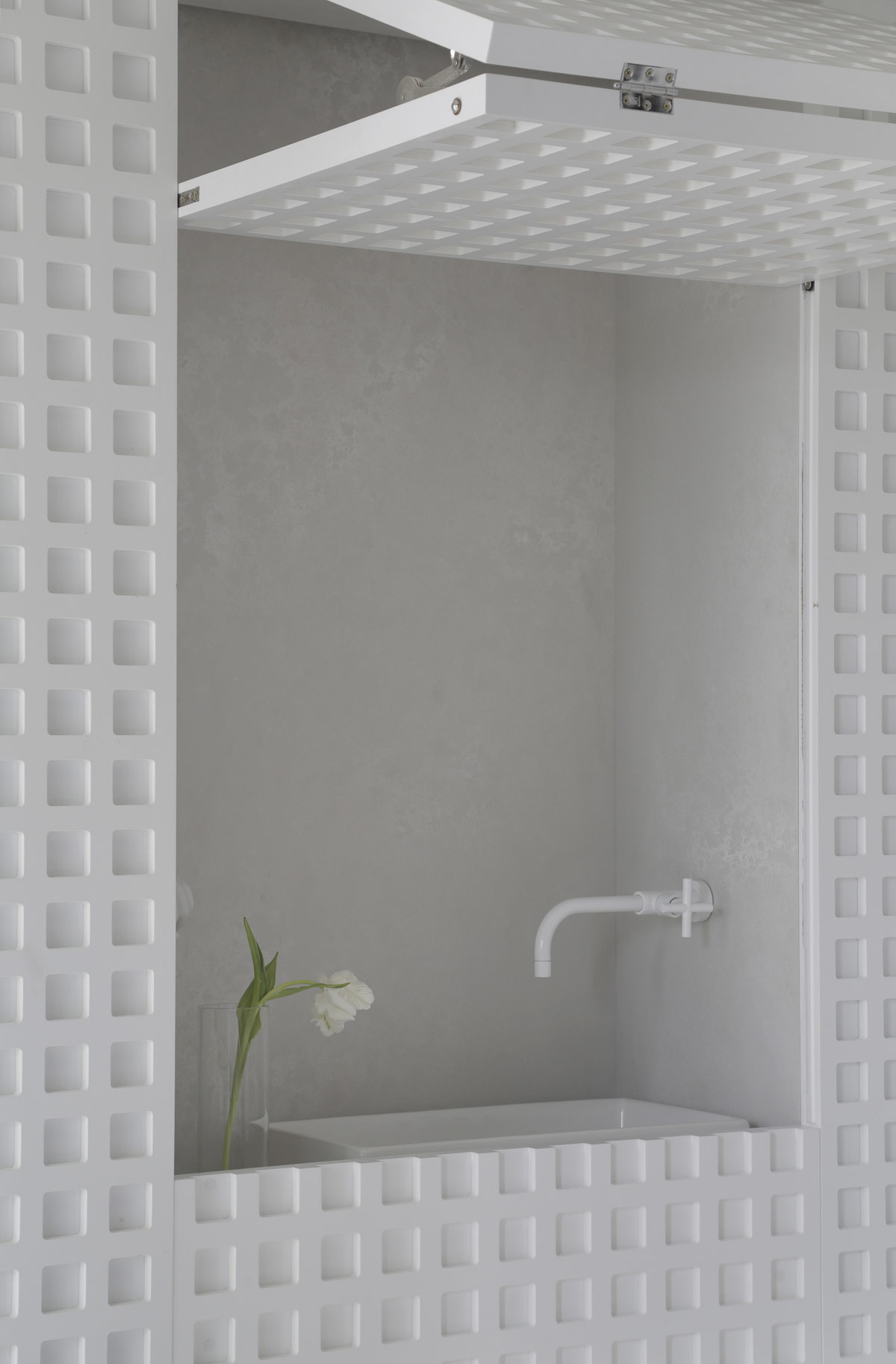 The vanity area is a simple cutaway nook, tucked beneath a lift up door. Raw concrete builds a backsplash behind the rectangular vessel basin, which is set on a dropped vanity shelf. 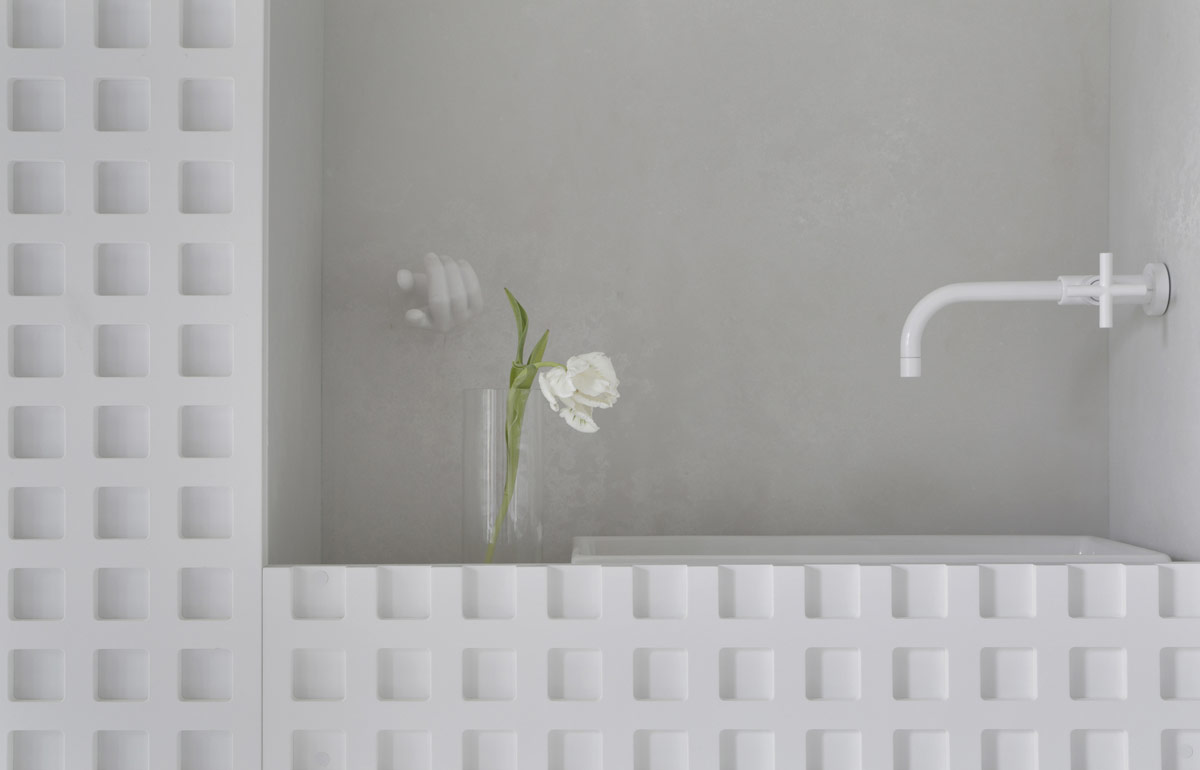 A single glass vase provides a little homey touch, and connection with nature. A modern white faucet extends from the side plane of the vanity nook in order to accommodate its shallow proportion. A beckoning hand sculpture offers up a place to hang a hand towel. 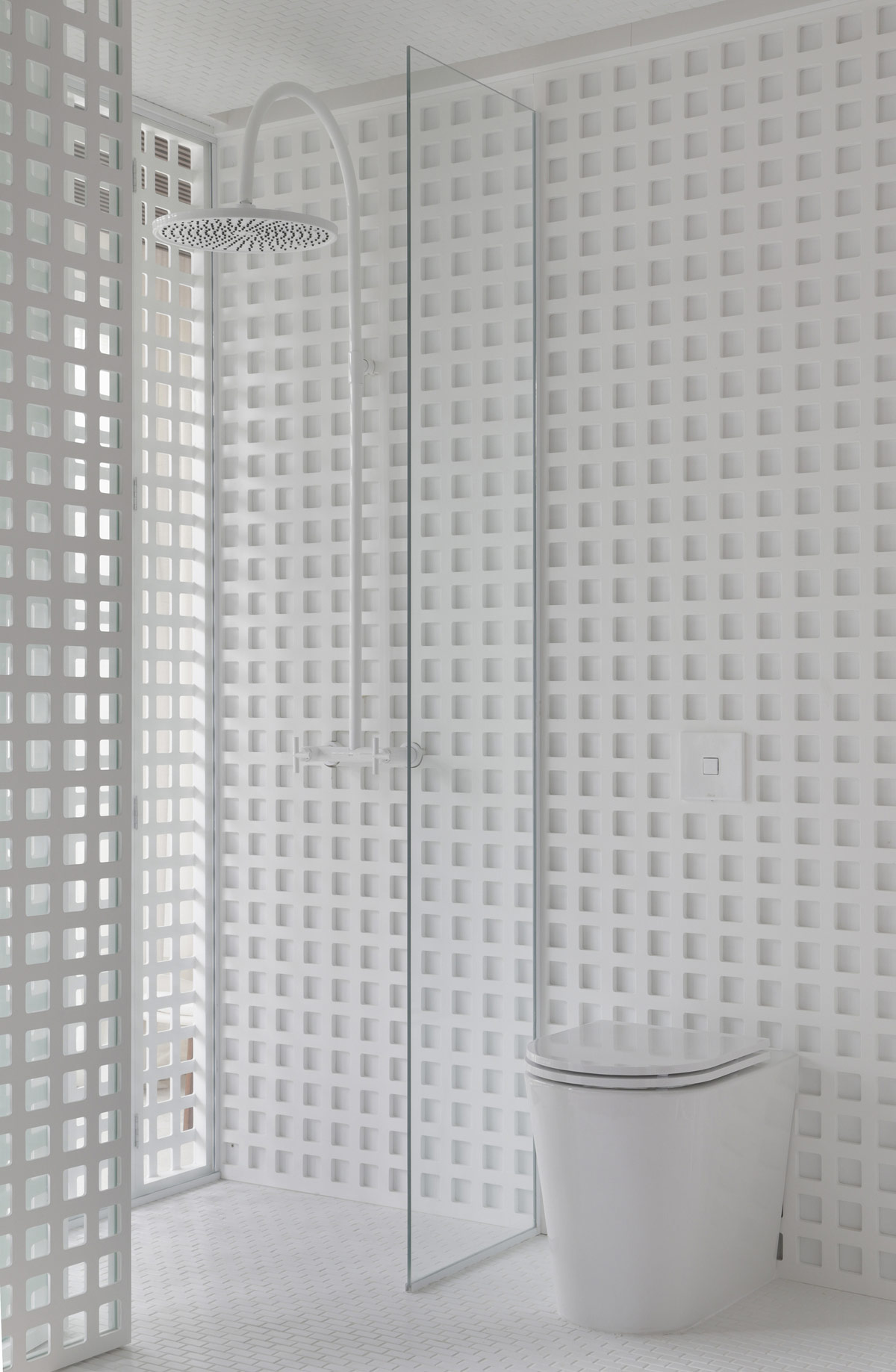 A narrow glass screen separates the shower from the toilet – more for aesthetics than actual protection from any splash zone. The screen walls let sunlight wash in. 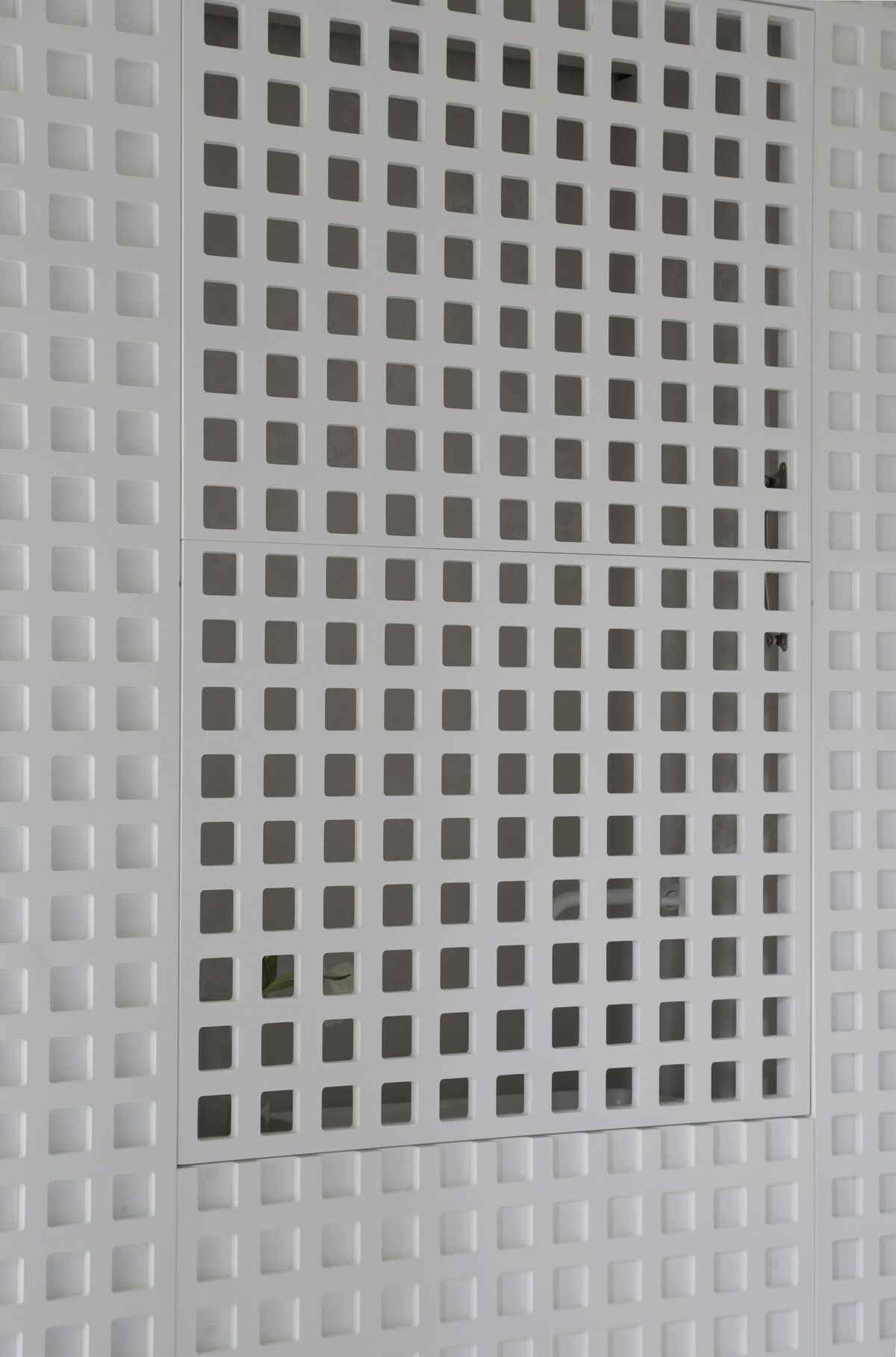 The door over the vanity unit maintains ventilation. 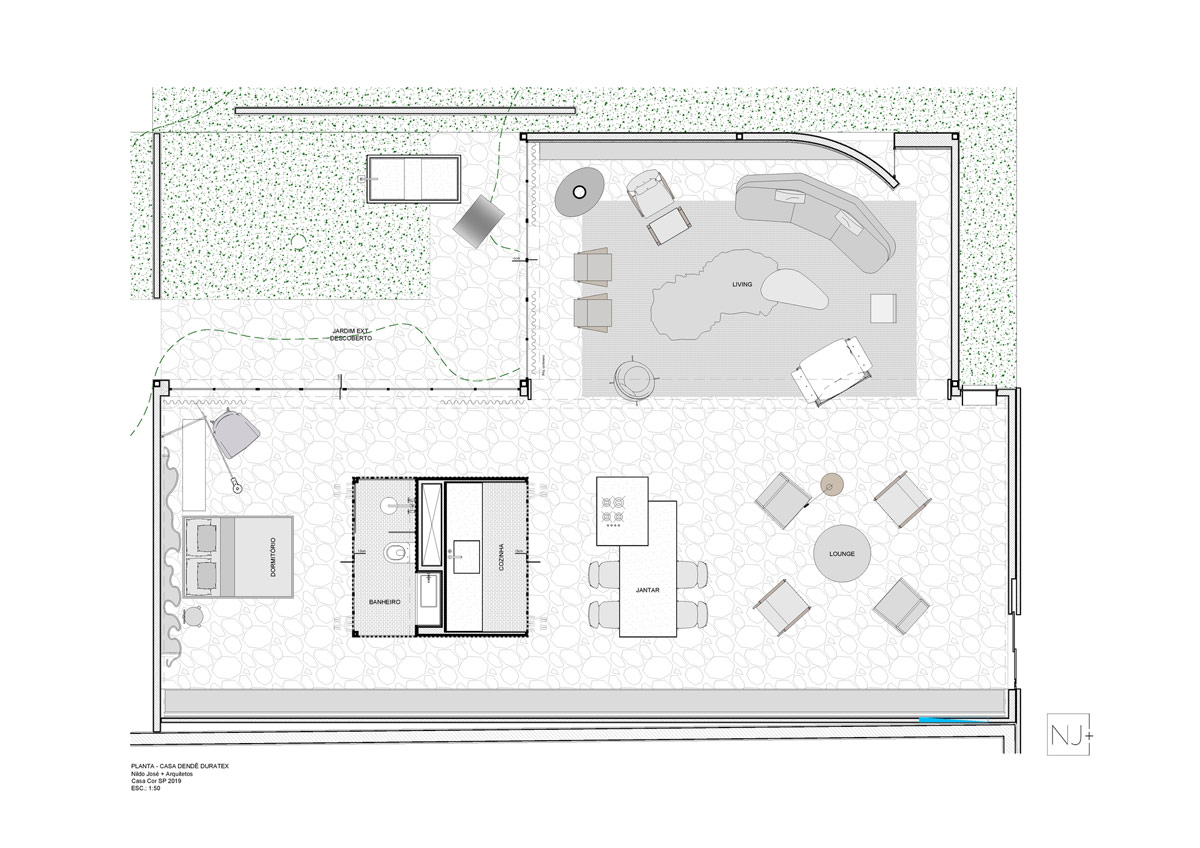 The floor plan illustrates how the central kitchen/bathroom volume provides privacy to the bedroom area from the main living spaces.

Uplifting Blue Interiors That Give That Blue Sky Mood

Wed Mar 25 , 2020
Like Architecture & Interior Design? Follow Us… We all love to have a breezy blue sky mood, so why not give yourself a boost by shaping the decor inside of your very own home to promote a positive outlook. Blue is the colour of fine weather, calm waters, and good […] 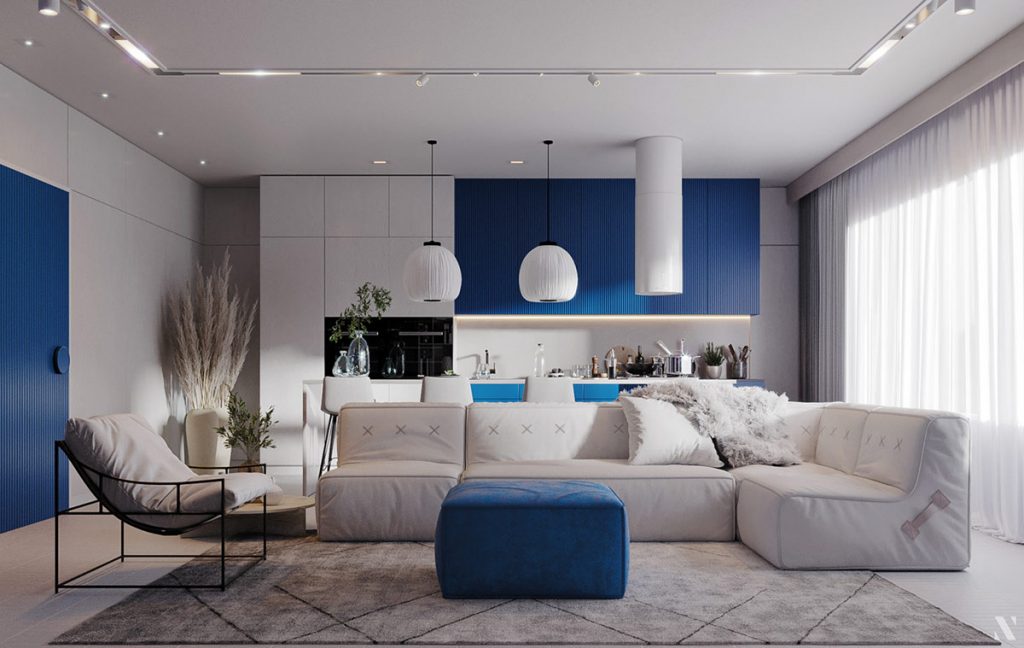