When Sean and Lisa Creamer purchased a 1914 farmhouse on a sublime stretch of Oak Creek near the Miles River on Maryland’s Eastern Shore, they hoped it would become a magnet for family and friends. And it has. A recent remake of the house, grounds and an outbuilding has only enhanced the place’s powerful allure. “It’s absolutely beautiful here,” says Lisa, a community volunteer. “We try to share it as much as we can.”

The Olney, Maryland, couple swooped up the Dutch Colonial abode and five-acre property in Royal Oak, a stone’s throw from St. Michaels, in 2006. For years, they spent weekends and summers there—boating, crabbing and fishing with their three children and guests. Now that the kids are in their 20s, the one-time retreat is transitioning to a full-time residence for the two (Sean, a financial executive, continues to commute to work) and a long-anticipated renovation was in order.

Changes by previous owners had saddled the faded farmhouse with a confusing layout and circa-1970s detractions. The Creamers sought to retain—or revive—old-soul charm while improving function and flow. They enlisted architect Gregory Wiedemann to update the home’s infrastructure, resuscitate its exterior and interior, replace an awkward addition, and convert the barn-turned-garage into a pool house.

“The Creamers wanted a family compound where they could gather,” explains Wiedemann. “The challenge was striking a balance, keeping as much of the historic fabric as we could yet dealing with the irregularities. We wanted to undo things that were not consistent with the original house and restore its character.”

Tucked into the interior, the kitchen once constituted, “a really strange conglomeration of spaces that snaked around,” as Lisa describes it. The architects relocated the kitchen to the former breakfast area and expanded it by enclosing a portion of the porch. The revamped kitchen now sits opposite the dining room and to the left of the approach-side entrance. Nostalgic elements—such as the island’s walnut top, reminiscent of a farm table—lend period-appropriate appeal.

A flat-roof, one-story appendage that housed the master-bedroom suite also demanded attention. The goal, says Wiedemann, “was to replace the box with a more sympathetic addition that works with the home’s historic character.” Bound by 100-foot-buffer restrictions on the waterfront site, the team retained the ground-level footprint but added a second story onto the new addition. A curved staircase connects the first-floor master suite and second-floor sitting room and also provides secondary access to the four main-volume bedrooms. Through its compatible massing, gabled roof and exterior materials, the 847-square-foot wing blends harmoniously.

The site informed the plan for transitional spaces. The architects restored the waterfront-facing covered porch and removed unsightly open decking to extend it, screening in the side facing the pool. As Wiedemann notes, “The wraparound porch addresses the two major orientations of water and the southern outdoor-gathering area.”

That zone comprises a reimagined pool/hot tub and outbuilding. The original barn, converted to a garage at some point, was in disrepair; the team transformed it into a high-functioning pool house designed for year-round use. Its first floor contains a hangout space, wet bar, changing area and bathroom; the second-floor game room leads out to a deck with panoramic views. The pool house serves as the daytime social hub and also attracts noisy night owls after dark.

Restrained landscaping reflects the home’s humble roots. McHale Landscape Design repurposed existing plants and selected others, such as boxwood, “representative of the time period of the house,” says principal Steve McHale. “We created a simple design that would complement the architecture and keep the views open. It was very intentional not to overdo the landscape.”

The interiors bow to the setting too. Designer Carol Wheeler of Bountiful Interiors instilled what she calls a “Tidewater coastal feel,” employing a neutral palette and taking a pared-down approach. “You always want to play up the view,” she advises. “Big window treatments would have blocked the scenery outside.”

Wheeler specified “come-sit-here” furnishings, covered in performance fabrics. “The selections had to be functional,” she says. “This house is meant to be used, not just to look pretty.”

Indeed, the Creamers entertain often—and sometimes in a big way. Every year, they gather 100 guests for their Turkey Bowl, a touch-football game on the Saturday after Thanksgiving. “It’s gone way overboard,” laughs the wife. “Sean built goalposts out of PVC pipes. He’s out there weeks ahead of time getting ready.”

Other weekends, the couple welcomes 20 family members, or their adult children invite friends to stay. “We’re practically running a B&B,” quips Lisa. “Everyone has to sign up early because weekends go quickly here.”

3 Examples That Show How To Go Full Mid Century Modern

Mon Mar 2 , 2020
Like Architecture & Interior Design? Follow Us… The mid century modern style can be introduced to any room with a single piece of retro furniture or a specific fabric print, but sometimes it’s more fun to go the whole hog. These three home designs not only employ mid century modern […] 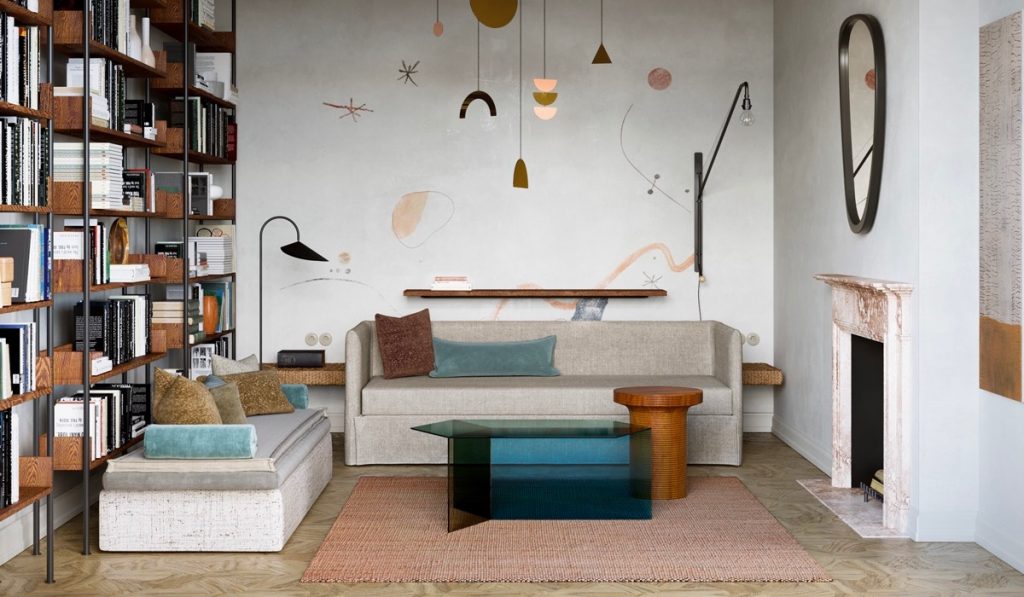