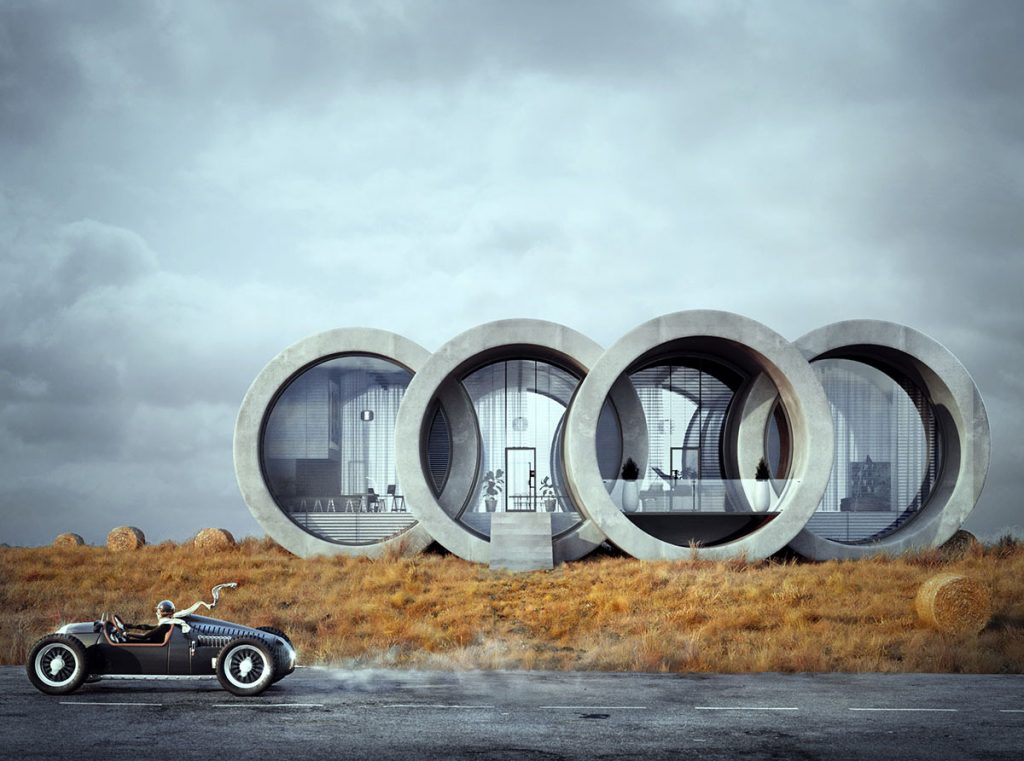 Famous logos have inspired the design of five spectacular private house designs, released by Polish architecture firm Wamhouse Studio. The conceptual series features the Audi Ringshouse, a triangular Adidas residence, a gravity defying Renault diamond house, an entirely water locked Chevrolet island retreat, and a Mitsubishi emblem structure isolated in the sand dunes. Each unique construction entices the onlooker to peer inside its glass walls, and so we’ll take an in depth tour through the round windows of The Ringshouse. Inside we’ll discover how those great curving concrete walls shape and challenge the interior decor. The complete floor plan is included at the end of the tour.

The Ringshouse design features a brutalist house exterior, shaped to directly reference the four interlocking rings of German car manufacturer Audi. Designed by the Principal of Wamhouse Studio, Karina Wiciak, the source of inspiration was not just a logo but also the combined history of the brand and of architecture. The car brand was created in the 1930s, a time that is almost gone from living memory. “The building also refers to architecture, modernism popular at that time. However, features typical of this style, such as raw concrete structures, rounded walls and windows, open internal space, large glazing – are reinterpreted here again,” says Wiciak. 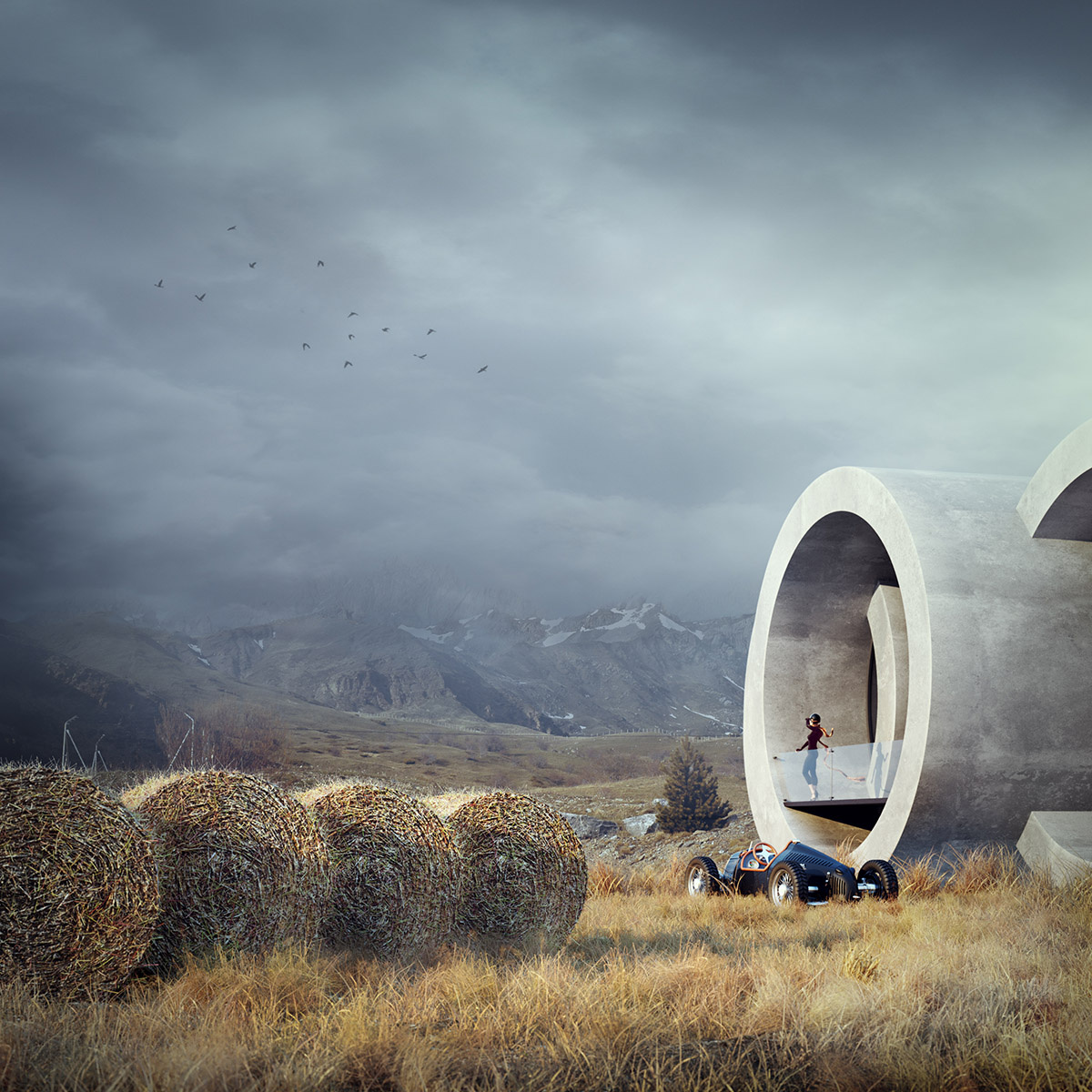 The Ringshouse structure consists of four parallel concrete cylinders, which hold a connected single story living space and all of the bedrooms. The main level floor area of the house is almost 280 square meters, however, there is also an underground garage with utility rooms. “The overall goal was to maintain the readability of four cylindrical bodies on the outside. Therefore, it is not a frugal home for a family, but rather a spacious holiday residence, situated among natural vegetation,” reflects the studio. 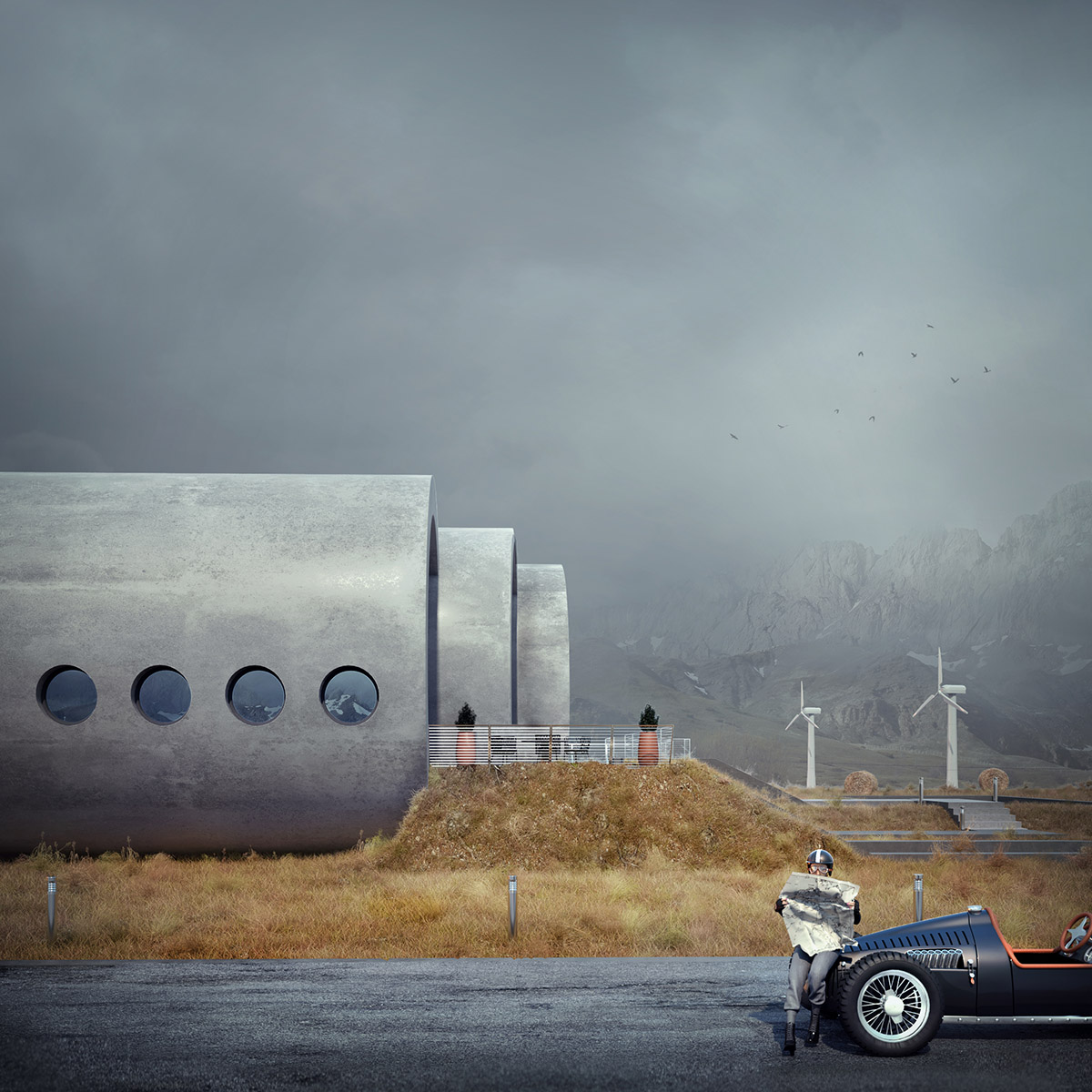 From the side, the massive grey cylinders lay like dissected aircraft. Porthole windows perforate the cold concrete facade. 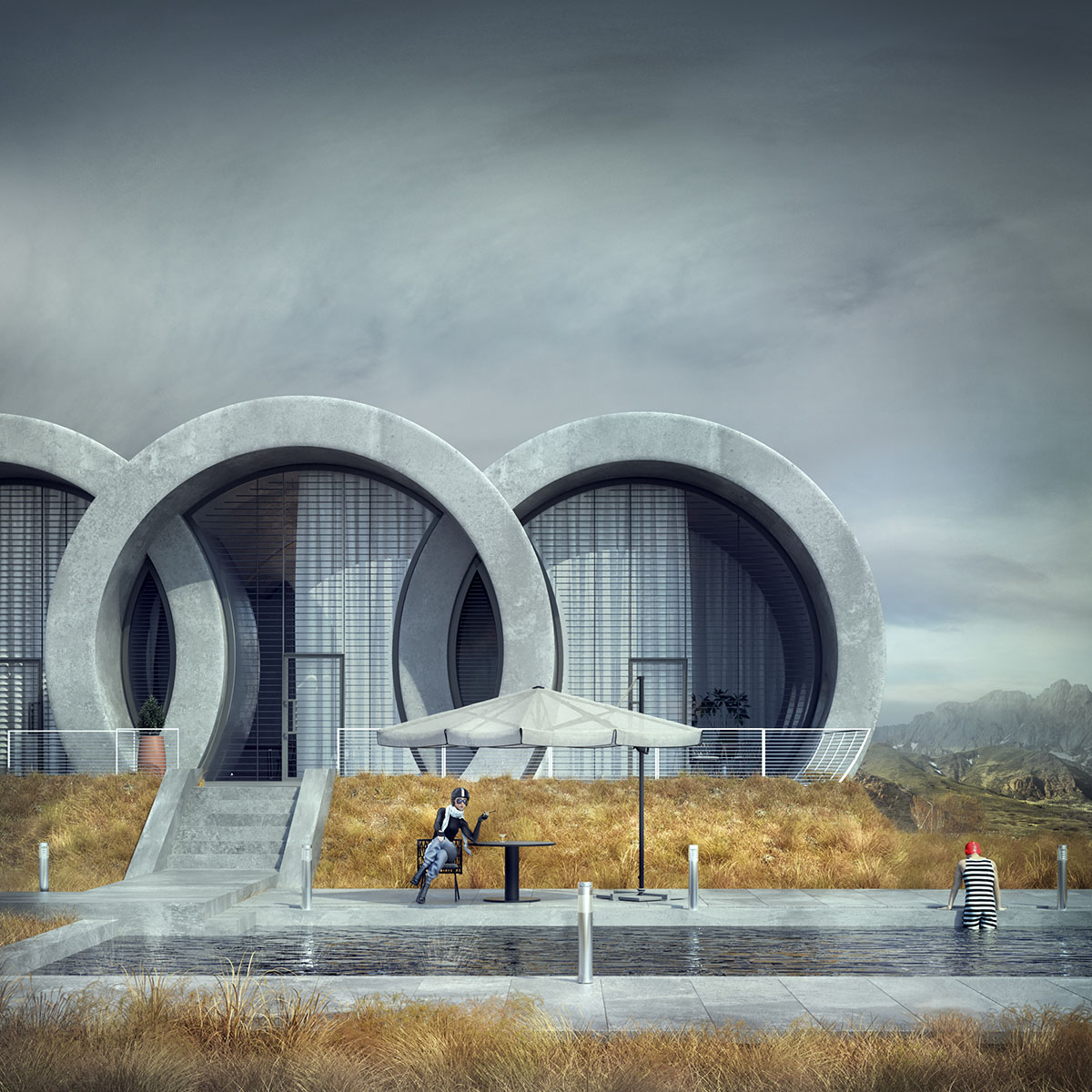 To the rear of the property, sundecks span the length of the build. Curving white metal balustrades at each end bend with the building’s commanding silhouette. 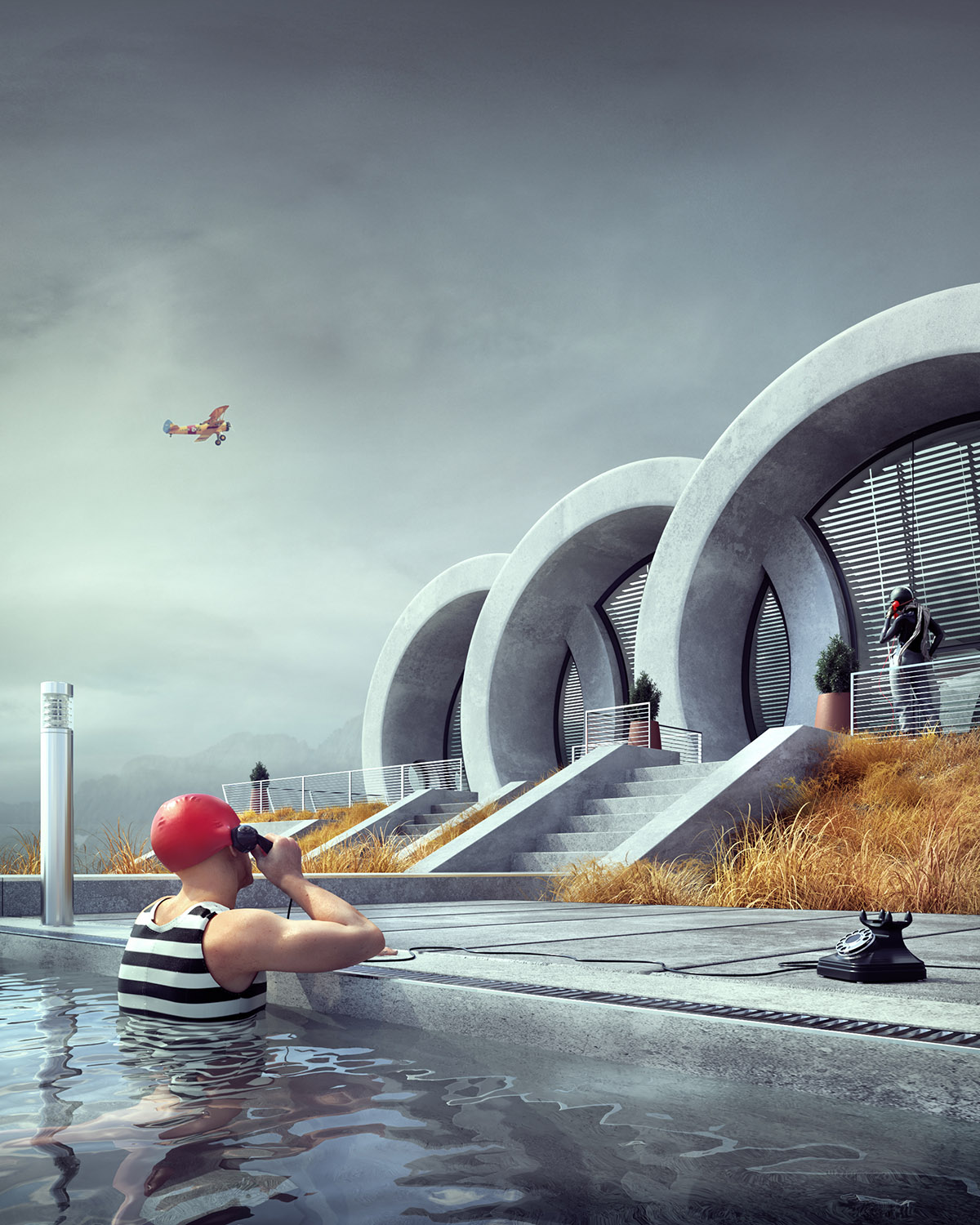 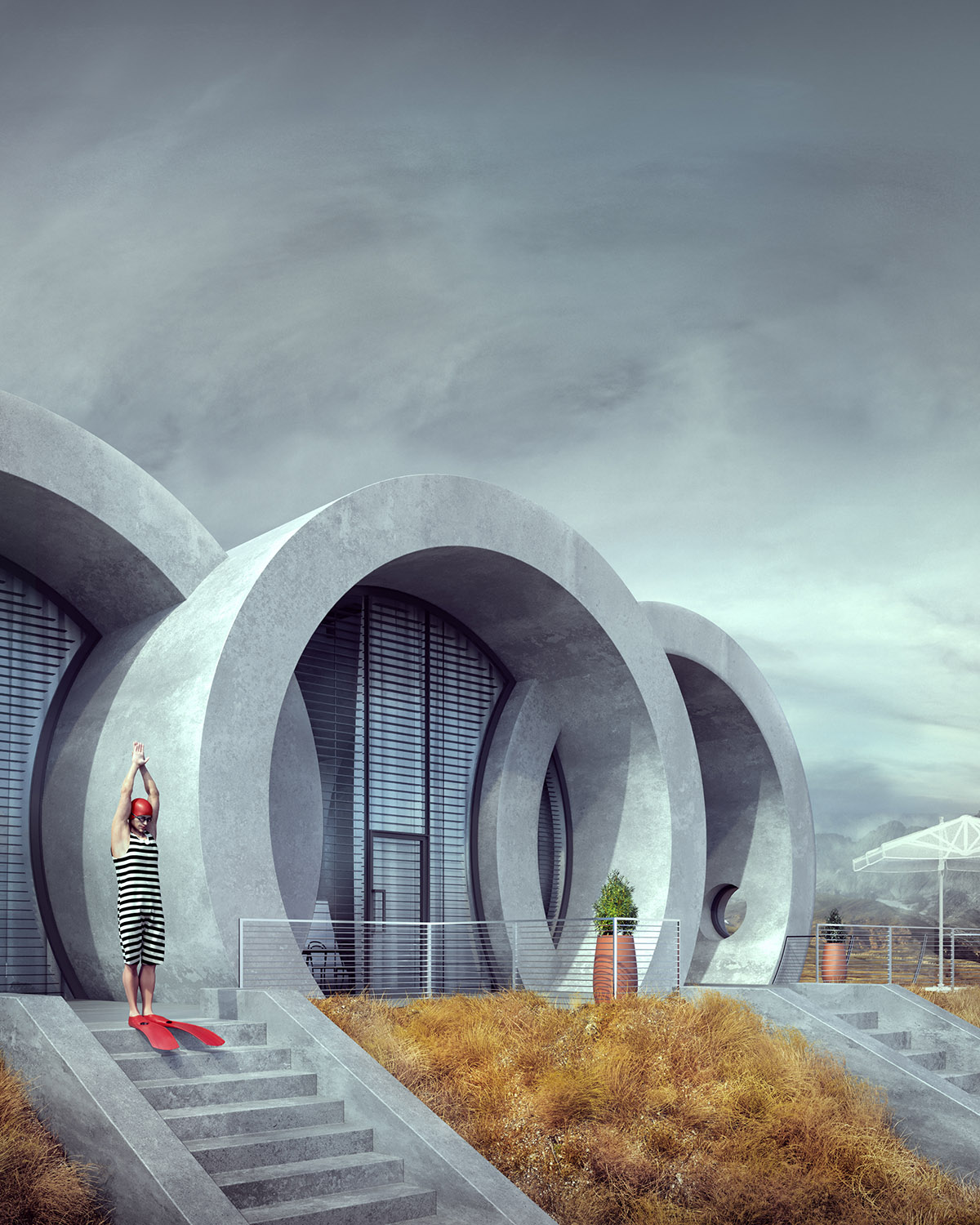 This concept is the fifth design in Warmhouse’s logo series. As with the previous houses, large windows factor to open up and exaggerate the form of the building, making the inspirational brand more readable. 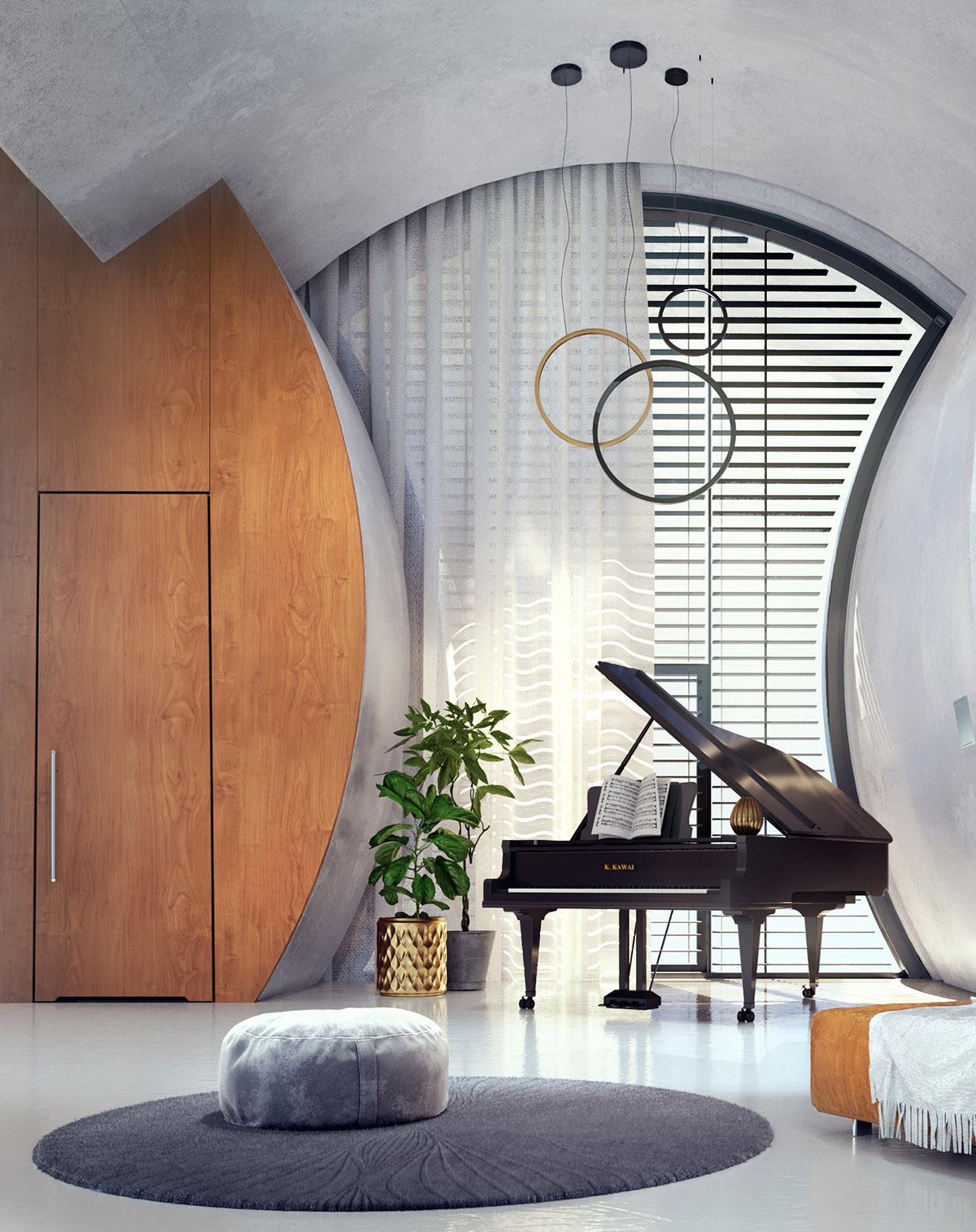 Upon entering the home there is a hallway that leads onto an open plan lounge and dining room, plus a music corner and two generously sized closets. A modern cognac coloured sofa, a small pouf and round rug rest by a grand piano to seat a music appreciative audience. 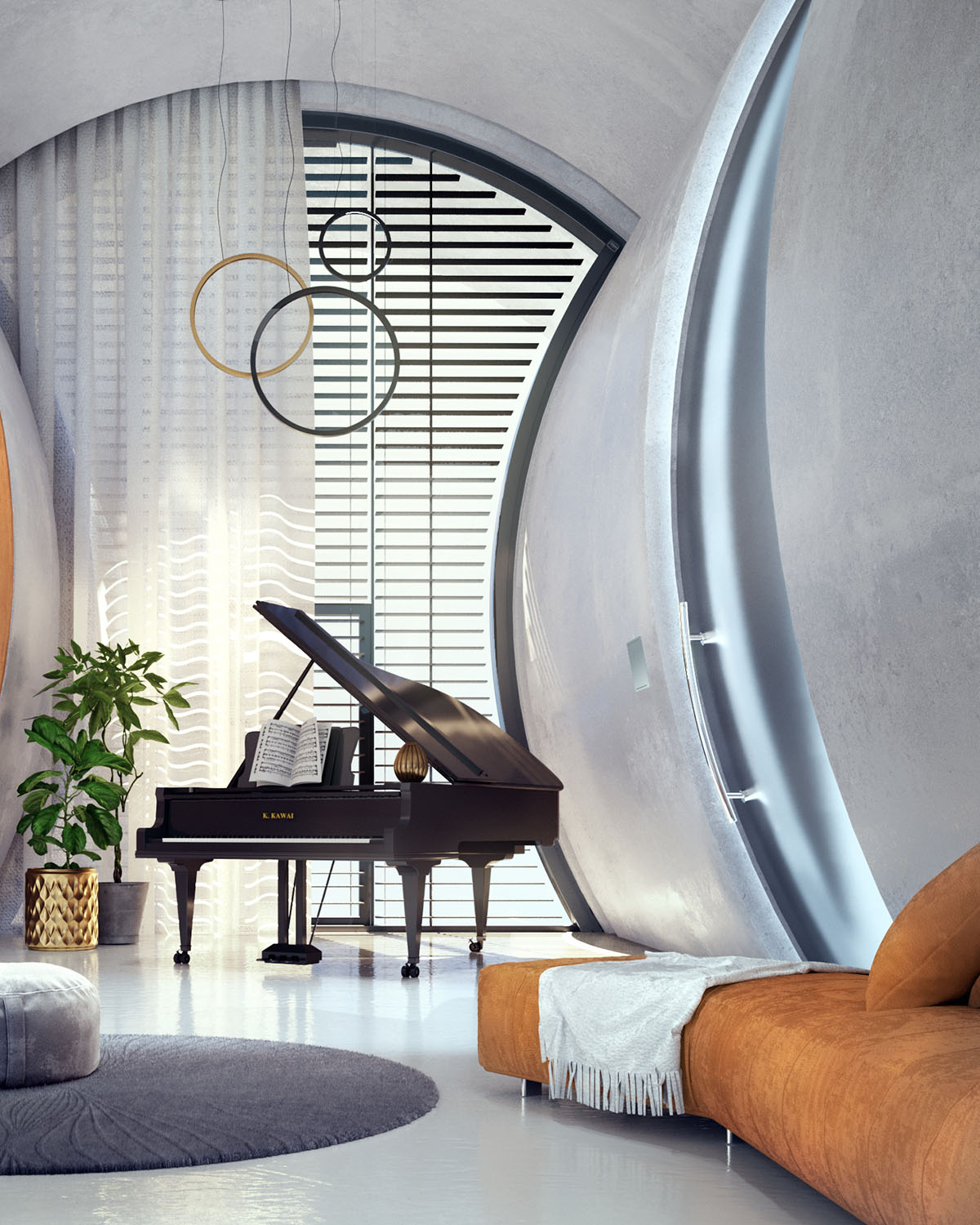 Ring pendants drop over the piano, paying subtle homage to the Audi brand and the curvaceous interior walls. 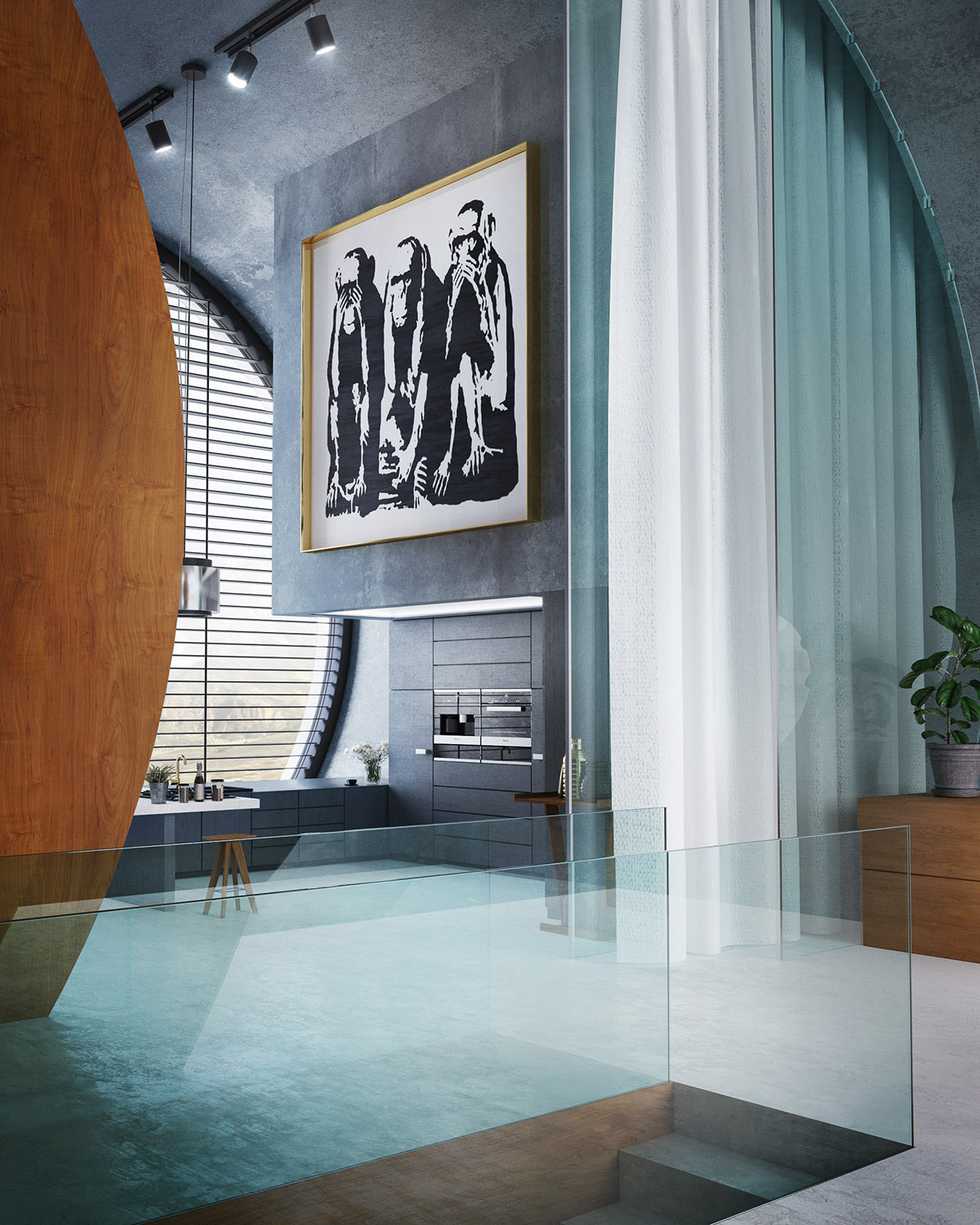 The common space continues into a large kitchen with a pantry, and an adjoining home office with library. The property has two bedrooms with ensuite bathrooms, and three powder rooms. Although ceiling height would accommodate a second floor, the void has been left uninterrupted to create a dramatic conclusion. 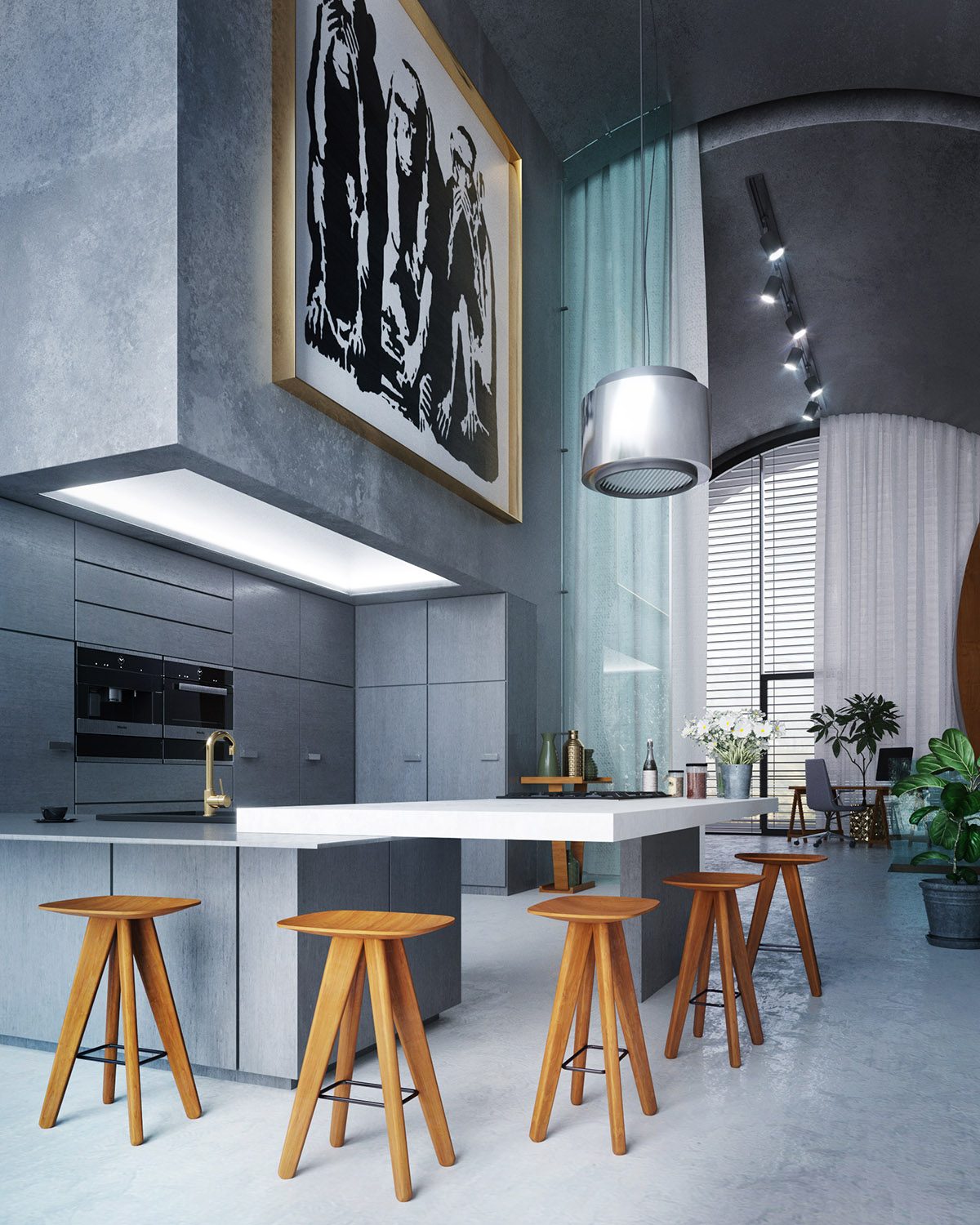 Grey kitchen cabinets merge with the building’s raw concrete mass. A dining table links onto the end of a kitchen peninsula, adding a crisp white top to break the grey monotony. Wooden swivel bar stools chime a much warmer note inside the colour scheme, which is supplemented by a statement gold kitchen faucet. Enormous curtains wait to be drawn across the circular windows of the home, and between individual spaces. 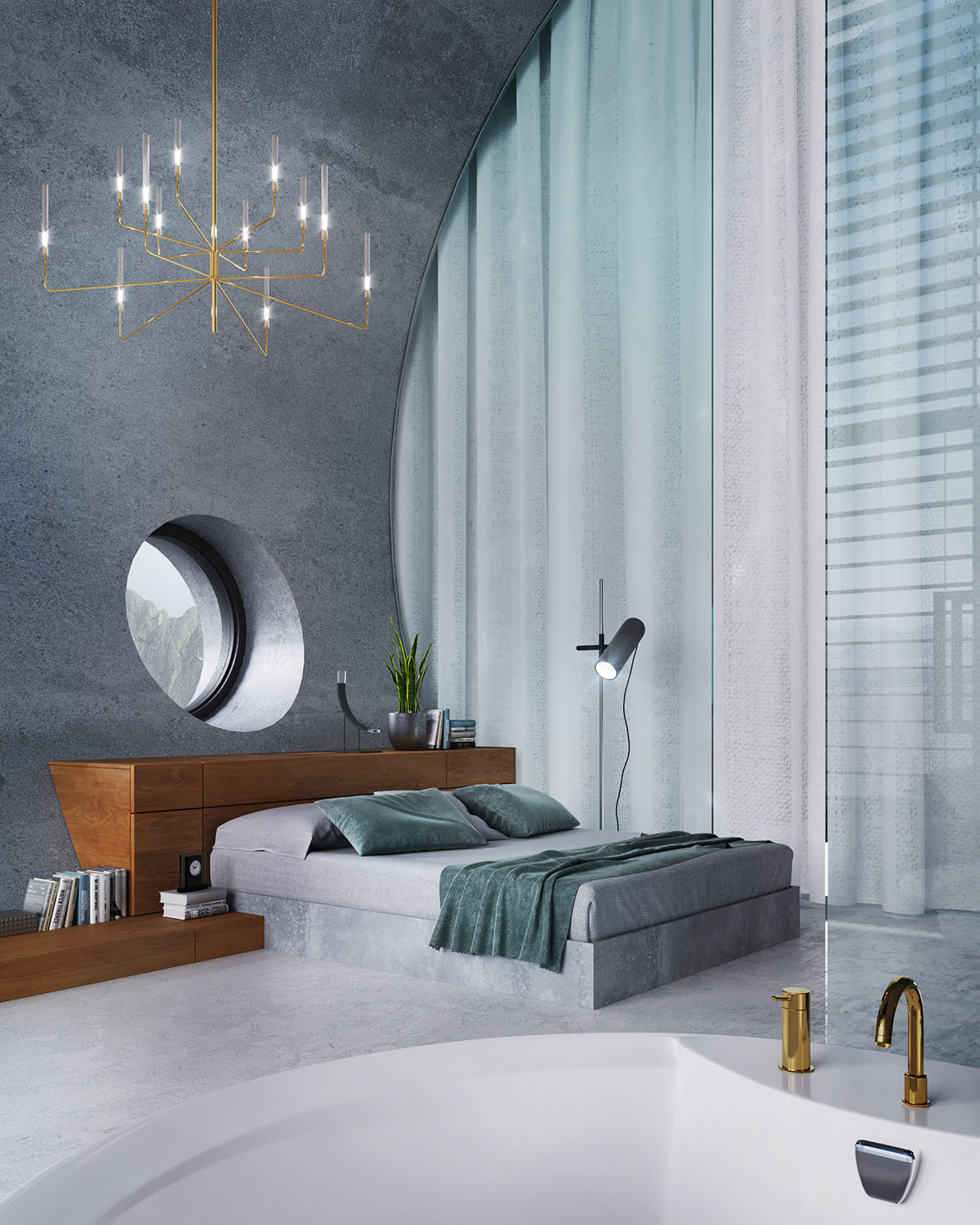 Bedroom furniture has been built into the slope of the walls for a satisfyingly integrated finish. A gold modern chandelier complements the warm stain on the wooden bedstead. A modern floor lamp highlights a jade green bed set. 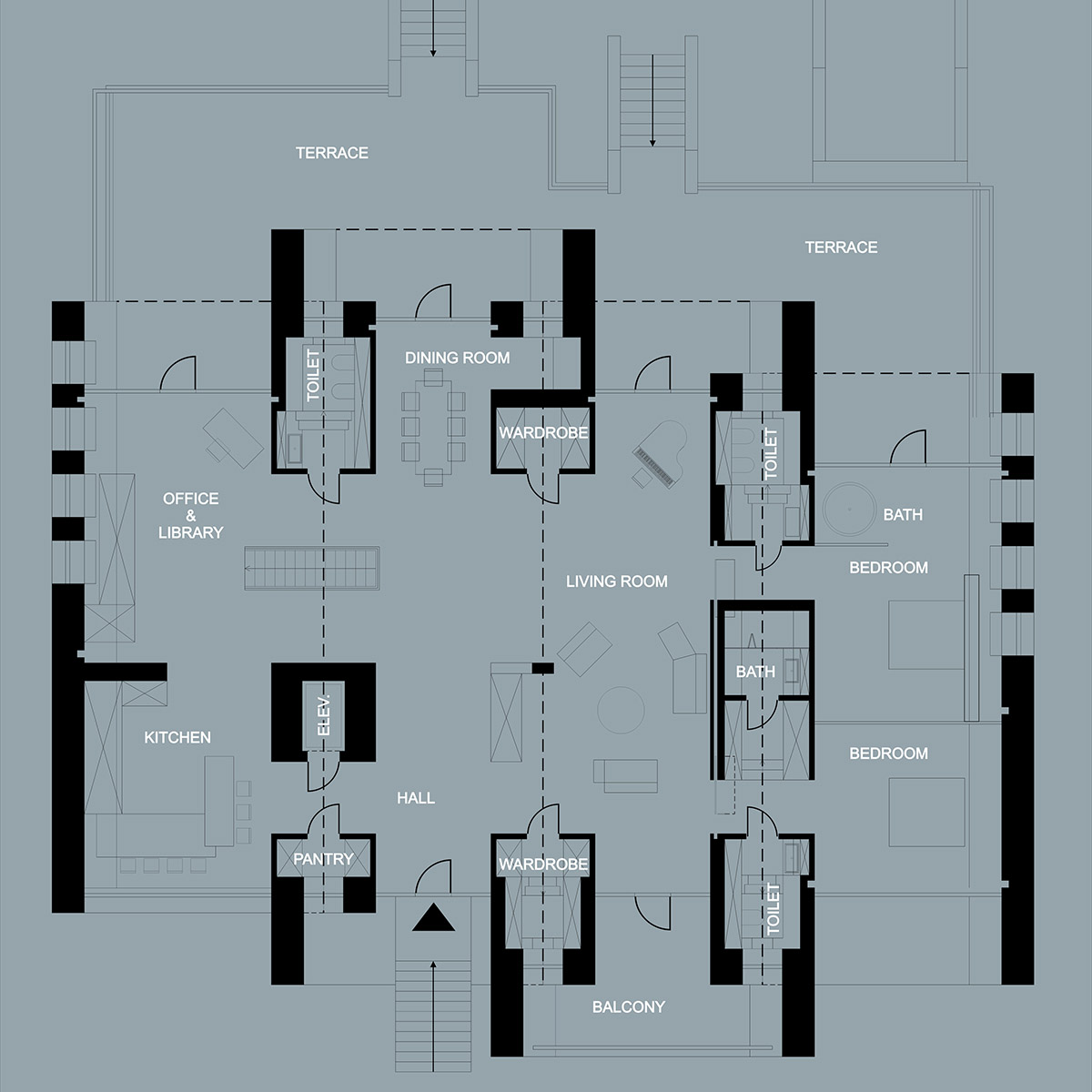 The floor plan illustrates how the terraces can be accessed from various points of the home, including the master bedroom, living room, formal dining room, and via the office/library combo by the kitchen. 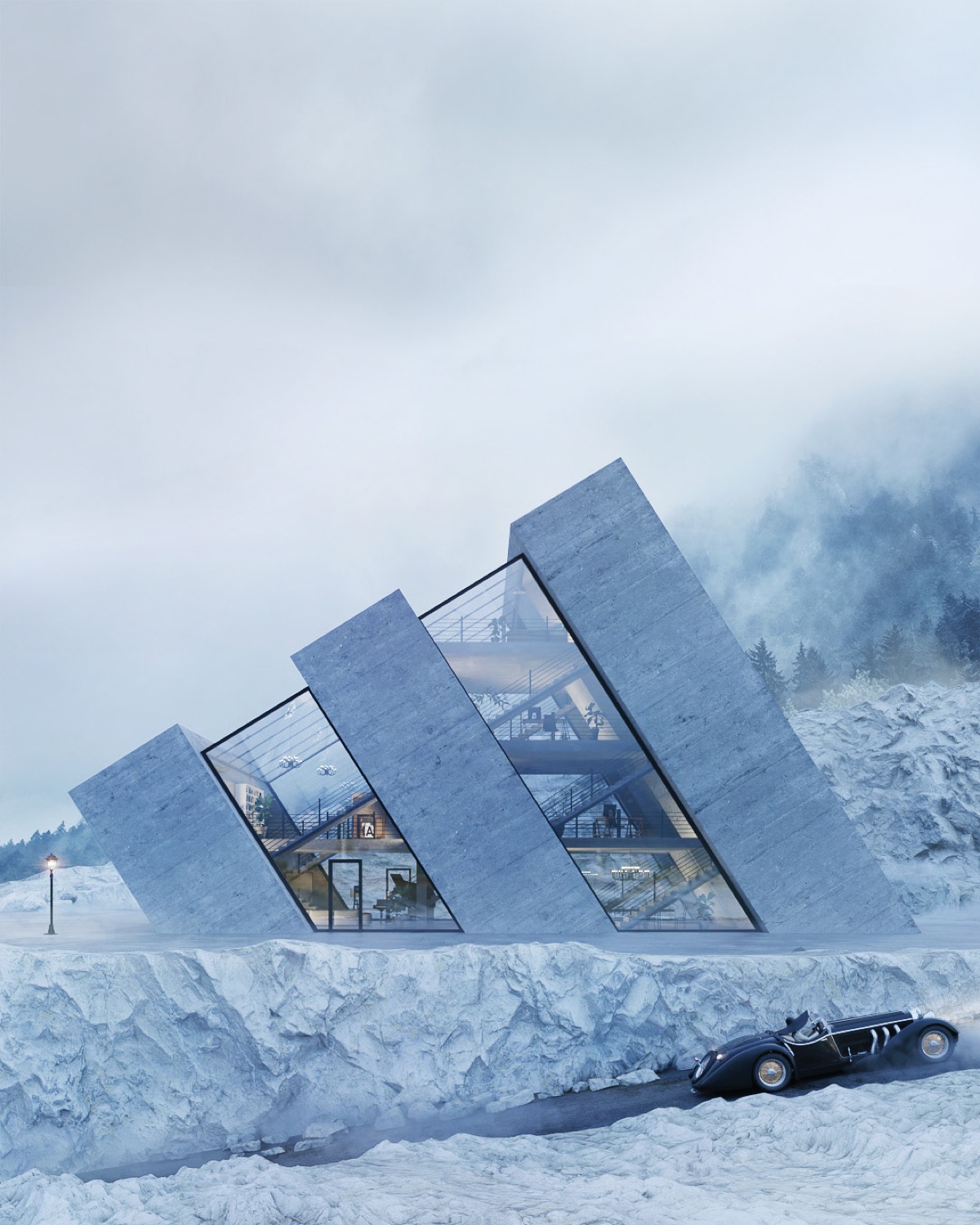 The Adidas home is a triangular construction, which references Adidas’s modern triple stripe logo rather than the original Trefoil motif. 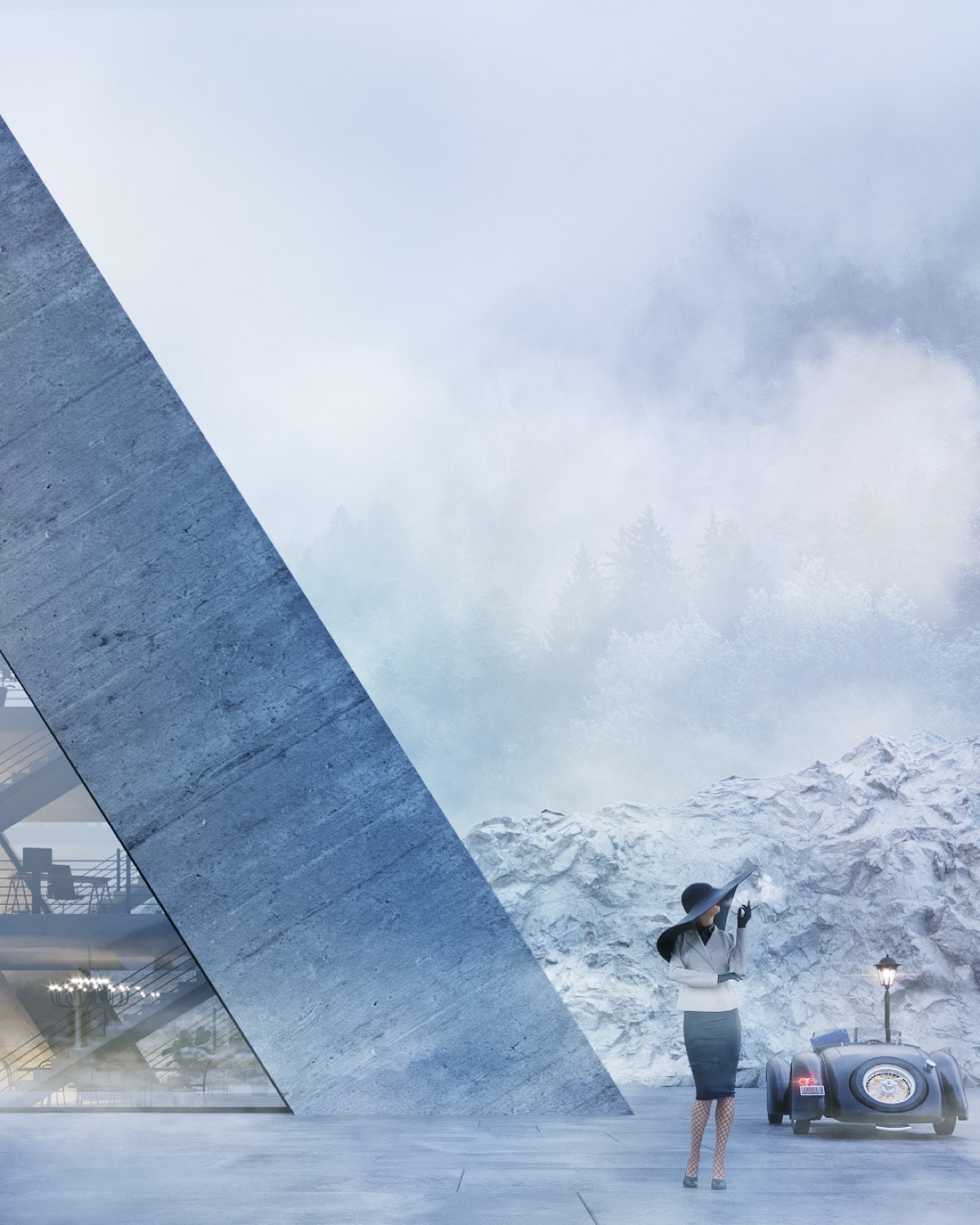 Great sloping windows separate the hulking concrete volumes of the famous triple stripe, looking like the supercilious den of some shark owning bad guy in a rip-roaring spy movie. 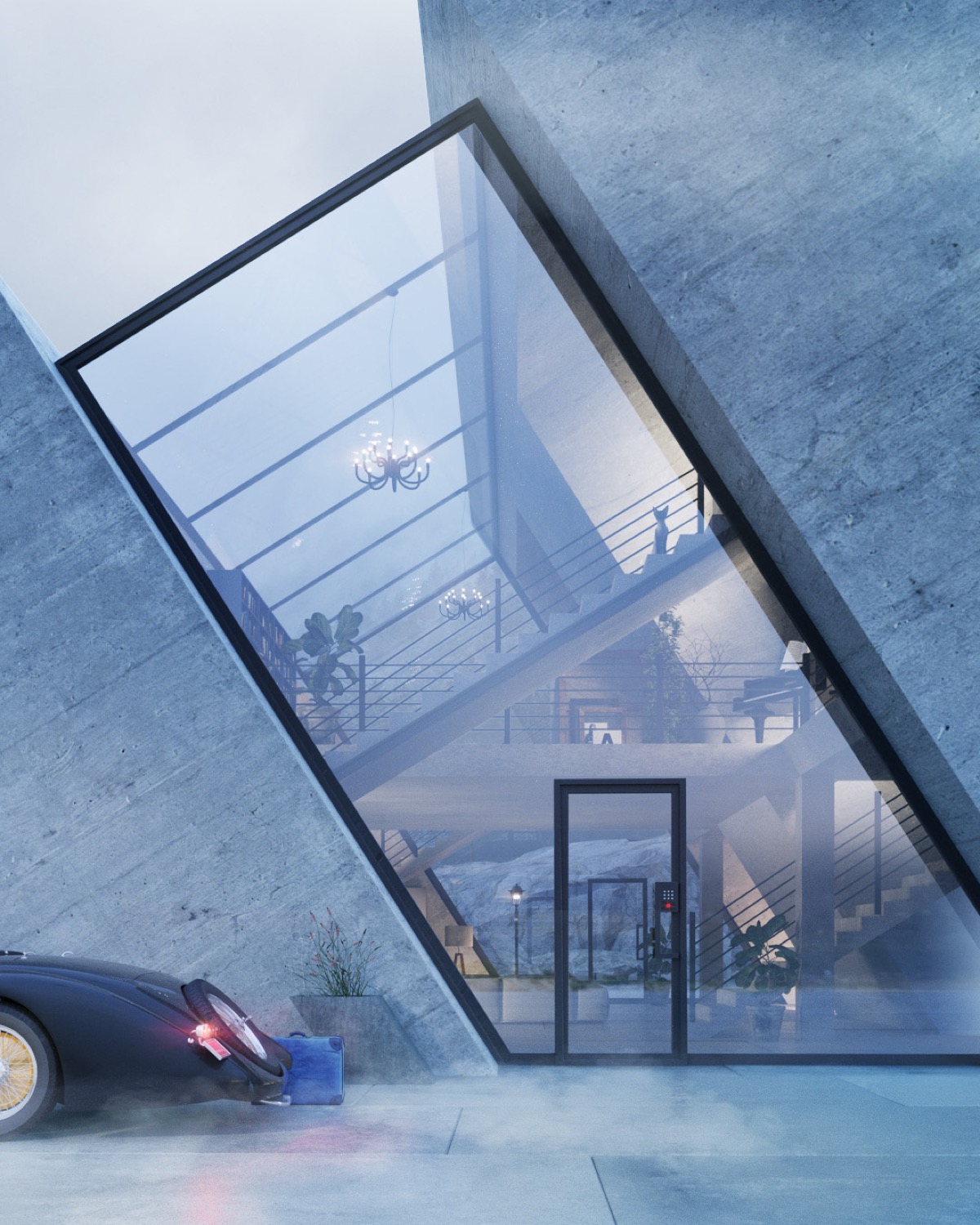 The glass expanses extend all the way over the roof of the building, flooding both floors of the home with natural light. 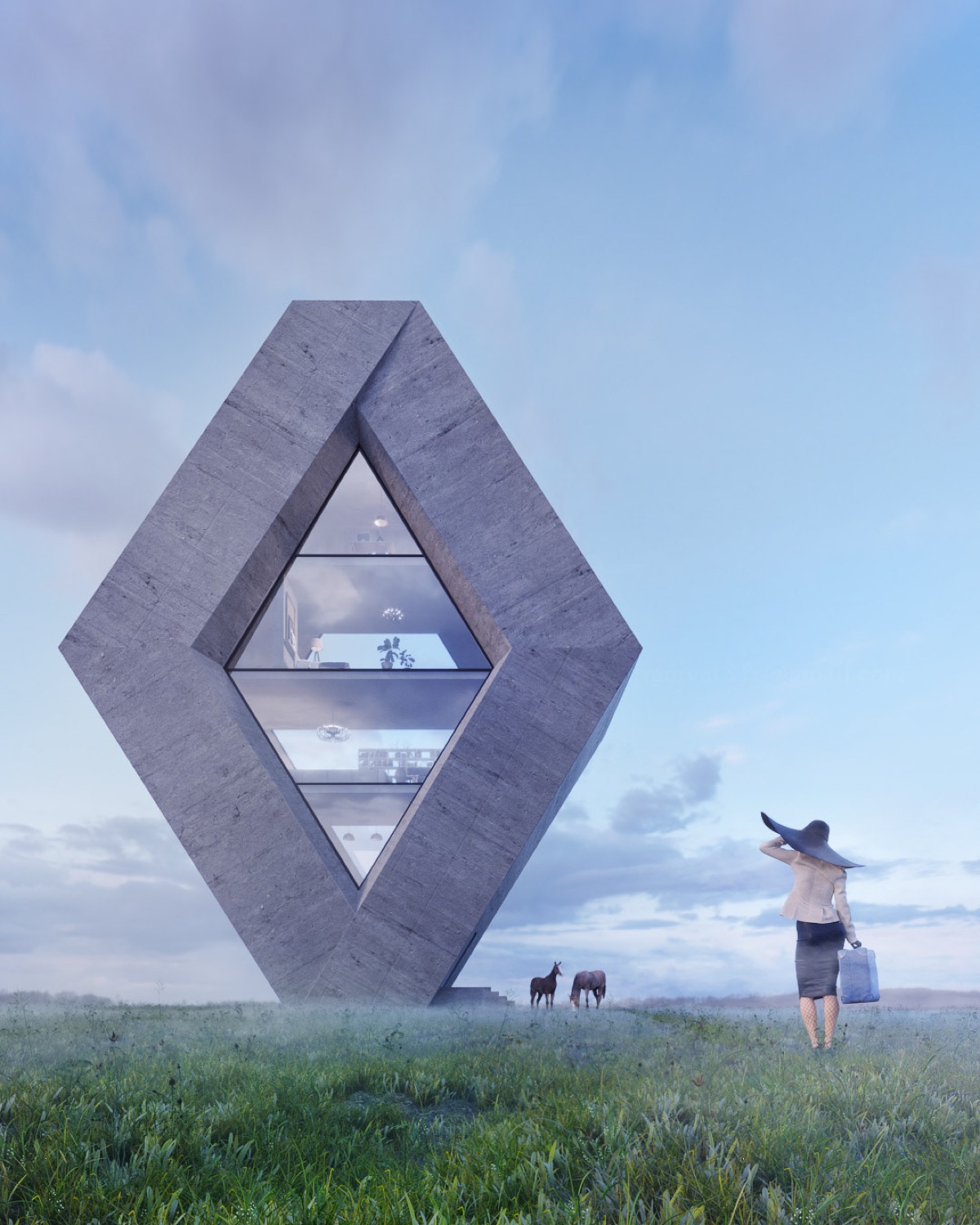 Looking more like an alien spacecraft than your average home, the Renault inspired concept house is a gravity-defying diamond. The top heavy sculptural form threatens to topple, but instead holds firm in the pasture. 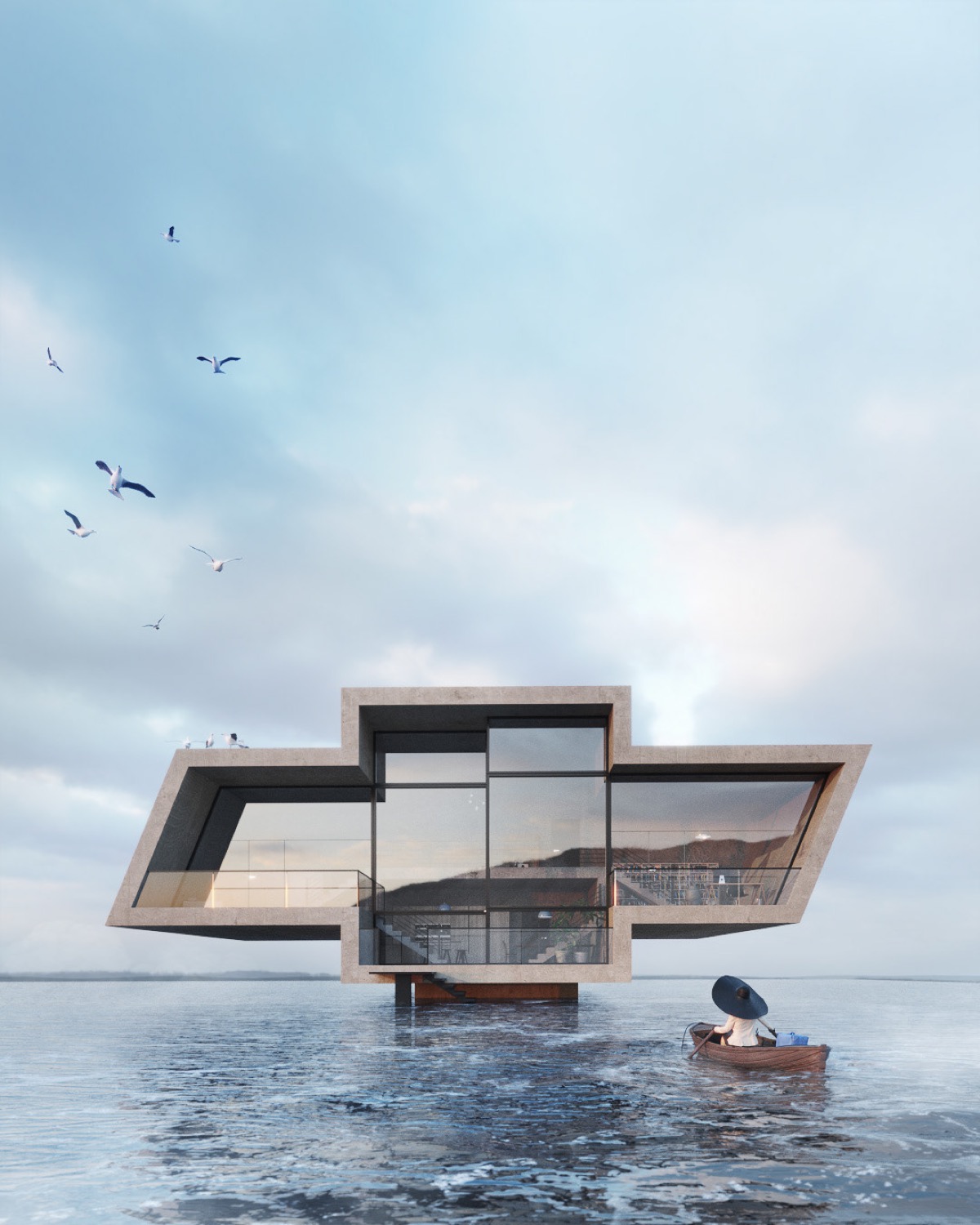 The Chevrolet bowtie logo was introduced by company co-founder William C. Durant in 1913, and now it serves as the inspiration for an entirely water locked man-made island. Glass walls fill the outline of the sloping bowtie emblem, which reflect the sky and neighbouring land mass. Inside the concrete construction, multiple floor levels spread out across the open plan home, with staircases leading off in every direction. 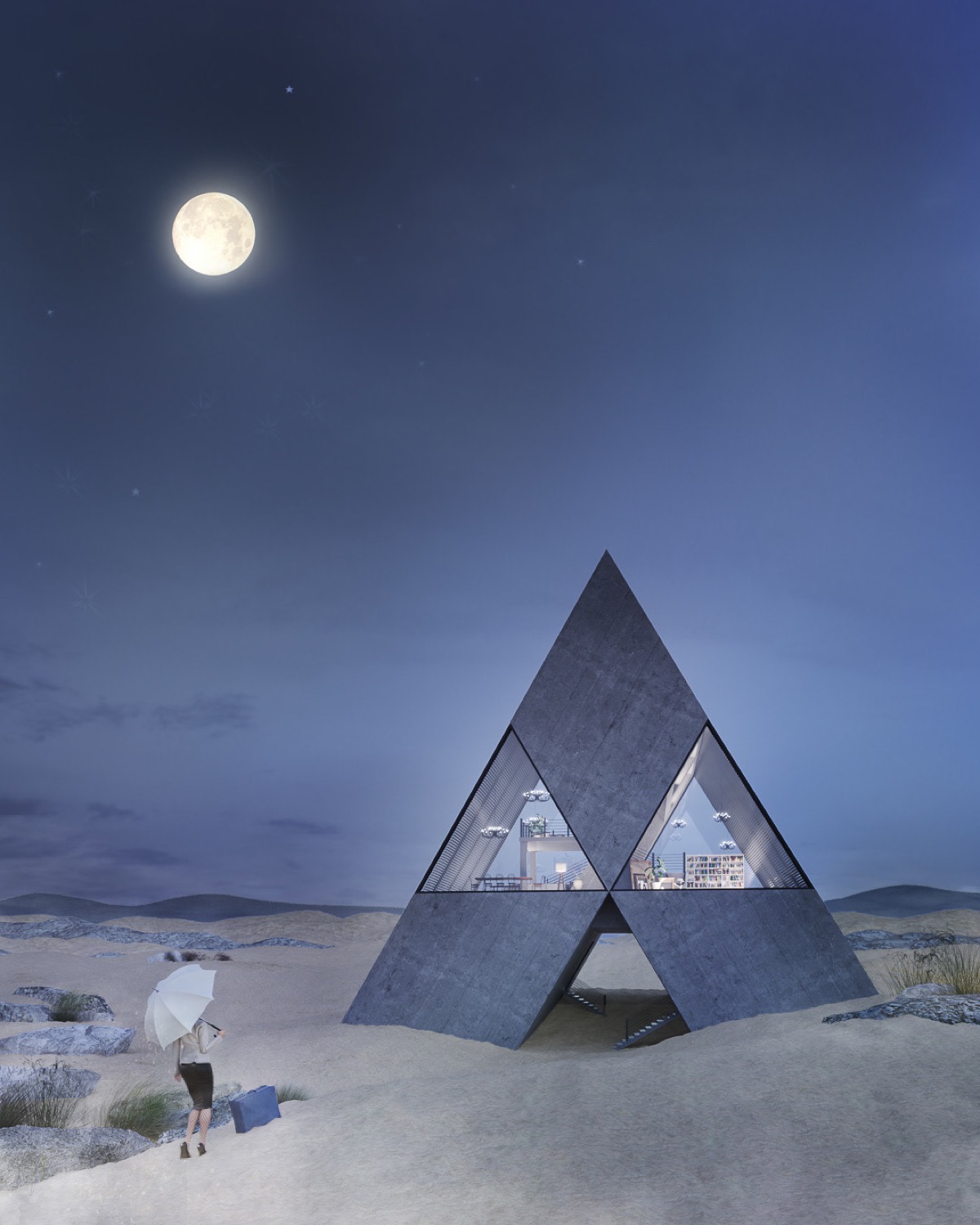 The three diamonds described in the Japanese Mitsubishi brand name create a huge tent shaped home with an open void underneath. Triangular windows separate off the upper diamond, allowing views from the front of the building all the way through to the sky beyond. An elevated concrete volume gives rise to an additional story within the main floor of the building, whilst more living spaces are concealed behind the concrete facade.