You’ve got the collectable figures, the poster artwork, all the wearable merch and even the bubble bath, what more could a die hard Star Wars fan need in their lives… Well, if you haven’t got a Star Wars themed area rug then can you even really call yourself a fan? Up your fandom status with some serious Star Wars home decor, whether it be just for your private bedroom or for pride of place out in the living room. Sink your feet into the Millenium Falcon, step out with prints inspired by Rebel Alliance squadrons, or sneak over to the dark side with detailed Darth Vader motifs.

The Rebellion Rug: This washable rug sends the iconic millennium falcon, an A-wing and X-wings zooming under your coffee table, all in high contrast black and white brushstroke print that will slot easily into any decor scheme at warp speed. 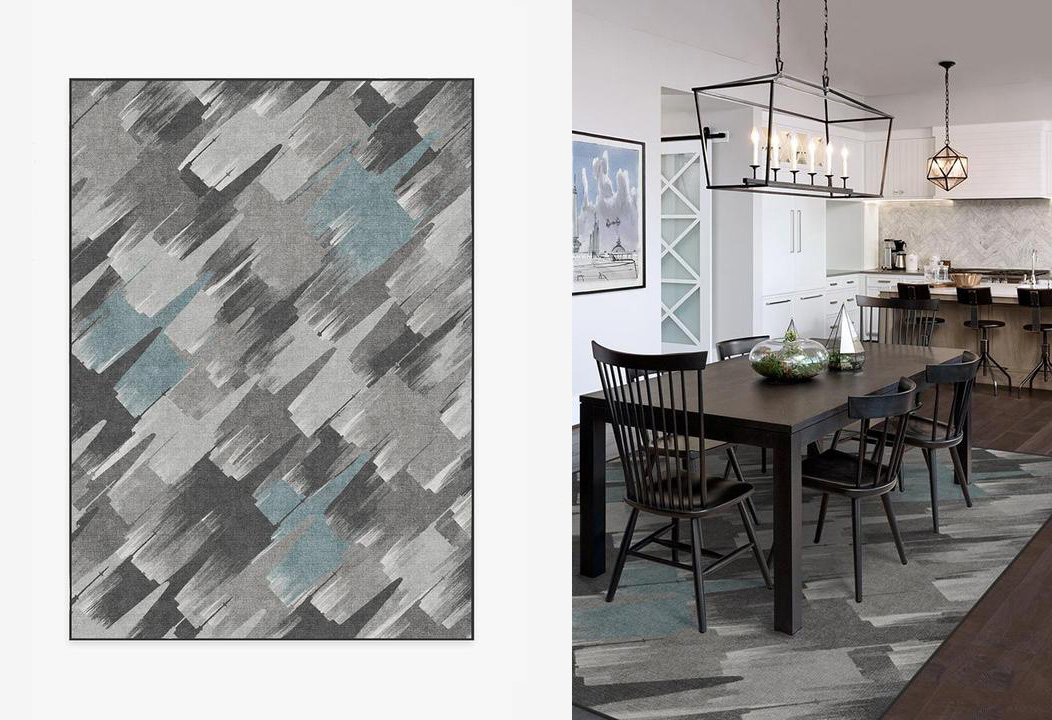 Rogue Squadron Dark Teal Rug: If you’re living with someone who is less than enthused about your Star Wars obsession (how rude), then you’ll appreciate this Rogue Squadron rug that would pass for a stylishly abstract brush stroke pattern with pleasant teal accents. Not a soul has to know that the Rebel Alliance starfighter squadron are fighting the Galactic Civil War beneath your feet at dinnertime–but you’ll know. 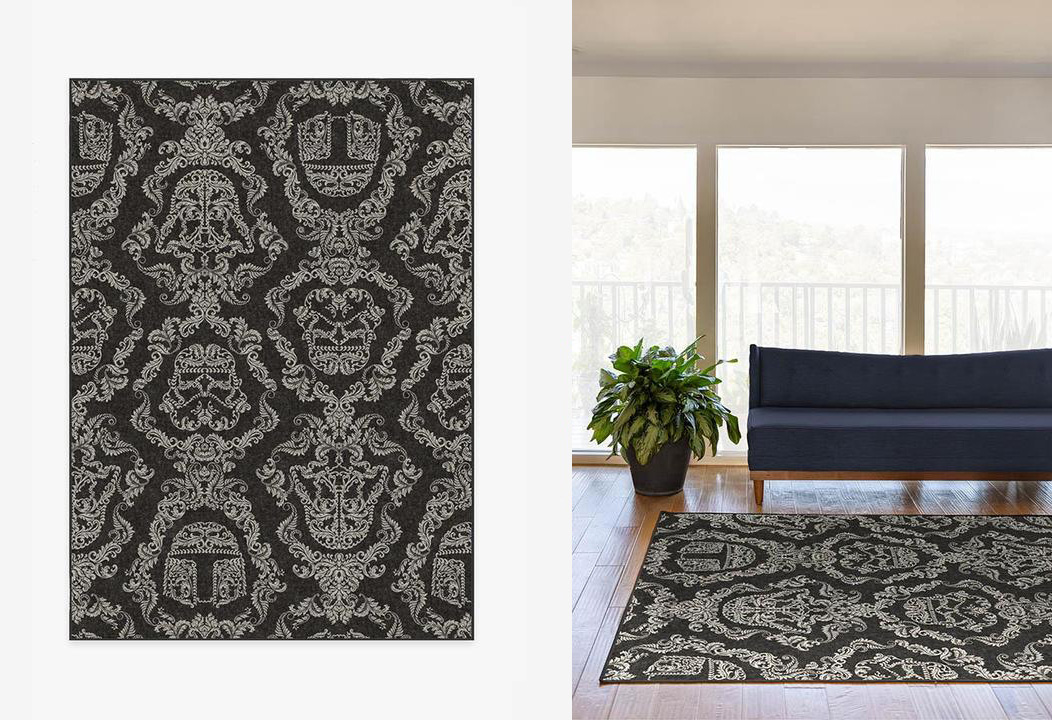 Dark Side Damask Charcoal Rug: Be seduced by the power of the dark side with this mysterious damask rug design. Featuring stylised depictions of the Star Wars franchise’s most famed villains, Darth Vader, Boba Fett and the iconic Stormtroopers, this is one to win over the unenlightened. 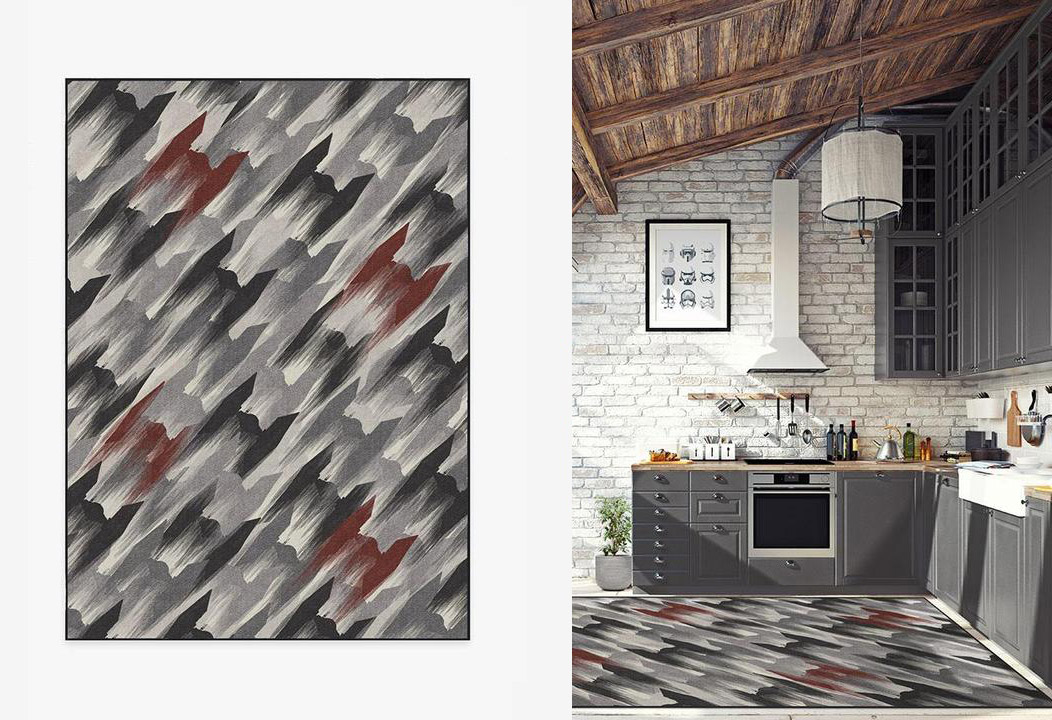 TIE Fighter Houndstooth Black Rug: Is it houndstooth, or is it TIE Fighters? The diagonal brushstroke-like pattern of ships in gunmetal, grey, wine and pearl forms a classic houndstooth pattern that will please the fashion forward and followers of the Empire. 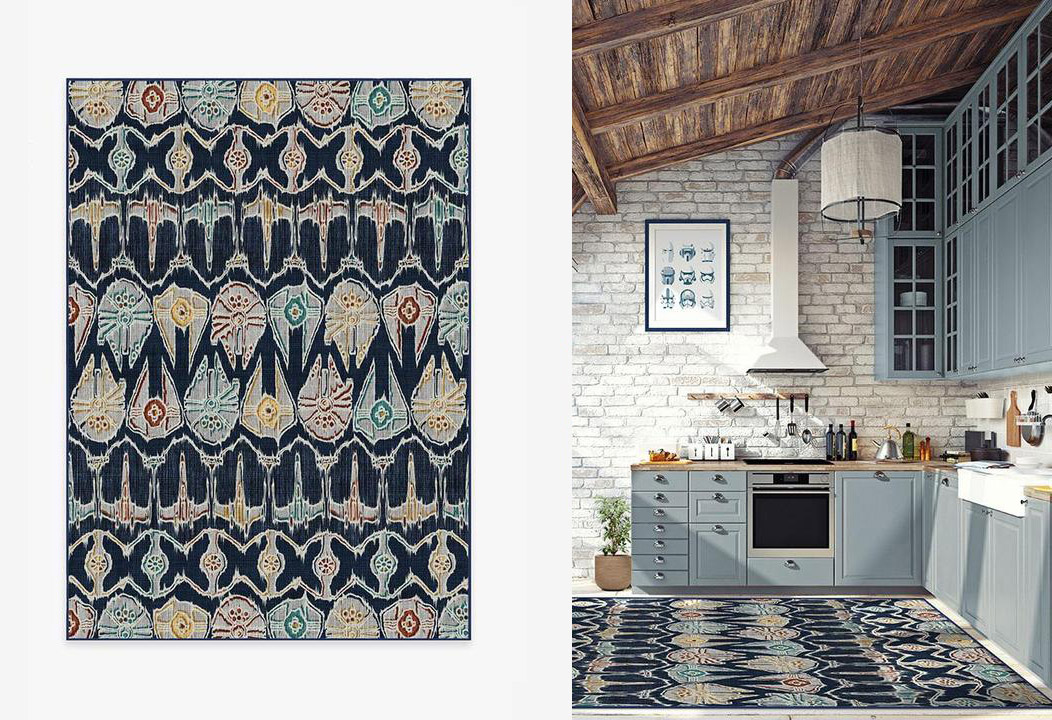 Corellian Ikat Navy: And just like that, Star Wars goes Ikat. The light and dark sides meet in a tremendous batte on your kitchen floor in this mashup of TIE Inceptors, Imperial Star Destroyers, X-wing Starfighters and the fastest hunk-of-junk in the galaxy, the Millennium Falcon. 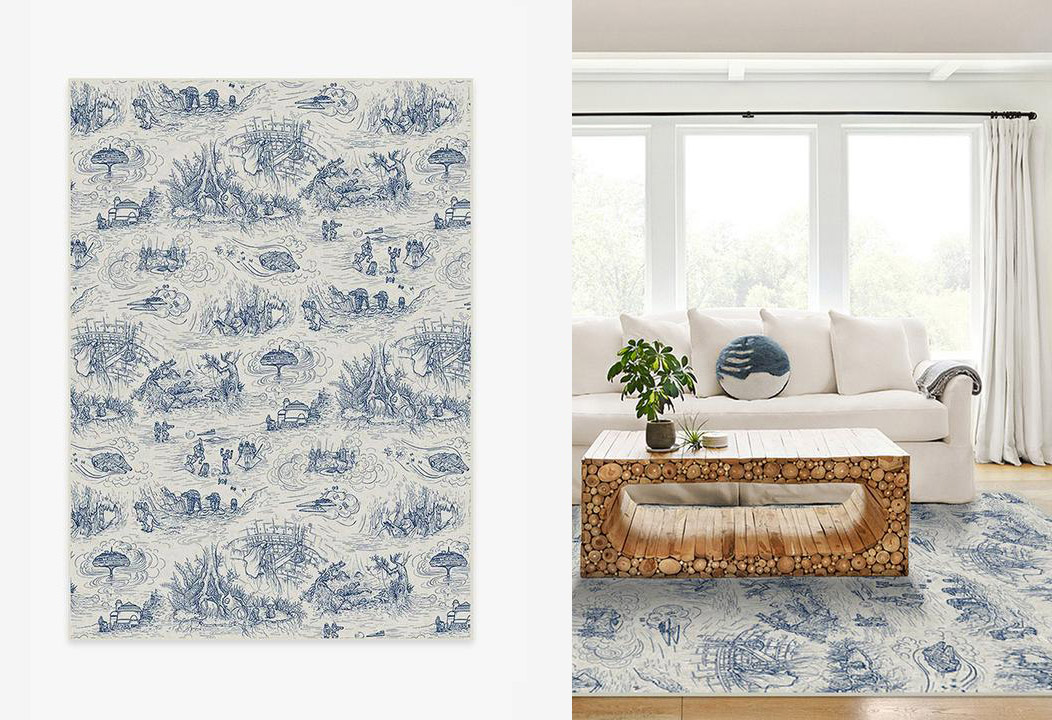 Star Wars Toile Blue Rug: Fans will love this captivating retelling of the iconic scenes from The Empire Strikes Back, laid out as an 18th century French toile style rug. Spot Yoda training up Luke Skywalker on Dagobah, and the much reenacted “I am your father” Darth Vader scene, all meticulously hand-drawn in blue on pearl. 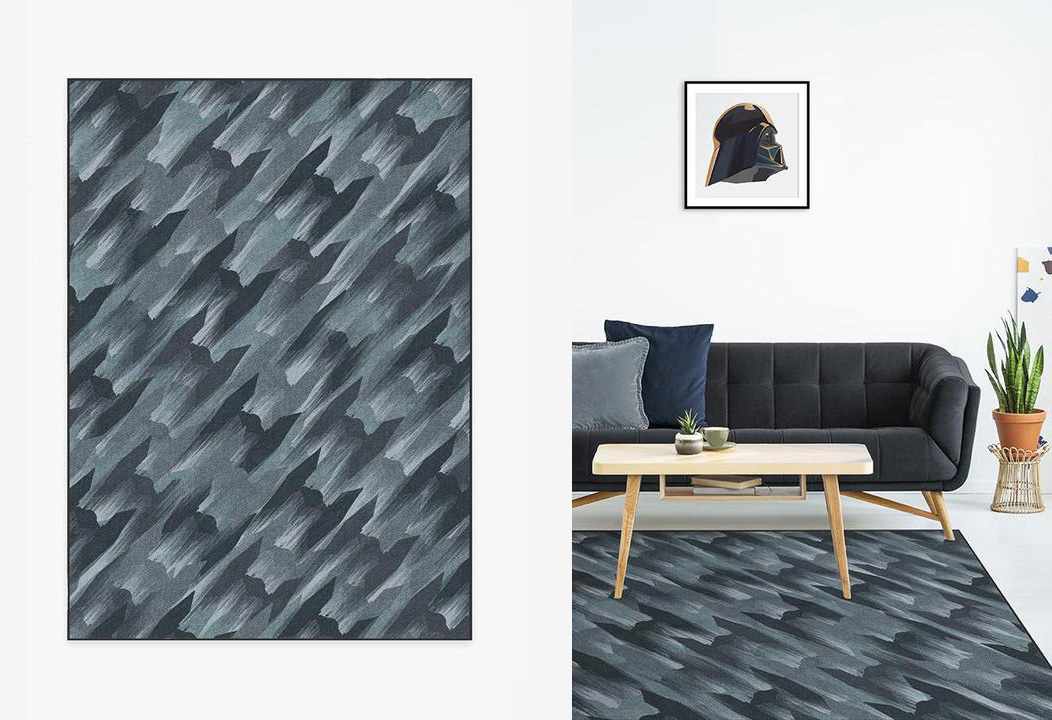 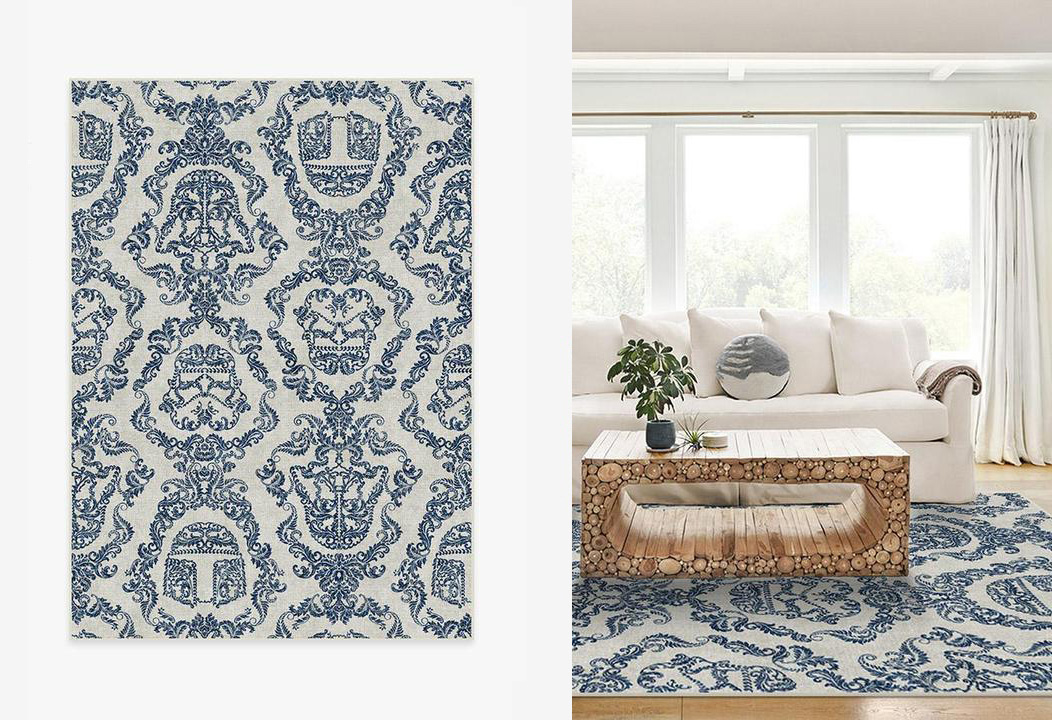 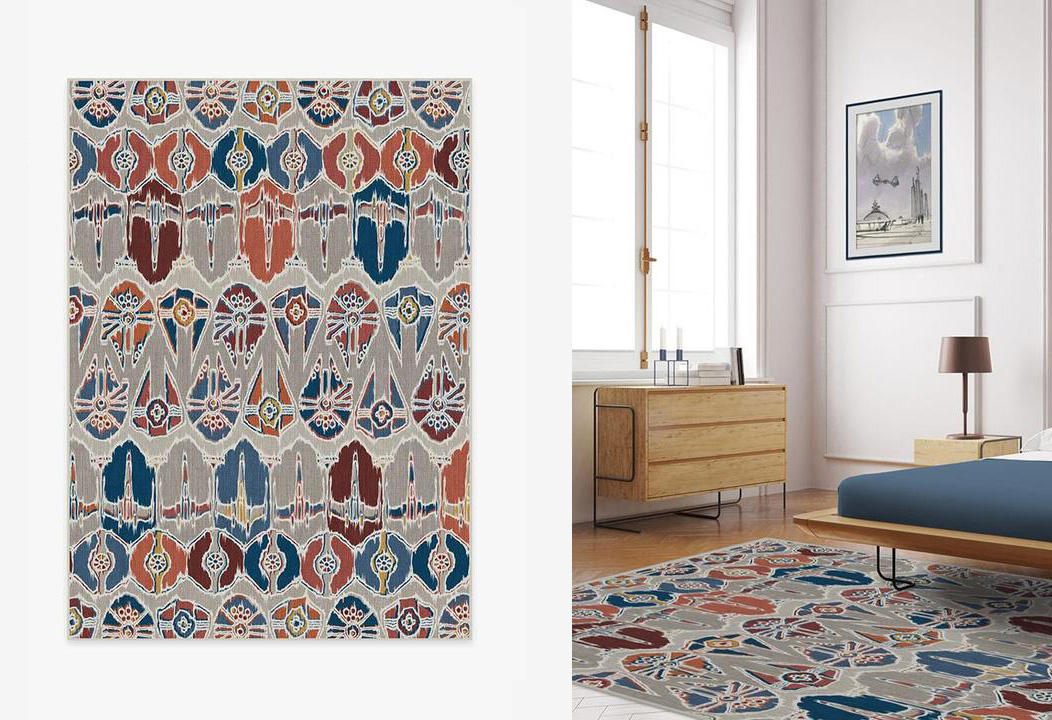 Corellian Ikat Polychrome Rug: Traditional ikat rugs don’t typically spark imagery of futuristic spacecraft in our heads, but hey, when it works, it works. This one features the Imperial fleet and the rebels in glorious polychrome on a background of silver. 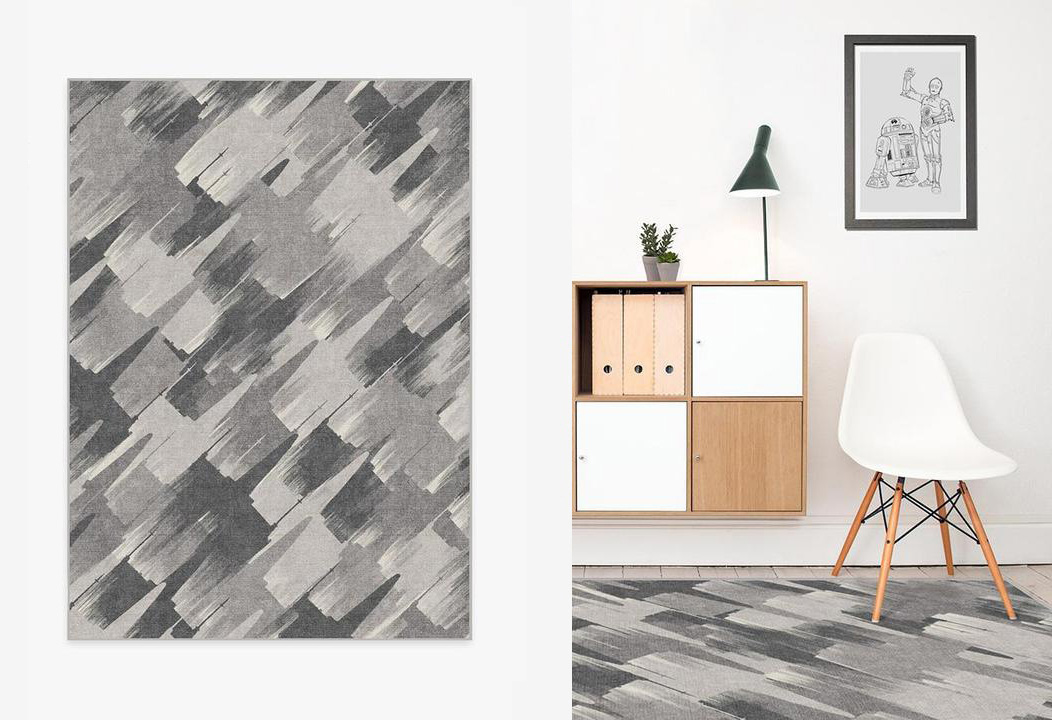 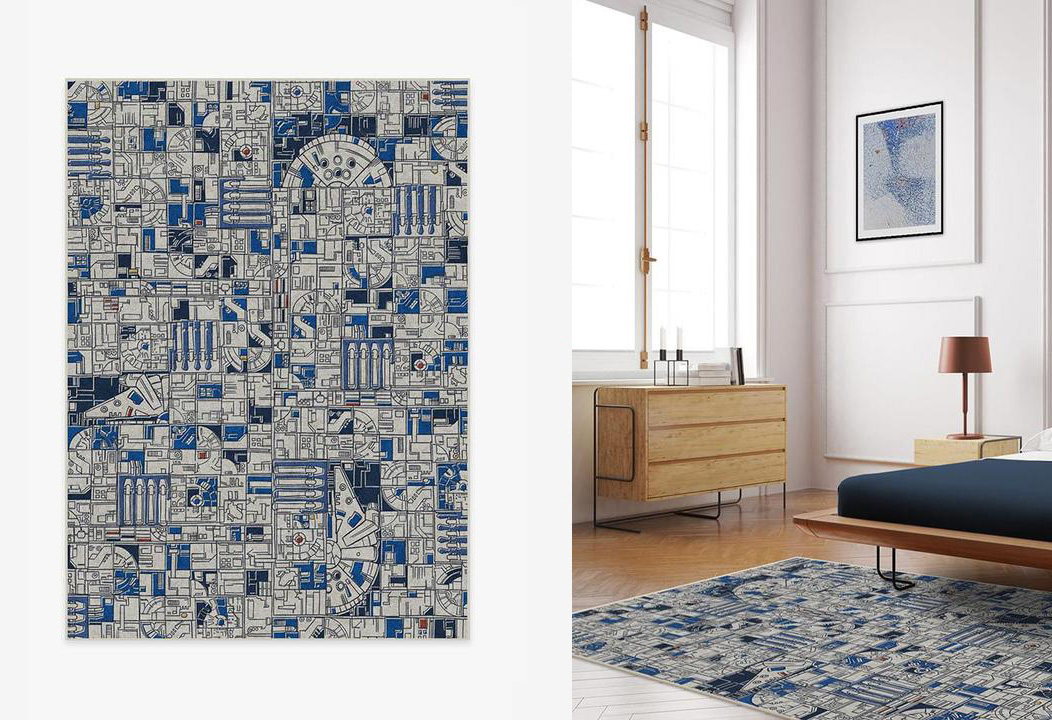 Smugglers Geo R2D2 Blue Rug: Pay tribute to your favourite droid through these recognisable hues of blue, bone white and a flash of rust. Hand-drawn illustrations reveal the modules of the Death Star, with details of the Millennium Falcon smuggled inside. 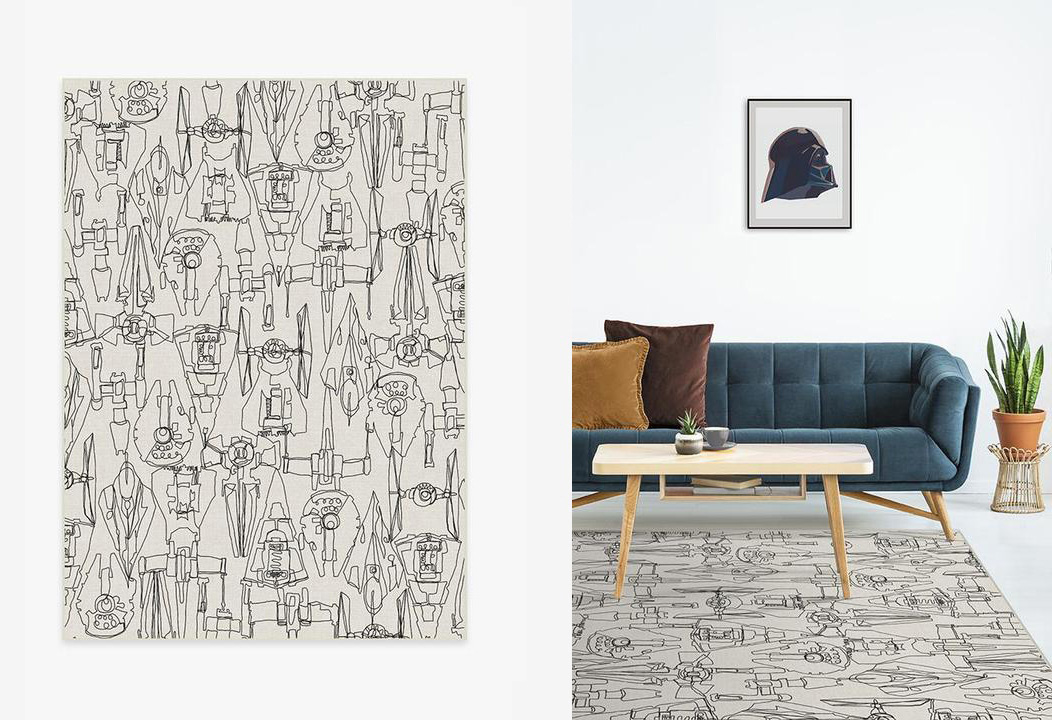 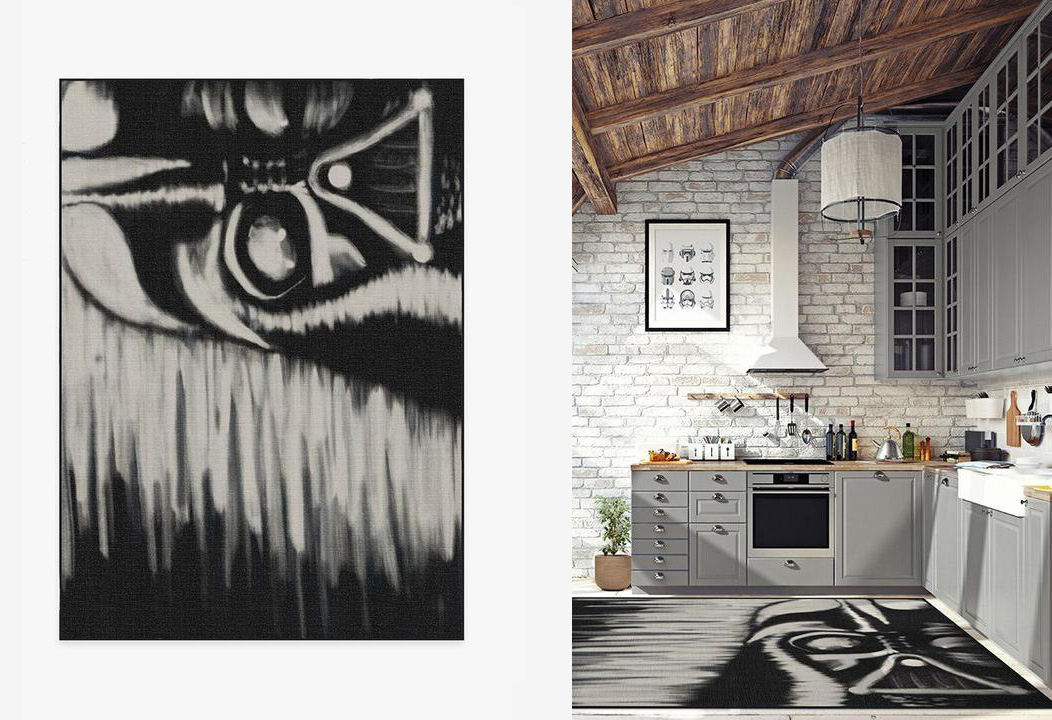 Darth Vader Rug: Take your kitchen to the dark side with this washable Darth Vader rug in menacing black, grey and midnight blue. A close crop shows the detail of Vader’s face in all of its evil glory. 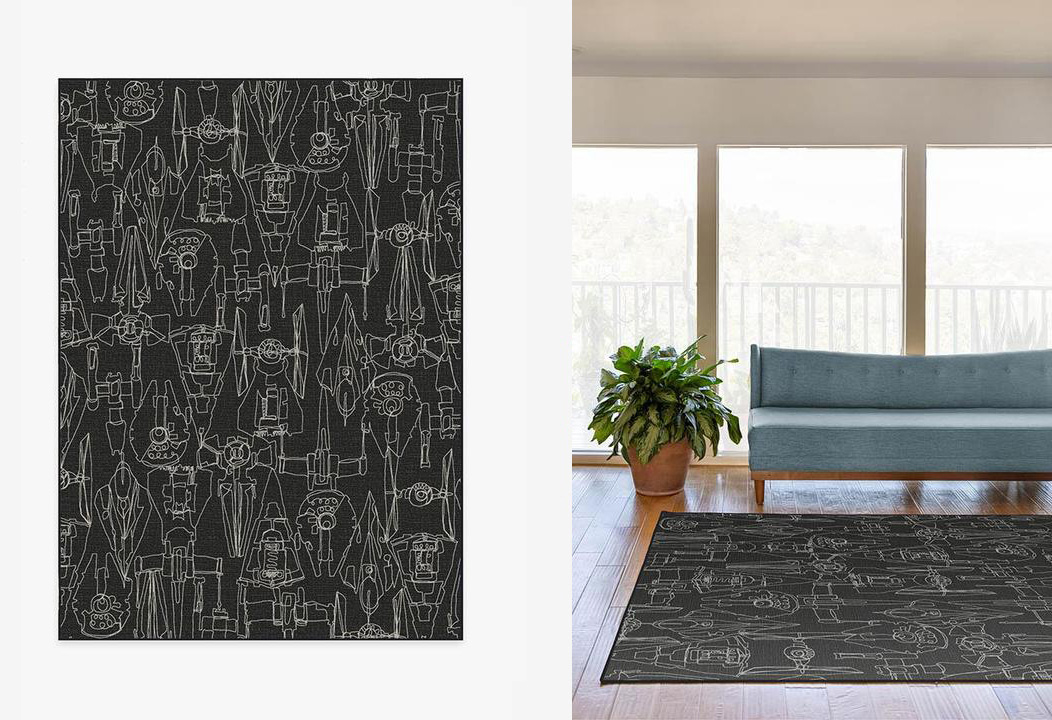 Star Wars Armada Black Rug: White on black sketches of the most iconic starships from a galaxy far, far away. This illustrative style would make a stylish addition to any Star Wars lover’s interior, child or Yoda. 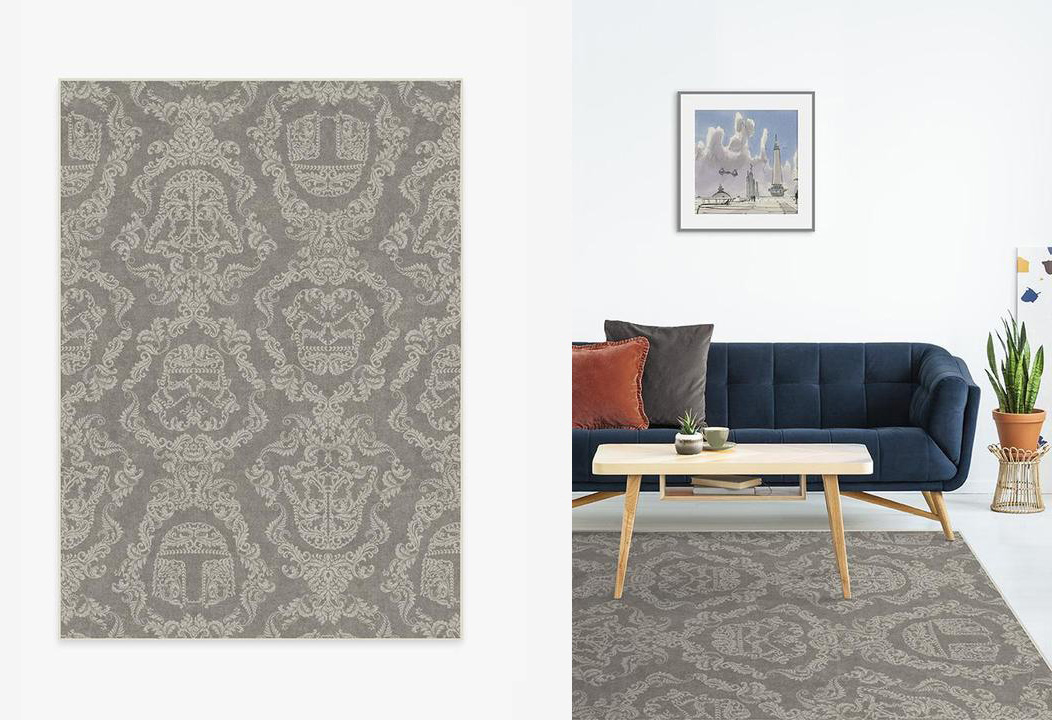 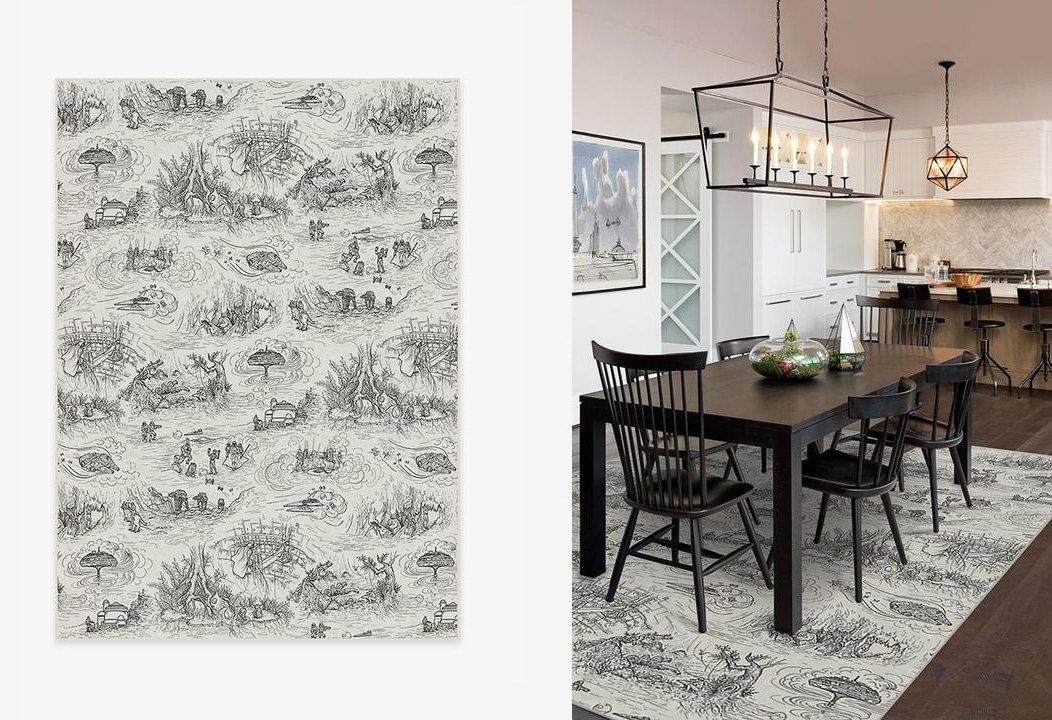 Star Wars Toile White Rug: Get lost in space and in intricately detailed hand-drawn depictions of The Empire Strikes Back, in cool grey and white toile. Enjoy this cultural phenomenon as you’ve never seen it before. 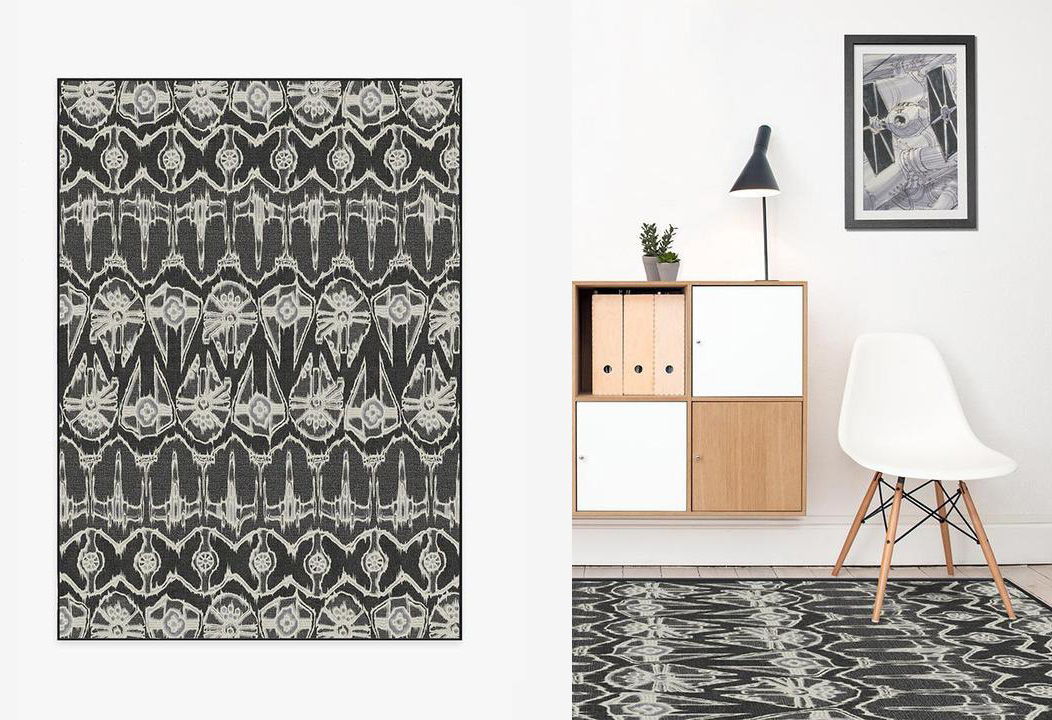 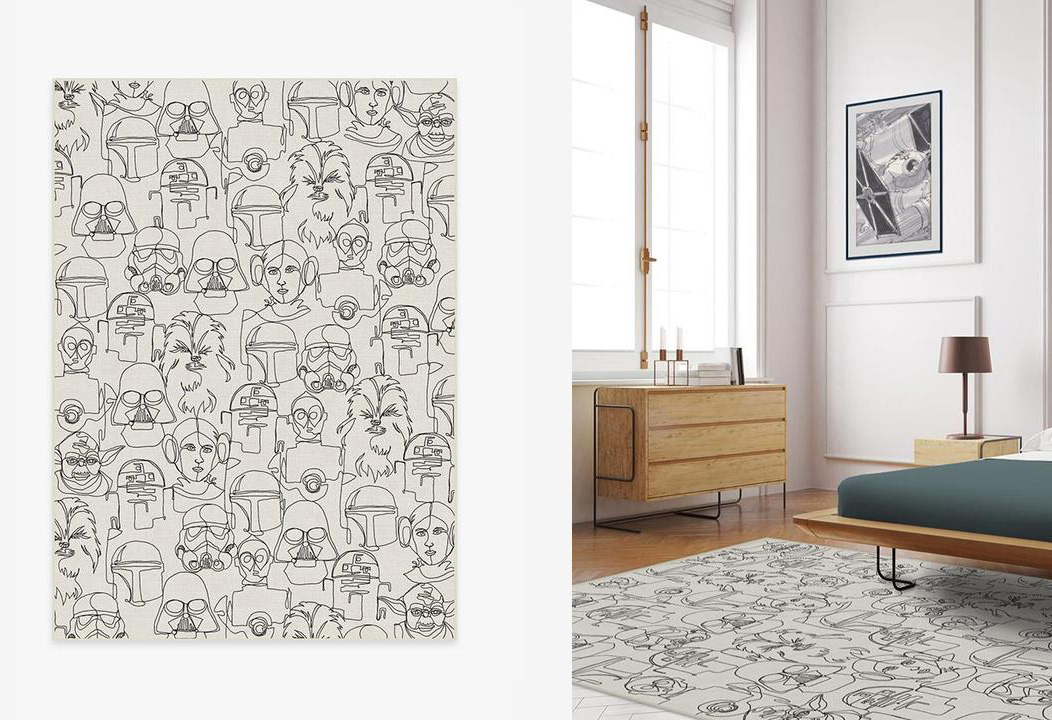 The Saga White & Black Rug: In a galaxy far, far away, this rug was made with portraits of Chewbacca, Princess Leia, R2-D2, C-3P0, Yoda, Boba Fett, Darth Vader and his Stormtroopers. Well, actually it was made in this galaxy. It’s still cool though. 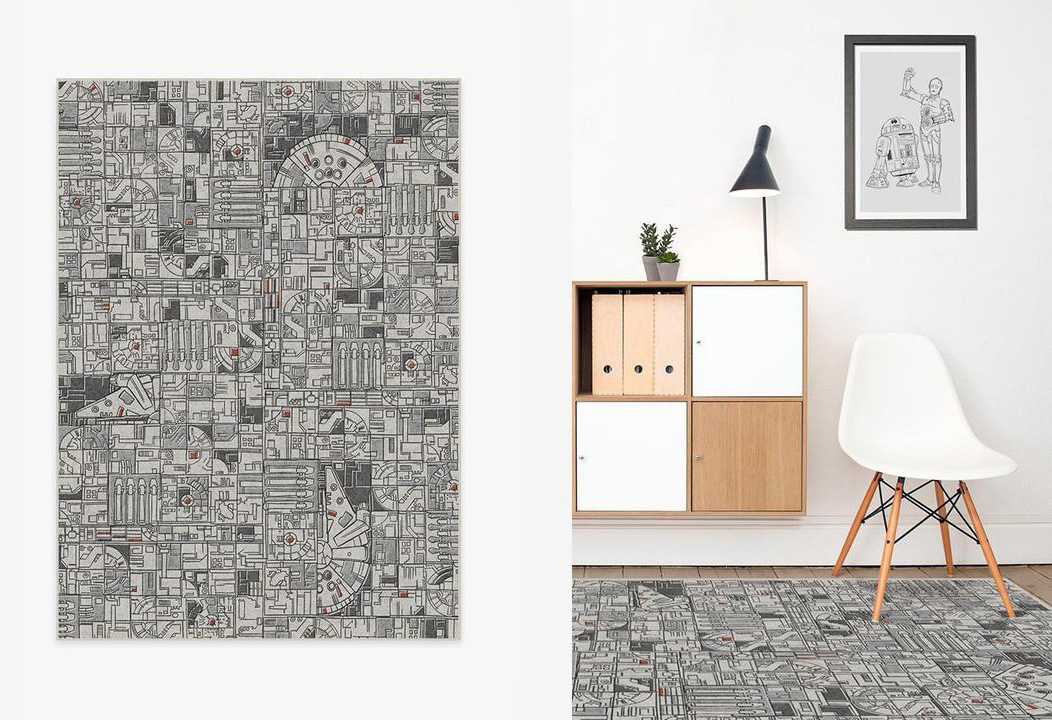 Smugglers Geo Grey Rug: Smuggle the truth. This grey colourway of the Smugglers rug makes a subtle geo pattern that mysteriously draws in the onlooker before its secrets of the Death Star and Millenium Falcon are revealed. 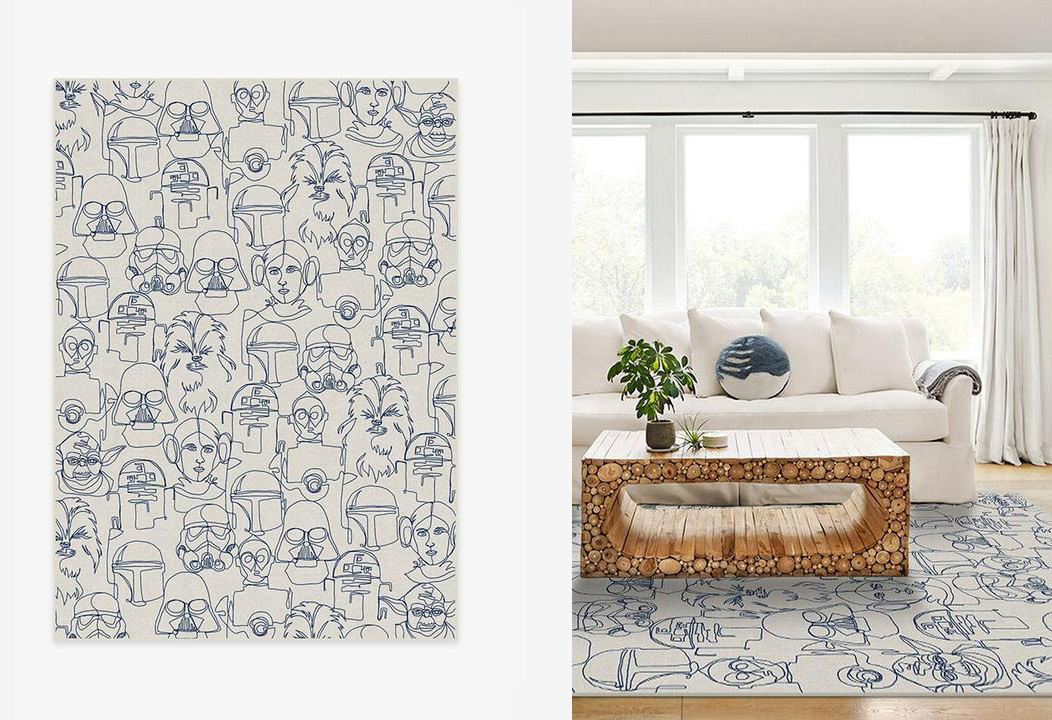 The Saga Delft Blue Rug: Stay on the light side with this pearl white saga rug, and its meticulously hand-drawn single stroke illustration in denim blue.

Sun Dec 27 , 2020
Like Architecture & Interior Design? Follow Us… Light and love exude from these two family focussed home interiors, created by DSEN. Wide open living spaces encourage family members to come together and interact whilst partaking in separate activities, whether that be cooking or catching up on a little TV. In […] 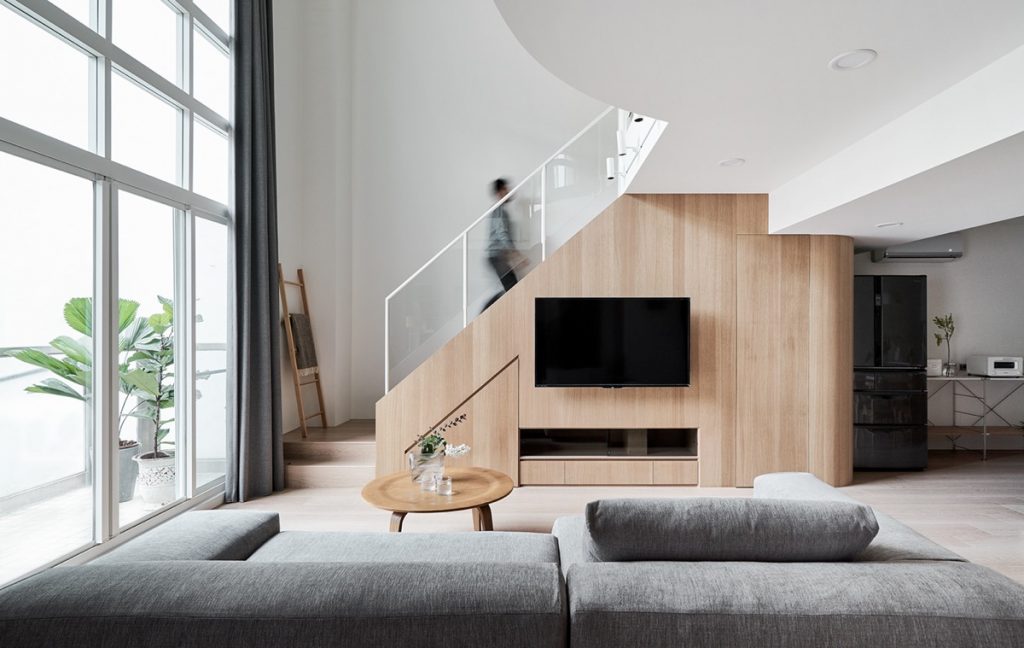