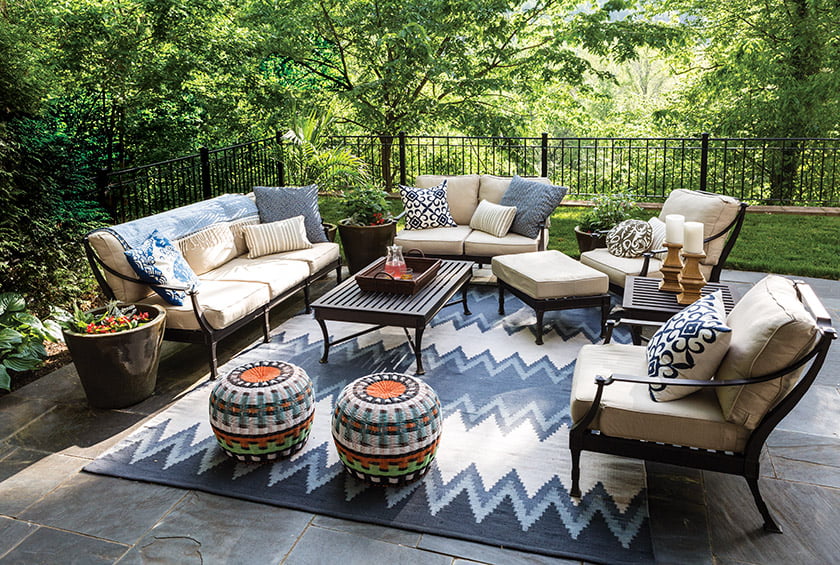 On balmy summer evenings, designer Tracy Schlegel can be found relaxing on her lofty deck, nestled among the tall trees lining the backyard of the home she shares with husband Mike and their two teenage children. The C&O Canal and Potomac River meander in the distance. “I sit there with a glass of wine and look out to the view,” reveals Tracy. “It feels like you’re in a treehouse.”

The sylvan parcel—bordered by protected parkland and located within Bethesda’s quaint Brookmont enclave—sealed the deal for the Schlegels in 2001. Charming outside yet crumbling inside, the 1928 “Hansel and Gretel cottage,” as Tracy describes it, checked all the boxes too. “We were purposefully looking for a house that needed a full makeover with the intent to completely gut it,” recounts the designer, who worked in advertising back

The concept of home-as-sanctuary was important to Old Town Alexandria residents Jerry Penso and Andrew Heinle, whose soaring, 3,140-square-foot penthouse comprises two conjoined condominiums. Both doctors who hail from California, they sought lots of natural light and outdoor spaces, as well as scenic views. “We’d owned our original condo for five years before we purchased the neighboring one in 2016,” says Penso. “Soon after that, we hired Runningdog Architects to help us combine the two units in a way that felt like one home.”

Architects Eric Carle and Warren Wick were tasked with figuring out the nuts and bolts of a tricky redesign in the Brutalist-style concrete high-rise, built in 1976. They drew up plans, obtained necessary permits and devised a way to combine the two units into a single, breathtaking penthouse.

Modern Japanese Interiors With A Sense of Serenity

How to Incorporate Retaining Walls into Your Landscape Design