When Sharon Kleinman got to work on the interiors of a new Rehoboth Beach house, she had not one client—but 10. Architect Greg Hastings designed the contemporary nine-bedroom retreat; construction was underway when the designer came on board.

The owners, their two grown daughters with husbands and four grandchildren all had a say in the process. “You’d think with so many opinions involved that it might have been difficult, but we had a great time,” enthuses Kleinman. “We worked to incorporate everybody’s style and interests into their personal spaces.”

On the ground floor of the home, there are two guest rooms and a powder room. A great room and adjoining kitchen and dining room occupy the second level, along with a TV room, master suite and screened porch. The third floor houses six bedrooms: one each 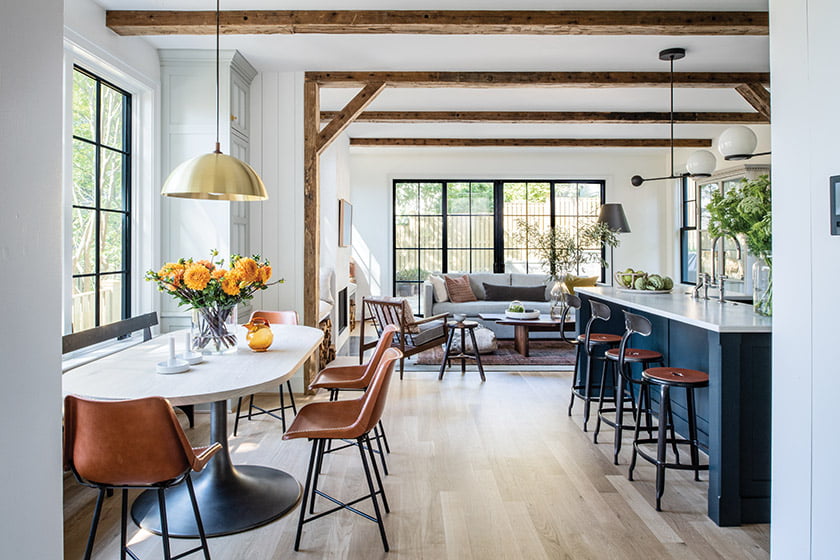 Vintage charm and a new, modern outlook come together in a custom Palisades home

When remodeling their tiny 1923 bungalow turned out to be problematic, a love for its quaint Palisades neighborhood prompted a DC couple to raze the abode and build a brand-new one in its place. “We’ve lived here since 2009,” says the wife. “We wanted this to be our forever DC home as our kids grow older.”

The original house was poorly structured with setback issues. However, as architect Richard Leggin, who was tapped for the job, recalls, “it had a charming street presence. Creating a new home that enhanced that neighborly spirit was an essential part of our initial planning.”

The wife agrees. “We live in a neighborhood where everyone loves to be on their front porch, watching the kids and dogs play. This was an element from our old house that we absolutely had to

There comes a time when only so much can be done to a house without starting over. “It was a never-ending ‘How do we make this house right?’” says designer Shazalynn Cavin-Winfrey, who oversaw eight years of improvements to Craig and Kari Shapero’s former abode in the Belle Haven neighborhood of Alexandria. In  2016, in the midst of yet another renovation, a home with a more open floor plan, better suited for entertaining, presented itself just a couple of blocks away.

Originally built in 1935, the center-hall colonial had undergone extensive renovations in 2009 and checked nearly every box on the Shaperos’ wish list: There was a large dining room, a bright kitchen, space for a formal library—and an enormous gun safe downstairs that could be converted into a wine cellar. A bonus was the airy foyer that

A design team puts an eclectic spin on a grand, 1920 abode in Baltimore County

The imposing, Tudor-style home in bucolic Pikesville, Maryland, holds a lifetime of memories. Owner Kim Hammond grew up in this stately, stone residence, built in 1920 by famed Baltimore architect Laurence Hall Fowler as the guest house for a nearby estate. A veterinarian with a prominent Baltimore practice, Hammond had always dreamed of living in the family manse; after his mother’s death in 2014 at 94, he and his wife, Carol Elerding Hammond, decided to move in—with daughter Stella, now 12, and their three beloved dogs in tow.

However, the home had suffered wear and tear over the years, and before the move could happen, it needed updates that would accommodate the family’s modern, relaxed lifestyle. Kim had worked with Baltimore designer Mona Hajj on this and other houses in the past, so he and