Growing up in Addis Ababa, Jomo Tariku liked to sketch the furniture and artifacts that his father, a military attaché for the Ethiopian government, collected from Africa and around the world. He drew the hand-carved Asian tables and Persian rugs in the living room, the Scandinavian dining room set and the African masks, carved ivory tusks and copper trays from Zambia, the Congo, Zaire and Kenya. “Our house was like a bazaar, very eclectic,” recalls Tariku, who never imagined that his exact representations of items at home would lead to a career as a furniture designer.

Among the mix, one piece made a lasting impression: the three-legged African stool. The legacy of this useful object, he says, “seeped into my psyche. Those craftspeople had more influence on my work than anyone else.” Today, three-legged African stools are sought-after accent pieces, pictured on the pages of luxury-home magazines around the world. Some of the designs may well be his.

Born in Kenya, raised in Ethiopia and now based in Springfield, Virginia, Tariku designs furniture rooted in his African heritage. At the same time, the bold outlines of his polished pieces distill familiar forms, cutting across cultures with contemporary authority. “I’m trying to interpret what an African-based furniture design would be, always with the goal of clean lines,” he says.

Like the everyday stools of his youth, Tariku’s pieces are made of wood—solid ash and walnut from the U.S., as well as mahogany and high-quality Baltic birch plywood. Ebonized or natural finishes often interplay light against dark. In his lathe-turned Mukecha stools, rows of black rings may alternate with white or other bright colors. “I like the contrast,” he notes.

Tariku’s signature Nyala chair was inspired by the Nyala antelope native to the Ethiopian mountains. While that graceful creature has four legs, the designer’s chair has just three, each elegantly tapered and outwardly curved. Its hand-carved backrest, resembling smooth animal horns, bends gently inward at the perfect height to double as an armrest. Minus the backrest, the chair becomes a refined, three-legged stool.

“I kept looking at images of this beautiful animal,” says Tariku, describing his approach to this and other designs. “It started as a sketch; I kept drawing for more than a month or two.” Looking back, he recounts, “The sketching part was easy. Finding a builder took much longer.”

Tariku has a small wood shop in the garage of his family townhouse “to work out my ideas,” he says, but does not build his pieces full-scale. For more than two years, he had been looking for someone to construct the Nyala chair, which he hoped to introduce at the 2018 Salone del Mobile Satellite show in Milan. Happily, a few months before the opening, he met master wood craftsman David Bohnhoff at Richmond’s Craft + Design show. Looking through Tariku’s sketchbook, Bohnhoff stopped at the Nyala chair and said, “I’d like to take on that challenge.” Tariku agreed enthusiastically, and the two have collaborated on fabricating the designer’s chairs ever since; woodworkers in Rockville, Baltimore and Texas currently build his less complicated stools.

Before construction begins, Tariku uses 3-D modeling to help visualize his concepts, construction methods, ergonomics and the overall design balance of each piece. “Until you make the real thing, it’s hard to know,” he says. In fact, four prototypes of the Nyala chair were required before he and Bohnhoff were happy with it.

Tariku studied industrial design at the University of Kansas. Until entering, he had never heard of the field, intending to major in fine art. His furniture designs bridge both. “I don’t want my pieces to be only beautiful. They have to be comfortable too. They shouldn’t say ‘don’t sit on me—I’m art,’” observes the designer, who also works as a data scientist at the World Bank.

Tariku feels the time is right to extend the reach of his modern pieces. That sense is buoyed by his participation in the Black Artists + Designers Guild, a collective formed in 2018 to increase black representation in the design world. The Guild has promoted its members’ work with exhibitions in New York, Houston and High Point, North Carolina.

The art and design of those with African origins, he says, “brings richness” to the design universe. Until now, his chairs and stools have been based on sub-Saharan African influences. He hopes to broaden those references to parts of northern Africa, and to produce a full line of contemporary African-style furniture—the subject of his college thesis.

Tariku looks forward to a time when he can present his work at shows in Ghana and Nigeria, where he has exhibited before. “Do I want to? Oh, yes,” he beams. “All that’s coming.”

Thu Aug 13 , 2020
Like Architecture & Interior Design? Follow Us… Warmth exudes from these three modern home interiors, through rich brown and grey colour palettes, natural wood tone and soft lighting. Such a palette feels like a hug to come home to, or an inviting blanket to snuggle up in. However, there is […] 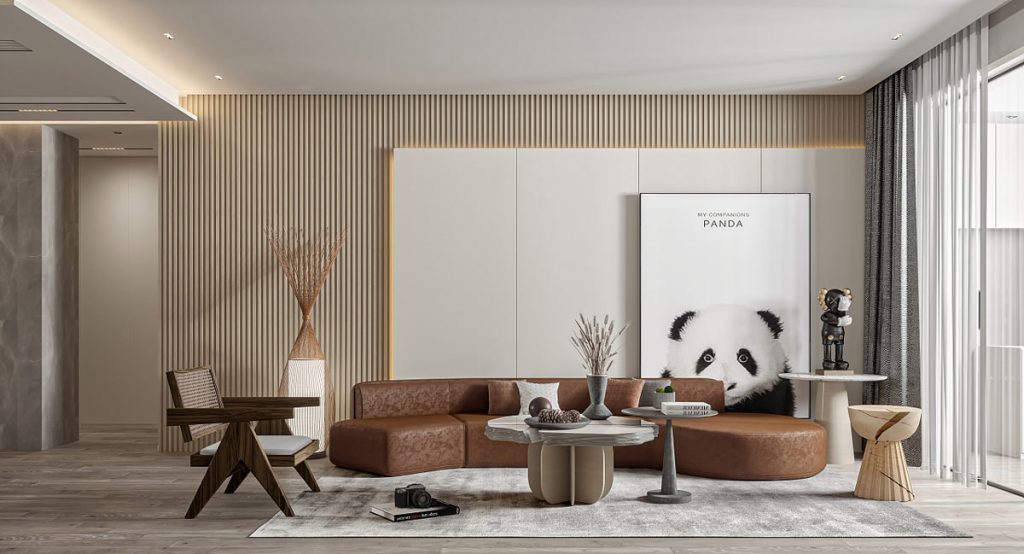