A new home hewn from organic materials respects its pristine setting on the banks of the Potomac River, overlooking Mount Vernon

Inspired by the natural beauty of the Potomac River, George Washington once wrote that no estate in America was “more pleasantly situated” than his beloved Mount Vernon.
Today, Jennifer Brooks can make that claim from a sparkling retreat directly across the Potomac from the first president’s Virginia farm. Though a storybook view of Washington’s white-columned porch is prominent, her shingled residence on the Maryland shoreline disappears into the pines and cedars. This self-effacing design was the genius of architect Greg Wiedemann, who knew “blending in” would suit his client while ensuring approval by powerful stakeholders controlling development in Mount Vernon’s historic viewshed.

“It was a challenge,” the architect acknowledges. “We wanted to build in a way that really blended in with the landscape.”

Wiedemann’s portfolio includes splashy waterfront homes, but this site was in a class of its own. Situated in Maryland’s Charles County—a 20-mile drive from downtown DC—the plot is one of two in private hands on a point surrounded by 5,000-acre Piscataway Park, land governed for decades through purchases and easements with one goal: To preserve the woodland view that Washington enjoyed in the 18th century. (The park was founded in the 1960s, with acreage acquired by the Mount Vernon Ladies’ Association. The group has led preservation efforts since the 1940s, fending off a natural gas facility as recently as 2018.)

The first time Wiedemann walked the property, a bald eagle flew across his path. “It’s a wonderful natural site,” he enthuses. With due respect for Mount Vernon, Wiedemann recounts, his client made it clear: “We’re not going to build any white house with white columns.” Brooks, a marketing executive, and then-husband, John Agwunobi, who was an assistant secretary of health in the George W. Bush administration, set down roots in the area as students at Howard University. Careers led them to the West Coast, while their three children headed to West Point, Dartmouth and Temple University. Though they reside in California, both parents felt a “really incredible” place was needed to entice their kids to gather on the East Coast.

An old barn at river’s edge inspired the aesthetic for the project. The plan evolved into a farmhouse made from two rectangular boxes forming a two-story, L-shaped structure encompassing 4,000-plus square feet. Its peaked roof is set off by a stone chimney and a screened porch in the treetops. A façade of bark-gray shingles, cedar-toned siding, dark mocha steel-framed windows and non-glare glass merges into the landscape. “We wanted to choose materials that would pick up the tones of the trees and the foliage,” Wiedemann says.

A light-filled wing projects toward the river, giving the open-plan living-dining-kitchen space prime views. The second wing is set back at right angles, providing privacy for a family/media room and guest bedroom. Upstairs are two bedrooms and an owner’s suite with its own screened porch.

Wiedemann chose the wall color, soft White Dove from Benjamin Moore. Interior designer Vivian Braunohler of Braunohler Design Associates specified low seating and neutral upholstery to maximize views. “When you look through the space, nothing interrupts the eye,” she points out. “You’re looking right out to the Potomac River.”

Nature plays out in a barn-beamed ceiling in the dining room, where a live-edge table is hewn from a Maryland black walnut tree. Breakfast is taken on a slab of local elm. Wiedemann designed the kitchen as a stand-alone object, hiding function in spare, walnut-stained cabinetry.

Upstairs, Braunohler admits her “first instinct” was to paint a reclaimed-wood accent wall in the owner’s bedroom. But she resisted, explaining, “It really works well bringing the outside in.”

Layers of history permeate the site, which sits at the end of a mile-long shared gravel drive through woods frequented by osprey, hawks and so many eagles Brooks was inspired to name the retreat Eagles Point. The lone neighbor, visible through trees, is a yellow 1790 manor house known as Branitan, where a war hero-turned-spy settled in the 1940s, planted ornamental trees and entertained under an ancestral portrait by Gilbert Stuart.

The 6.7-acre plot acquired for the Brooks-Agwunobi project was cleaved from that estate, itself part of an 18th-century holding of more than 1,000 acres. A one-story, 1970s-era dwelling to which Branitan’s owners had downsized, was demolished but the barn remains at water’s edge. The day Brooks closed on the property, a letter arrived from the Mount Vernon Ladies’ Association entreating the new owners to “be respectful of the land.”

Brooks is planning for the future—a daughter’s riverside wedding will take place in May 2021—while she remains keen to honor the past, including the Piscataway tribe, which settled on the riverbank more than 800 years ago. “I want to find artwork of the Indian tribes that were here,” she says. “We want to recognize the people who were here first as well.”

And there were tobacco farmers, who, like George Washington, owned slaves. As an African American with ancestral roots in early Virginia, Brooks was moved when she found an 1844 “Bill of Complaint” documenting runaway slaves who were “never recaptured” by an “irresponsible” landowner. “This gave me a strong feeling of humility and responsibility to honor the history of the property, to respect those who were held there in bondage and denied their freedom,” she says. “It is in their memory that our family will be eternally grateful and devoted stewards of the land.”

Thu Feb 4 , 2021
Like Architecture & Interior Design? Follow Us… Adding colour with an accent sofa is a solid way to give a neutral living room a fun focal point. These two home interiors have implemented the colourful sofa trend into modern living rooms that are stylishly simple, giving the hero piece its […] 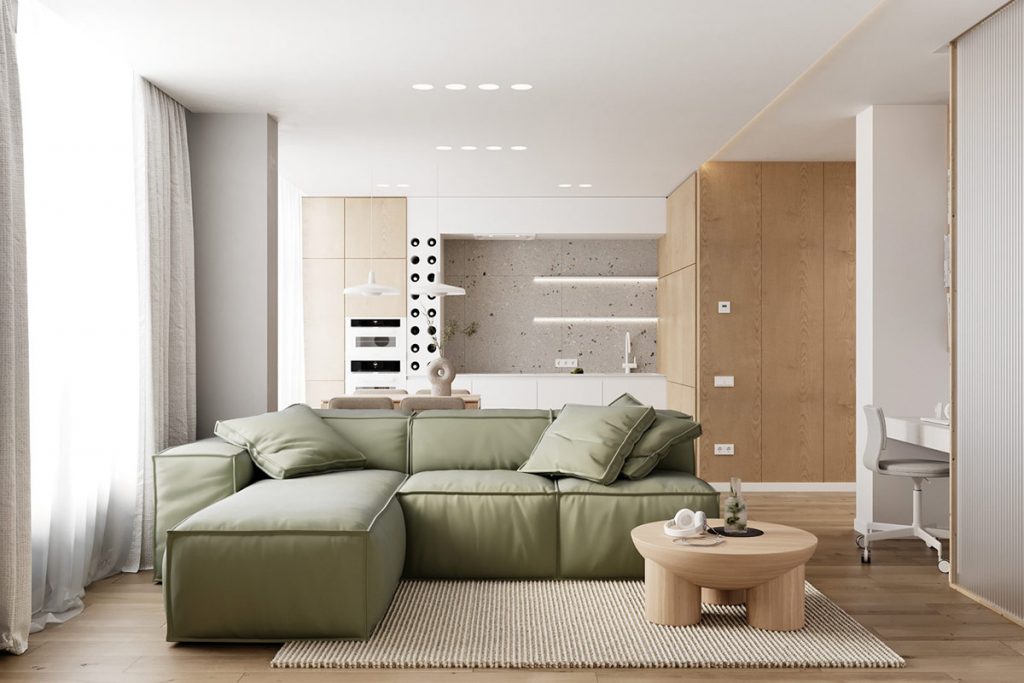