An historic, Federal-style home flourishes on the banks of Hunting Creek in Easton

Something magical happens during the drive past fields of sunflowers and acres of verdant farmland toward Still Waters Farm, the name former owners gave this property nestled near the tranquil headwaters of Hunting Creek in Easton. A sense of calm and contentment settles in.

“We used to own a getaway in Utah,” recalls Tom Frank, who shares the 265-acre property and its historic house with his wife, Lois. “But as our four kids grew up and we approached retirement, we decided we wanted a more local family compound, with easy access to outdoor activities.” The Easton spread not only replaced their vacation home, but also their permanent abode in Glen Arm, Maryland, where Tom worked as a marketing executive for his family’s retail packaging business.

The core of the stately Easton house was built in the late 1890s in classic Federal style, with a center hall and perfect symmetry. A major renovation by prior owners in 1992 added expansive wings on the left and right of the original home. During the 2000s, the five-bedroom, 5,500-square-foot home sat largely empty—until the Franks showed up and fell in love with it. “It was really perfect for us,” Tom enthuses. “We wanted plenty of land for privacy. I grew up hunting and fishing on the Eastern Shore and Lois grew up on a farm in Virginia.”

With the master suite on the ground floor, the layout also was ideal for aging in place. The upper floor boasts four ensuite bedrooms for when their children visit. “We often go from two to 12 on the weekends,” recounts Frank. “The house is roomy enough to accommodate everyone, but also comfortable and cozy.” Even the rear and side rooms boast stunning water views.

Once the Franks purchased the property in 2015, they hired Cappa Builders and Kitchen Creations, both based in Easton, for renovations and updates. Though rotting wood porches on the front and back of the house were replaced with hardier brick and composite versions, the structure was otherwise in good condition. The biggest remodel opened up the space between the kitchen, family and dining rooms, allowing for better flow and an open plan. The completely overhauled kitchen now boasts a nautical vibe conveyed via a beamed shiplap ceiling and built-in, L-shaped banquette and pedestal table reminiscent of a yacht.

When it was time to furnish the renovated interiors, the Franks happened into Bountiful Home, a home-goods emporium in Easton. They were having trouble finding the right paint color for their kitchen and asked for advice. “Some of our best ‘accidental’ design clients come into the shop because they’ve heard about us and then realize we offer interior-design services,” says Jamie Merida, who owns Bountiful and spearheads Jamie Merida Interiors, the design arm of the business.

The discussion not only helped the Franks select a grass-cloth finish for the kitchen walls, but ultimately led them to tap Merida and colleague Carol Wheeler to help them fully furnish—and finish—their forever waterfront home on the Eastern Shore. “I’m in and out of a lot of houses, and right away both Carol and I found this to be a very gracious home; it just feels calm, peaceful and happy,” Merida relates. “The clients are unpretentious. They like to entertain and have their kids visit. They wanted it to be elegant and welcoming but not stuffy.”

The Franks described their vision for the overall design as Eastern Shore transitional. With this ideal in mind, the designers suggested a palette built on the butter-yellow of some existing walls, with the addition of blues and whites. New furnishings are strong and classic, many made of mahogany, to stand up to the historical provenance of the residence. “We helped the Franks find timeless, classic pieces to complement their historic home,” says Merida. He and Wheeler also wove family heirlooms into the mix, including settees in the living room that were inherited from Tom’s mother and refreshed with Greek-key trim.

“The dining room décor is very much in our signature Tidewater style,” says Merida of the elegant space grounded by an expandable, round mahogany dining table paired with carved-back, Empire-style chairs. Wheeler selected a sisal rug and transitional chandelier to keep things fresh. Botanical prints add another layer of interest.

The owners’ bath received a major overhaul. Originally comprised of two his-and-her bathrooms off the couple’s bedroom, it’s now one expansive room with deep-blue walls and a double vanity. The space overlooks fields of sunflowers.

“I like that this house is not just any waterfront home. It’s a gracious, 19th-century farmhouse that could be anywhere—including Kentucky, where I grew up,” Merida notes. “It just happens to be situated here beside the water, where it is so peaceful and calm.”

Sat Dec 5 , 2020
Like Architecture & Interior Design? Follow Us… Pink and blue interior designn has that wonderful mix of warm meets cool, sweetness meets soothing. It’s an emotional colour combo that feels like a happy hug. It is also a very youthful palette, so how does it translate into a more elegant […] 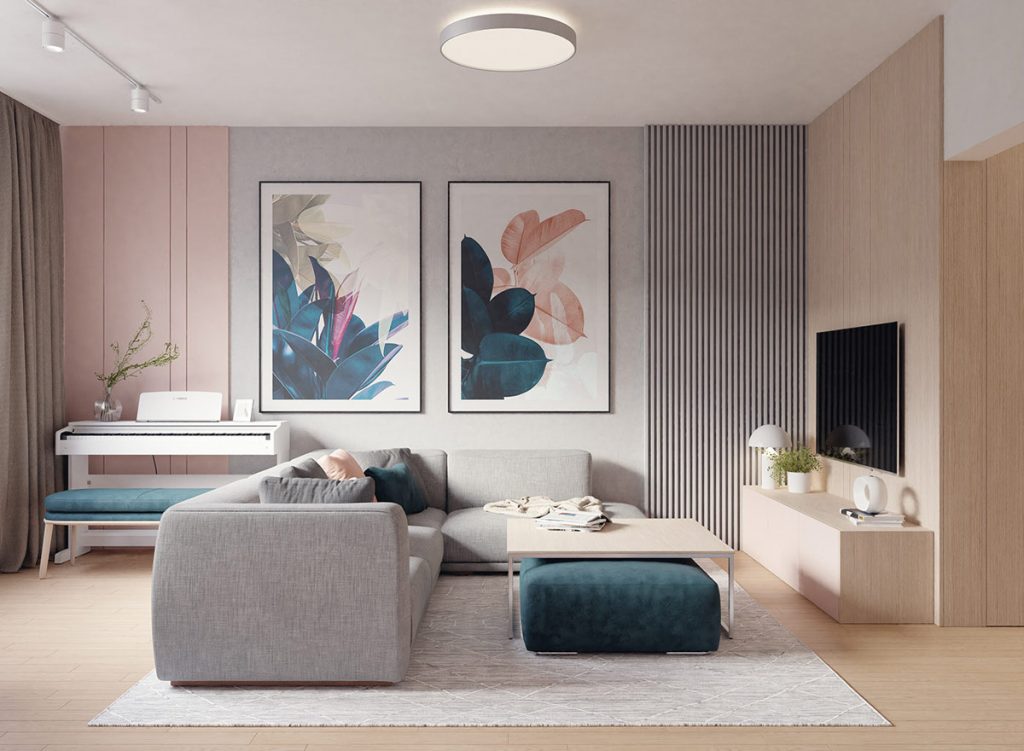 Photo essay: a weekend of Pride in Dallas